Daily Deals: Some republished backlist titles and a fantasy 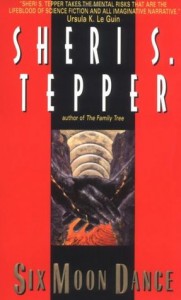 It was many years ago that humans came and settled the world of Newholme-cruelly bending the planet to their will; setting down roots and raising up cities and farms and a grand temple to their goddess.But now the ground itself is shaking with ever-increasing violence. And the Great Questioner, official arbiter of the Council of Worlds, has come to this isolated orb to investigate rumors of a terrible secret that lies buried deep within Newholme’s past—a past that is not dead, not completely. And it will fall to Mouche, a beautiful youth of uncommon cleverness and spirit, to save his imperiled home by dicovering and embracing that which makes him unique among humans. For every living thing on newholme is doomed, unless Mouche can appease something dark and terrible that is coiled within…and surrender to the mysterious ecstatic revelry taht results when the six moons join.

Reviews for the book are mixed ranging from “an absolute gem” to a “discombobulated mess”. The reviews do agree that the book has a slow start. Lugubrious one reviewer said. In sum, slow moving but thought provoking and maybe overworked at some junctures. 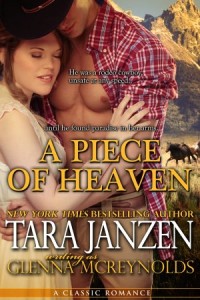 HE WAS A RODEO COWBOY, UNSAFE AT ANY SPEED…

Travis Cayou landed in Laramie, Wyoming hurting everywhere, bad in the places he hadn’t broken, and worse in the places he had – but he was home, and that was the only thing that counted. He’d been born and raised on the Cayou Land and Cattle Company, and he was done running from his memories and the bad blood between him and his brother. He knew he’d have a fight on his hands, and he was ready. Ready for everything except the ranch’s gorgeous new foreman, a beauty with untamed ebony hair and aquamarine eyes.

UNTIL HE FOUND PARADISE IN HER ARMS.

Callie Michael knew Travis was a good-for-nothing rodeo cowboy – but even busted up, broke down, saddlesore, and road weary, six foot of nothing had never looked so good. From under the brim of his black Stetson, his smile made the kind of promises most women dreamed about and most men couldn’t keep, but Callie knows cowboys, and she doesn’t expect Travis to stick around long enough to be anything but trouble. The cowboy knows different, but can Travis convince her he’s home for good – and that he’ll stop at nothing to claim Callie for his own, to have and to hold her forever…

Tara Janzen aka Glenna McReynolds wrote several books for the Bantam Loveswept line. She is republishing them digitally. The reviews for most of these books are sparse. The one review at BN called the hero sexy as sin but the heroine weak. Weak heroines seem to be a continual complaint about these Janzen Loveswept books. 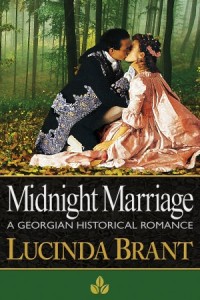 Midnight Marriage by Lucinda Brant. $Free at AMZN and BN.

Stand-alone sequel to Noble Satyr. Twelve-year-old Deborah is married off at midnight to sixteen-year-old Julian, the handsome but volatile heir to the Roxton Dukedom, who then disappears from her life. Nine years later, Julian returns incognito to consummate his marriage before Deborah can be seduced by Julian’s nemesis and half-brother. Can Deborah forgive Julian’s cruel deception?

This author previously published with Random House under the penname Louise Grant. The lower ratings don’t have text reviews with them. The one three star rating on Amazon downrated the book on the basis that it didn’t seem believable the heroine would be able to speak freely and make demands of her family. 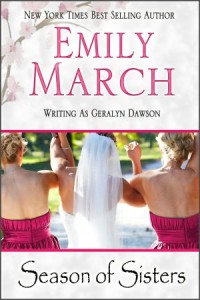 Holly Weeks loves her boyfriend, but he miscalculated when he dragged her to a wedding gown sale. Marriage isn’t one of her life goals, and a pretty dress won’t change her mind. Nothing can change it – to her secret despair.

After her husband forgets their 25th wedding anniversary, Maggie Prescott finds herself lonely and abandoned in her empty nest. So she decides to donate her wedding gown to a good cause. Why would she hold on to either the man or the dress?

Grace Hardeman, a volunteer at the sale, has only one wish – to be enveloped in the warmth of her family as she celebrates her Golden Anniversary. But soon she unwittingly adopts a new goal: survival.These three women find themselves at turning points in their lives, and their unlikely friendship forges a bond of sisterhood – the last defense against a broken heart.SEASON OF SISTERS is a full-length, contemporary women’s fiction novel, originally published by Pocket Books with the title THE PINK MAGNOLIA CLUB written by Geralyn Dawson, a pseudonym for Emily March.

Reviews say this is a tear jerker due to Grace’s diagnosis of cancer and her husband’s refusal to accept that it is a terminal disease. Those who remember Dawson for a having a lighter touch may be caught off guard by the more somber tones of this book.