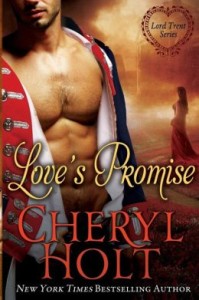 New York Times bestselling author, CHERYL HOLT, will sweep readers away with the first novel in her new and breathtaking ‘Lord Trent’ trilogy…

With the death of his older brother, Michael Wainwright, Viscount Henley, has become heir to his father, Duke of Clarendon. The Wainwright men are renowned cads, and as his brother’s will is read, it’s discovered that he sired an illegitimate son and has left the eight-year-old boy his entire fortune. Michael decides to bring the boy to London so he can be showered with all the wealth and status guaranteed by his inheritance. But first, he has to gain custody from the boy’s aunt, who is determined to keep her nephew away from Michael’s dissolute family.

Frances “Fanny” Carrington has always lived in a small village in the country. As a newborn, she was left in a basket on the church steps and raised by the vicar and his wife. But they’ve died, and Fanny is in dire straits, struggling to raise her nephew, to keep food on the table and a roof over their heads. When she begins to receive correspondence from Michael, asking for custody, she can’t help but be suspicious. For years, the Wainwrights have refused to claim her nephew or provide financial assistance to him. She’s alarmed by their sudden interest. What can it mean?

As Michael finally meets Fanny, their attraction is swift, blatant, and dangerous. He can’t fight the need to have her at any cost, and gradually, he lures her into his decadent life of affluence and privilege. But she’s never possessed the callous nature required to thrive in the cut-throat world of the aristocracy, so she could never understand the peril she faces from those who would do anything to keep them apart…

Several of Cheryl Holt’s titles are on sale for 99c. I’m not familiar with Holt’s backlist and from the brief internet searching I’ve done, this appears to be a new title. Holt’s books often don’t work for me, but she’s had a lot of staying power in the industry which means she works for many other readers. 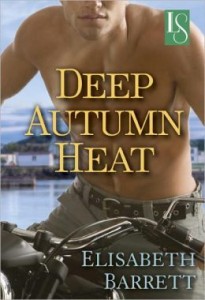 In this sexy new Star Harbor romance series, featuring the too-tempting Grayson brothers, a celebrity chef turns up the heat for a local café owner—and things start to sizzle.

Lexie Meyers decides there’s nothing sweeter than watching Sebastian Grayson’s perfect, wicked mouth devour her coconut cake. He’s hot, he’s hungry, and he’s sizing her up like she’s the best thing on the menu. But she’s been burned in the past and flings just aren’t her thing. Too bad Sebastian can’t resist a challenge.

Worldly, famous, and notorious with the ladies, Seb had planned a weekend of fishing and relaxation with his brothers. Until Lexie, with her kissable lips and frosty “get lost” attitude, makes him want to forget his culinary empire and create some magic with her. After he fires up his charm—including challenging her to a televised cook-off to break through her resistance—it’s now hotter in the bedroom than it is in the kitchen and Lexie isn’t sure whether she’s lost her mind . . . or just her heart.

Includes a special message from the editor, as well as excerpts from these Loveswept titles: Here Comes the Bride, The Wedding Chase, and About Last Night.

I didn’t love this book but for others it might work. Chefs are hot right now. I’m not sure if it is the rise of Gordon Ramsey in America or the hot male chefs on Top Chef? As an aside, I ate at Dale Taldes restaurant in Brooklyn while I was in NYC and it was worth the trip out from Manhattan to Brooklyn for it. Totally enjoyed my meal there. The service was great. The food portions were sizeable. Dale greeted customers at the door and my daughter said that they made the best Shirley Temples of any restaurant we ate at. 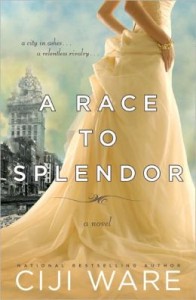 “Blindly, she inched along a floor pitching as violently as the deck of a boat in a midwinter storm. Her hands touched the threshold opening onto the ninth floor foyer at the instant the glass transom over her head exploded into a thousand pieces. Reflexively, Amelia cast her right arm in front of her face, but not before blood spurted from her scalp and ran down her checks. She crumpled beneath the doorframe, curling into a ball. Amelia screamed again as a twenty-five-foot expanse of wood paneling and masonry pitched outward and plunged nine stories to Montgomery Street below. She knew that no structure on landfill, no matter how well built, could withstand much more shaking without collapsing.

Then, just as suddenly, the convulsions subsided.”

Early in 1906, the ground in San Francisco shook buildings and lives from their comfortable foundations.

Amidst rubble, corruption, and deceit, two women-young architects in a city and field ruled by men-find themselves racing the clock and each other during the rebuilding of competing hotels in the City by the Bay.

Based on meticulous research, A Race to Splendor tells the story of the audacious people of one of the world’s great cities rebuilding and reinventing themselves after immense human tragedy. Filled with courage, passion, and conflict, Amelia Bradshaw’s spirit will capture your imagination as she strives to redraft her life amidst the ruins with both help and hindrance from a wayward son of privilege who pulls her into worlds she’d never have known.

RT Book Reviews says “Meticulously researched, this richly detailed novel, whose earthquake scenes are so real that readers will believe they are witnessing the event, will enthrall… an unforgettable story. 4 1/2 Stars” 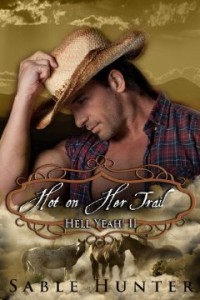 Hot on Her Trail by Sable Hunter. $ Free at Amazon.

Their relationship is complicated by the fact that, A – they’ve never met before and B – she’s a virgin.Jessie is determined not to be a burden to the McCoy family.As far as she’s concerned, she is just passing through.Jacob has a different opinion – he wants Jessie in his life, in his bed and in his heart.

I kind of had to include this deal when I saw it was for free. Kelly, aka Instalove, is now a reviewer for Dear Author. Back in the day, though, she authored a few guest reviews of the Hell Yeah! series. “Hot on Her Trail” was one of them. In the review, Kelly writes: “Jacob’s world would never be the same. In less than twenty-four hours, it had become a place of wonder and hope. And it all centered on this beautiful, sweet woman that made every fiber of his being vibrate with need.

These books are crazy bad from the sounds of it and now it is free and you can see if you agree or disagree with Kelly’s point of view.

→ Jane
Previous article: REVIEW: The Lord of Wicked Intentions by Lorraine Heath
Next Post: SBTB/DA Bestsellers – 28 May to 4 June 2013