Daily Deals: A little laughter, a little fear for under $3 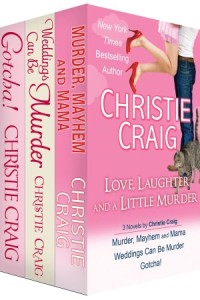 Love, Laughter and a Little Murder: 3 Novels by Christie Craig. $1.99.

Being A Mama Is Hard. But The Job’s Even Tougher When You’re Dead…

Cali McKay’s mama isn’t ready to pass over to the “other side” yet. Her unlucky-in-love daughter needs her now more than ever. Before Mama can chain-smoke her way to heaven, she’s gotta make sure Cali’s ex deadbeat boyfriend doesn’t get her daughter killed.

Cali lost her mom to cancer. Detective Brit Lowell, lost his partner to murder. Now he’s in the mood to take down some dirtbags and Cali’s ex just happens to be a dirtbag leaving a trail of dead bodies behind him. Can Brit trust this beautiful woman to help take down her ex? Can Cali look past this sexy cop’s hard exterior to trust him with her heart? Can life get any crazier when Mama starts meddling from the grave? Only one thing is for sure–none of it will matter, unless they catch a killer before the killer catches them.

WEDDINGS CAN BE MURDER:

Till Deaths Do You Part…

Katie Ray was about to marry a man she didn’t love — and who didn’t love her. Even losing her $8,000 engagement ring wasn’t enough of a sign to call things off. What did it take? Being locked in the closet with a sexy PI, and being witness to murder.

…Or They Bring You Together

Carl Hades hardly wanted to be shackled with another man’s soon-to-be-wife, especially when the gorgeous redhead stirred emotions he’d avoided for years. He’d been hired by an elite Houston wedding planner to investigate some missing brides. When those brides turned up dead, Carl saw where the whole situation was headed: just like Katie’s wedding ring and her ceremony, right down the toilet. Because, while Katie was suddenly and delightfully available, he had a feeling she was next in line to die. And before he could ask her to say “I do,” he had to know who would say “I did it.”

Macy Tucker was five years old when her beloved grandfather dropped dead in his spaghetti. At twelve, her father left his family in the dust. At twenty-five, her husband gave his secretary a pre-Christmas bonus in bed, and Macy gave him the boot. To put things lightly, men have been undependable.

That’s why dating’s off the menu. Macy is focused on putting herself through law school — which means being the delivery girl for Papa’s Pizza. But cheesier than her job is her pie-eyed brother, who just recently escaped from prison to protect his new girlfriend. And hotter than Texas toast is the investigating detective. Proud, sexy…inflexible, he’s a man who would kiss her just to shut her up. But Jake Baldwin’s a protector as much as a dish. And when he gets his man — or his woman — Macy knows it’s for life.

This three book set is $1.99 at both BN and Amazon. There is also a ton of extra matter in the bundle including excerpts for other books but these appear to be three full length novels. 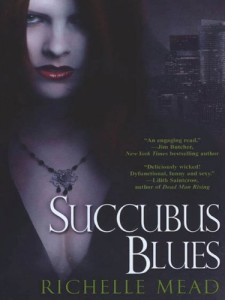 When it comes to jobs in hell, being a succubus seems pretty glamorous. A girl can be anything she wants, the wardrobe is killer, and mortal men will do anything just for a touch. Granted, they often pay with their souls, but why get technical?
But Seattle succubus Georgina Kincaid’s life is far less exotic. At least there’s her day job at a local bookstore–free books; all the white chocolate mochas she can drink; and easy access to bestselling, sexy writer, Seth Mortensen, aka He Whom She Would Give Anything to Touch but Can’t.

But dreaming about Seth will have to wait. Something wicked is at work in Seattle’s demon underground. And for once, all of her hot charms and drop-dead one-liners won’t help because Georgina’s about to discover there are some creatures out there that both heaven and hell want to deny. . .

It’s only $1.00 at Amazon but it’s such a good price that I could not resist posting it. I even reviewed this book back in 2007 when it was released:

A cast of a thousand men appear in this book and many of them could be future love interests for Georgie which makes me leery of future books. [I like to call this the Anita Blake effect]. There was also an issue I had with an event at the end of the story which I felt was unexplained but in clarification I will state I thought while it was explained it seemed weak and contradictory to the fundamental rules that had been built up for Georgie and her world.

Having said that, Georgie is very appealing. The dialogue is smart and the story sped by. I will definitely be aboard for another book. 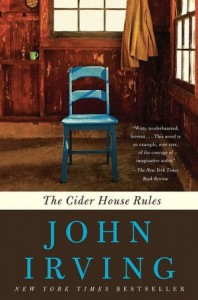 First published in 1985, The Cider House Rules is John Irving’s sixth novel. Set in rural Maine in the first half of this century, it tells the story of Dr. Wilbur Larch – saint and obstetrician, founder and director of the orphanage in the town of St. Cloud’s, ether addict and abortionist. It is also the story of Dr. Larch’s favorite orphan, Homer Wells, who is never adopted.

I think it might be said that this is a modern classic. 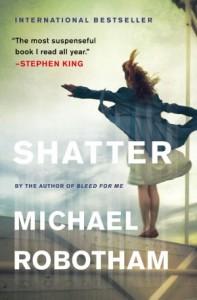 Joe O’Loughlin is in familiar territory-standing on a bridge high above a flooded gorge, trying to stop a distraught woman from jumping. “You don’t understand,” she whispers, and lets go. Joe is haunted by his failure to save the woman, until her teenage daughter finds him and reveals that her mother would never have committed suicide-not like that. She was terrified of heights.

What could have driven her to commit such a desperate act? Whose voice? What evil?

Having devoted his career to repairing damaged minds, Joe must now confront an adversary who tears them apart. With pitch-perfect dialogue, believable characters, and astonishingly unpredictable plot twists, Shatter is guaranteed to keep even the most avid thriller readers riveted long into the night.

This book is part of a series. The negatives review say good but predictable and that’s a fairly positive negative review.