Daily Deals: Seamstresses, both modern and historical with a confectionaire thrown in 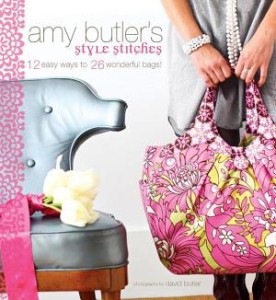 Now in ebook for the first time ever!

Celebrated designer Amy Butler’s most coveted products are her handbag sewing patterns. In Style Stitches, Butler presents an array of new bag designs for her fans across the globe. The ebook offers 12 basic patterns with enough variations to achieve 26 unique looks. Ranging from chic clutches and delicate wristlets to pretty hobo bags and handy coin purses, with instructions for altering dimensions, straps, and embellishments to get the desired look, each project incorporates Butler’s fresh, modern style and attention to detail. This very special ebook includes illustrated step-by-step directions, a comprehensive techniques section, and instructions for how to print the patterns themselves, making an essential and fashionable addition to every sewer’s digital library.

Some of you may not know this about me, but I used to be an avid seamstress and before I had a book blog, I actually wrote pattern reviews and blogged about my sewing. Sometimes in my dark book blogging days I think I should’ve been a craft blogger.

Amy Butler has some marvelous purse patterns and I’ve made a couple but it ain’t easy. That said, I’m sure I paid about 8x the cost of this for an Amy Butler pattern book. I put this under “really good deal” category. 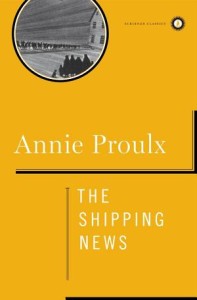 Winner of the Pulitzer Prize and the National Book Award, The Shipping News is a celebration of Annie Proulx’s genius for storytelling and her vigorous contribution to the art of the novel.

Quoyle, a third-rate newspaper hack, with a “head shaped like a crenshaw, no neck, reddish hair…features as bunched as kissed fingertips,” is wrenched violently out of his workaday life when his two-timing wife meets her just deserts. An aunt convinces Quoyle and his two emotionally disturbed daughters to return with her to the starkly beautiful coastal landscape of their ancestral home in Newfoundland. Here, on desolate Quoyle’s Point, in a house empty except for a few mementos of the family’s unsavory past, the battered members of three generations try to cobble up new lives.

Newfoundland is a country of coast and cove where the mercury rarely rises above 70 degrees, the local culinary delicacy is cod cheeks, and it’s easier to travel by boat and snowmobile than on anything with wheels. In this harsh place of cruel storms, a collapsing fishery, and chronic unemployment, the aunt sets up as a yacht upholsterer in nearby Killick-Claw, and Quoyle finds a job reporting the shipping news for the local weekly, the Gammy Bird (a paper that specializes in sexual-abuse stories and grisly photos of car accidents).

As the long winter closes its jaws of ice, each of the Quoyles confronts private demons, reels from catastrophe to minor triumph — in the company of the obsequious Mavis Bangs; Diddy Shovel the strongman; drowned Herald Prowse; cane-twirling Beety; Nutbeem, who steals foreign news from the radio; a demented cousin the aunt refuses to recognize; the much-zippered Alvin Yark; silent Wavey; and old Billy Pretty, with his bag of secrets. By the time of the spring storms Quoyle has learned how to gut cod, to escape from a pickle jar, and to tie a true lover’s knot.

Winner of the 1993 National Book Award and the 1994 Pulitzer Prize.

PW says “Proulx routinely does without nouns and conjunctions–“Quoyle, grinning. Expected to hear they were having a kid. Already picked himself for godfather”–but her terse prose seems perfectly at home on the rocky Newfoundland coast. She is in her element both when creating haunting images (such as Quoyle’s inbred, mad and mean forbears pulling their house across the ice after being ostracized by more God-fearing folk) and when lyrically rendering a routine of gray, cold days filled with cold cheeks, squidburgers, fried bologna and the sea.” 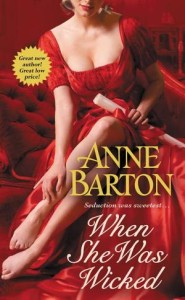 SOME RULES SIMPLY BEG TO BE BROKEN

A dressmaker in London’s busiest shop, Miss Anabelle Honeycote overhears the ton’s steamiest secrets-and (occasionally) uses them to her advantage. It isn’t something she’s proud of, but the reluctant blackmailer needs the money to care for her gravely ill mother. To make up for her misdeeds, Anabelle keeps to a firm set of rules:
Never request payment from someone who cannot afford it.Never reveal the secrets of a paying client.
Never enter into any form of social interaction with a client.

Her list keeps her (somewhat) honest-until she encounters Owen Sherbourne, the Duke of Huntford.
Not only does Owen nip Anabelle’s extortion plans in the bud, the devilishly handsome Duke soon has the sexy seamstress dreaming of more than silks and satins. With Owen Anabelle enjoys pleasures she never imagined. . . until a scandal from the past resurfaces. Now her rules could mean his family’s ruin. Owen’s searing kisses carry the promise of passion, but how will he react when Anabelle’s most devastating secret is finally revealed?

Hmm, a blackmailer. That doesn’t sound promising, but E from Bookpushers says this, “Anabelle really was a good person, she was just in a desperate situation. Her mother was really sick and her job as a dressmaker didn’t pay enough for the doctor, medicine, rent, and food so she did what she had to do. However, because Anabelle didn’t want to hurt anyone she stuck to her rules and she kept her word. Then one day she chose the wrong victim and ended up violating her third rule. “ 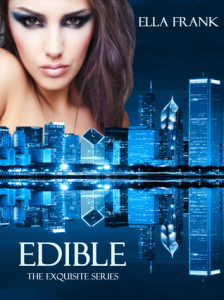 Rachel Langley is more than familiar with those three words in her line of work. After all, she spends her afternoons and evenings creating desserts so divine that your mouth will water and your taste buds will tingle.

They aren’t, however, the words she would have ever expected to think of when she locks eyes with a certain lawyer she knows only as Cole.

With each encounter, the infuriatingly persistent man becomes more impossible to resist, and edible is the exact word that comes to mind.

Cole Madison knows exactly what he wants, and Rachel Langley is it. From the moment he spotted her at Whipped, he knew he wanted to grab hold and take a bite.

However, the woman has enigmatic moves, avoiding him at every turn.

But not for much longer.

Rachel’s time is up, and as far as Cole is concerned, he’s waited too long for a taste of what he desires. Nothing, including the woman herself, will stop him from consuming what he hungers for.

The only question left is: Who will take the first bite?

This is a self published author and I believe each book in the series is a stand alone novel. There aren’t many negative reviews but one reviewer indicated the brevity of the relationship (they marry within a week) detracted from the overall story.