Troubled young Fawn Bluefield seeks a life beyond her family?s farm. But en route to the city, she encounters a patrol of Lakewalkers, nomadic soldier?sorcerers from the northern woodlands. Feared necromancers armed with mysterious knives made of human bone, they wage a secret, ongoing war against the scourge of the “malices,” immortal entities that draw the life out of their victims, enslaving human and animal alike.

It is Dag-a Lakewalker patroller weighed down by past sorrows and onerous present responsibilities-who must come to Fawn?s aid when she is taken captive by a malice. They prevail at a devastating cost-unexpectedly binding their fates as they embark upon a remarkable journey into danger and delight, prejudice and partnership . . . and perhaps even love.

I really loved this low key and interesting fantasy from Bujold. The series lost steam for me, but the first couple books were lovely. My review is here. 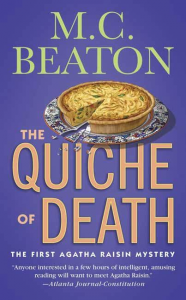 Putting all her eggs in one basket, Agatha Raisin gives up her successful PR firm, sells her London flat, and samples a taste of early retirement in the quiet village of Carsely. Bored, lonely and used to getting her way, she enters a local baking contest: Surely a blue ribbon for the best quiche will make her the toast of the town. But her recipe for social advancement sours when Judge Cummings-Browne not only snubs her entry—but falls over dead! After her quiche’s secret ingredient turns out to be poison, she must reveal the unsavory truth…

Agatha has never baked a thing in her life! In fact, she bought her entry ready-made from an upper crust London quicherie. Grating on the nerves of several Carsely residents, she is soon receiving sinister notes. Has her cheating and meddling landed her in hot water, or are the threats related to the suspicious death? It may mean the difference between egg on her face and a coroner’s tag on her toe…

It’s back on! I profiled this book earlier this week and then the price strangely increased. Who knows what price it will be when this deal posts. M.C. Beaton is a British cozy mystery author. This is the first book in the Agatha Raisin mystery series. Raisin is a 53 year old recent retiree who solves crimes, on accident. For some reason, this goodreads review tickled my fancy:

Rated PG-13 for mild language at times, mild to moderate sexual references, for some mild crude language, some scenes of mild drinking and smoking (all done by adult characters). It also has a mild dash of mature themes, along with a little bit of violence.

It kind of makes the book all the more interesting – sex, vulgarity and violence! 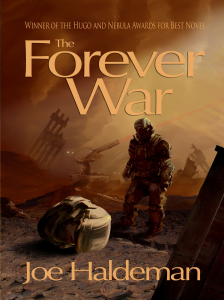 In the 1970s Joe Haldeman approached more than a dozen different publishers before he finally found one interested in The Forever War. The book went on to win both the Hugo and Nebula Awards, although a large chunk of the story had been cut out before it saw publication. Now Haldeman and Avon Books have released the definitive version of The Forever War, published for the first time as Haldeman originally intended. The book tells the timeless story of war, in this case a conflict between humanity and the alien Taurans. Humans first bumped heads with the Taurans when we began using collapsars to travel the stars. Although the collapsars provide nearly instantaneous travel across vast distances, the relativistic speeds associated with the process means that time passes slower for those aboard ship. For William Mandella, a physics student drafted as a soldier, that means more than 27 years will have passed between his first encounter with the Taurans and his homecoming, though he himself will have aged only a year. When Mandella finds that he can’t adjust to Earth after being gone so long from home, he reenlists, only to find himself shuttled endlessly from battle to battle as the centuries pass. –Craig E. Engler

A two star review was left for the frequent use of the “f-bomb” otherwise, the reader enjoyed the book. Most reviewers state that it is one of the best science fiction novels ever. 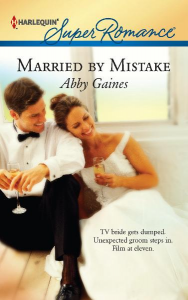 Do not adjust your set. That really was Casey Greene being jilted by her fiancé on live TV! And that really was Memphis’s most eligible bachelor who stepped in to marry her instead.

Millionaire businessman Adam Carmichael wanted only to help Casey save face. He isn’t prepared for the news that their “fake” wedding is legal and binding.

While they secretly wait for an annulment, media and family scrutiny forces them to put on their best loving-couple act. Except by now, neither one is quite sure who’s acting….

It is free and I needed to put a romance deal out there. I don’t recall reading Abby Gaines before. The HSR line is wildly different from more modern and sexy romances from Sarah Mayberry to the outdated and closed door stories of Lenora Worth. This one apparently falls in the “too much sex category” according to a review on Amazon. Click. (That was me hitting the buy it now button)