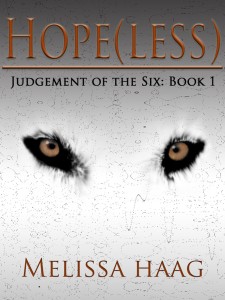 Our world is being judged and we remain unaware.

In a world filled with people, Gabby is uniquely alone. The tiny glowing sparks filling her mind that represent the people around her confirm it. Clueless regarding the reason behind her sight and her place in the world, Gabby struggles to find the answers she needs.

A revelation leads Gabby to a secluded wooded location… An introduction sends her running back home, but not quite alone…

This available free on Smashwords through April 5, 2013 with the use of Coupon Code RH99W and $1.99 elsewhere. The author of this book contacted me. I have no idea if it is any good, if it has any decent editing, but I thought I’d throw it out there. I have it marked on my TBR list because it is a werewolf book. I love those.

The cover reminds me of another book. Anyone? 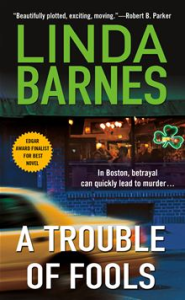 The first book in the Carlotta Carlyle series!

Linda Barnes’s A Trouble of Fools is the book that introduced readers to ex-Boston cop and PI Carlotta Carlyle, who knows trouble when she sees it like the old Irish lady offering a grand in cash to find her brother…

TROUBLE…
Since being bounced from the Boston police for insubordination after six years of service, Carlotta Carlyle has set up shop as a private investigator ready to deal with anything from lost pets to substantially grander larcenies. Though Carlotta, a six-foot-tall, redheaded ex cop, part-time cabbie, and neophyte private eye, works out of her home, it’s rare that clients stop by unannounced. Especially clients like the genteel, reserved, elderly spinster Miss Margaret Devens.

ALWAYS COMES…
With cash flow problems and a caseload so light that she’s taken to reading her cat’s mail, Carlotta accepts the case of Miss Devens’s missing brother Eugene. Oddly enough, Carlotta knew Eugene when they worked together back at Green and White Cab. As far as Carlotta sees it, this case should be a pinch—until two thugs looking for money send her client to the hospital.

WHEN YOU LEAST EXPECT IT…
The old lady’s missing brother seems to have been involved in something much more dangerous than simply driving a cab. Carlotta is determined to do whatever it takes?work the cops, pose as a hooker, and even drive a cab again—to find Eugene before it’s too late.

This review suggests that the series ripens over time (which is rare because usually you see series kind of flatten off or drop in terms of quality). 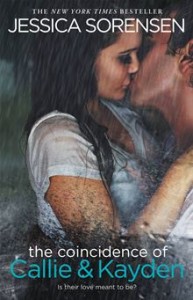 The Coincidence of Callie & Kayden by Jessica Sorenson. $ .99

From the bestselling author of The Secret of Ella and Micha comes a mesmerizing novel of fate, friendship, and the healing power of love . . .

THE COINCIDENCE OF CALLIE & KAYDEN

For Kayden, suffering in silence was the only way to survive. If he was lucky, he could keep his head down, do as he was told, and make it through the day. But one night it seemed like his luck-and his life-might finally end . . . until an angel named Callie appeared just in time to rescue him.

Callie has never believed in luck. Not since her twelfth birthday when everything was taken from her. After the worst was over, she locked up her feelings and vowed never to tell anyone what happened. Now, six years later, she continues to struggle with the painful secret that threatens to consume her.

When fate lands Kayden and Callie at the same college, Kayden is determined to get to know the beautiful girl who changed his destiny. Quiet and reserved, Callie still fears letting anyone else into her world. But Kayden is certain that Callie has come back into his life for a reason. And the more he tries to be a part of her life, the more he realizes that, this time, it’s Callie who needs to be saved . .

The second book in the series, The Redemption of Callie & Kayden, is available as a pre-order for $2.99 (delivery August 6, 2013). I read Sorenson’s Secret of Ella and Micha but it didn’t work for me. The characters often acted differently than we were told they were going to act. Interestingly, though, there was a recent DA commenter who said that she was blown away by The Coincidence of Callie & Kayden and later read Secret of Ella and Micha and was disappointed by the latter. Of course, at 99c I’ve purchased this book but I won’t read it until the second has been released. (Because I’m tired of the cliffhangers) 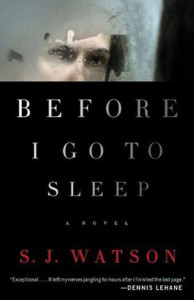 ‘As I sleep, my mind will erase everything I did today. I will wake up tomorrow as I did this morning. Thinking I’m still a child. Thinking I have a whole lifetime of choice ahead of me …’ Memories define us. So what if you lost yours every time you went to sleep? Your name, your identity, your past, even the people you love—all forgotten overnight. And the one person you trust may only be telling you half the story. Welcome to Christine’s life

This was reviewed by Janine who said: Despite the psychological acuity in the writing, or perhaps because of it, I did not enjoy reading the book. In fact, whereas some other readers couldn’t put it down, I found it difficult to pick it back up. There have been psychological thrillers I’ve loved, but the older I get, the harder it becomes for me to read about vulnerable characters in jeopardy. Christine was acutely vulnerable, and reading about her made me feel uneasy to an uncomfortable degree.

The cover of the advanced reader’s edition proclaims that rights have been sold in over thirty countries, and movie rights sold to acclaimed director Ridley Scott. There are blurbs from Tess Gerritsen and Dennis Lehane calling it “Quite simply the best debut I’ve ever read,” and “Exceptional,” respectively.