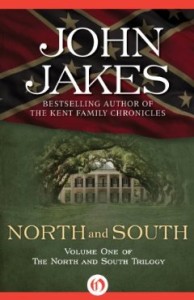 In the years leading up to the Civil War, one enduring friendship embodies the tensions of a nation. Orry Main from South Carolina and George Hazard from Pennsylvania forge a lasting bond while training at the United States Military Academy at West Point. Together they fight in the Mexican-American War, but their closeness is tested as their regional politics diverge. As the first rounds are fired at Fort Sumter, Orry and George find themselves on different sides of the coming struggle. In John Jakes’s unmatched style, North and South launches a trilogy that captures the fierce passions of a country at the precipice of disaster.

This ebook features an illustrated biography of John Jakes including rare images from the author’s personal collection.

I don’t know how many have read the book but I do know that much of Romancelandia has watched the mini-series due to a campaign launched by Kristie J. 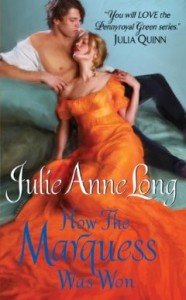 Rapidly rising romance star Julie Anne Long is making an indelible mark with her smart, sensual, richly emotional love stories, especially her unforgettable Pennyroyal Green novels. The fourth delectable Pennyroyal Green affair, Long’s How the Marquess Was Won is a “keeper”–the story of a beautiful orphan from the streets of Regency London, now refined, who inadvertently bewitches the dashing nobleman whom England’s scandal sheets have dubbed “Lord Ice.” A multiple RITA Award, Romantic Times Reviewer’s Choice Award, and Holt Medallion finalist, the incomparable Julie Anne Long is certain to win the hearts and eternal devotion of dedicated romance readers everywhere with How the Marquess Was Won.

The entire Pennyroyal Green series is on sale. I really love What I Did for a Duke and others here at Dear Author enjoy the entire series. The series in order is as follows: 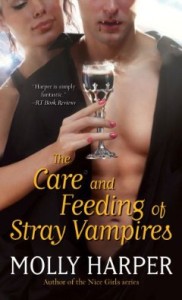 The Care and Feeding of Stray Vampires by Molly Harper. $ 2.99

“The thing to remember about a ‘stray’ vampire is that there is probably a good reason he is friendless, alone, and wounded. Approach with caution.”

Iris Scanlon, Half-Moon Hollow’s only daytime vampire concierge, knows more about the undead than she’d like. Running their daylight errands—from letting in the plumber to picking up some chilled Faux Type O—gives her a look at the not-so-glamorous side of vamps. Her rules are strict; relationships are purely business, not friendship—and certainly not anything more. Then she finds her newest client, Cal, poisoned on his kitchen floor, and her quiet life turns upside down.

Cal—who would be devastatingly sexy, if Iris thought vampires were sexy—offers Iris a hefty fee for hiding him at her place. And even though he’s imperious, unfriendly, and doesn’t seem to understand the difference between “employee” and “servant,” she agrees. But as they search for who wants him permanently dead, Iris is breaking more and more of her own rules . . . particularly those about nudity. Could it be that what she really needs is some intrigue and romance—and her very own stray vampire?

This book is well reviewed and I’ve heard good things about the author but have not read her myself. Sophia from FictionVixen writes: “In a vampire romance I always expect an overbearing alpha male who growls and tries to run the show. Cal is a little different. Oh he’s bad-ass and is not to be messed with and all that, but because of his circumstances he needs Iris and the help she can offer. He’s not totally at her mercy but he does need Iris and their adversarial relationship evolves into one of mutual respect and admiration as Iris and Cal get to know each other. Oh, and the sexual tension is fun too” 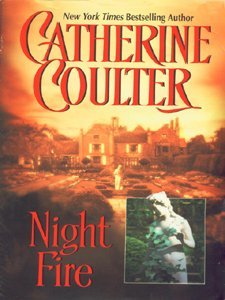 Night Fire, the first of the Night Trilogy, was first published in early 1989. I haven’t rewritten it, just cleaned it up a bit and Avon books has given it a wonderful new cover.

Arielle Leslie is a sixteen-year-old girl forced to wed Paisley Cochrane, a sadistic old man who abuses her. When he dies, she believes herself free. But she’s not.

Burke Drummond, Earl of Ravensworth — a young man she’d worshipped three years before — is home from the wars, and he wants her. When he catches her, he’s in for an appalling surprise.

I hope Burke and Arielle are two people who will touch you as deeply as they touched me. They face problems and obstacles never spoken of in Regency times.

If you haven’t yet read Night Fire, do give it a try.

I’m sure I read this because back in the day I read everything Coulter wrote, but I can’t remember this book at all.