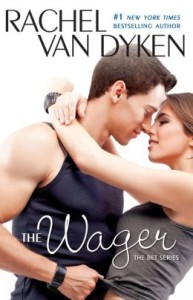 From the author of the #1 New York Times bestseller, THE BET

Lose a bet, lose your heart…

What is it about a junior-high crush that can send an otherwise intelligent woman into a tailspin? TV reporter Char Lynn wishes she knew. Jake Titus is too rich, too handsome, too arrogant: a trifecta that once lured Char into the best night-and worst morning-after-of her life. Now they’ve been thrown together in a wedding party. It’s awkward, but survivable . . . until Jake stops acting like a jerk, and starts acting like the man she’d always hoped he could be.

If watching your brother marry your best friend is weird, being attracted to your best friend’s other best friend is downright bizarre. Unfortunately for Jake, Char hasn’t forgotten how he once tossed her aside. Worse still, Jake’s already-nutty grandma is even crazier about Char. Cue meet-cute shenanigans and all manner of meddling, and somehow, Jake’s falling. For Char. Now all he has to do is make her believe it . . .

This is another one that I hope you didn’t buy during release week (October 1) because it is now on sale for 99. 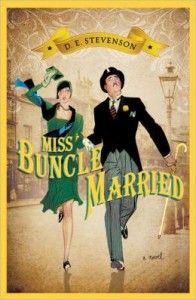 A Marriage and a Sudden Move to a New Town Won’t Slow This Mischievous Writer Down!

In this charming follow-up to Miss Buncle’s Book, the intrepid writer moves to a new town filled with fascinating folks…who don’t even know they might become the subjects of her next bestselling book.

Miss Buncle may have settled down, but she has already discovered that married life can’t do a thing to prevent her from getting into humorous mix-ups and hilarious hijinks.

A beloved author who has sold more than seven million books, D. E. Stevenson is at her best with the stories of Miss Buncle.

“And funny, in a way that’s intelligent without being difficult and cozy without turning sticky-sweet.”—Reader Review for the Miss Buncle books

When I saw this book I thought that Jayne either loved or hated it but then I saw Dear Author quoted in the editorial review section so I figured she must have loved it.  I looked up the review and she didn’t love it but she did feel it was a good read.

Once again, Barbara captures the people around her on the pages of her manuscript and her shrewd insight into their lives is – pretty much – on track. And where it isn’t, well it’s probably for the best. Yet there are scenes here that I hate to say I found boring and wondered at the time spent on them. The children of their neighbors get lots of page space but frankly I found them the little savages that Arthur does. In the first book, the oddities of her fellow villagers are described to show how Barbara saw them and used them in her novel. Here there are things described, such as one child’s sort of OCD personality and strange dreams that Barbara didn’t see or knew nothing about and thus that wouldn’t have even made it into her novel. And the frankly strange things these children do and their interpersonal relationships also don’t appear in Barbara’s third book effort. So…why did Stevenson include them in the book? To shine a light on modern child raising of the time?” 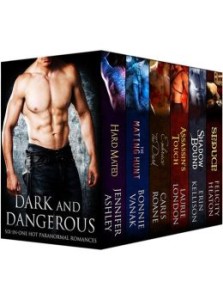 Dark and Dangerous by Jennifer Ashley. $ .99

HARD MATED by Jennifer Ashley
A USA Today bestselling book!
Spike, a wildcat Shifter and the champion fighter of Shiftertown, is stunned when Myka, the best friend of a dying human woman, announces that Spike has fathered a cub. What’s more, the mother is giving the boy to Spike to protect and raise.

Spike is torn between the cub and his duties as tracker to the Shiftertown leader, and begs sassy and sexy horse-training Myka, the only person who understands, to help him. When Spike’s job puts his cub and Myka in danger, Spike is forced to choose between those to whom he’s pledged his loyalty and his need to protect the woman and cub he’s come to love.

THE MATING HUNT by Bonnie Vanak
After a childhood trauma left Arianna Sanders terrified of sex, the only man the pretty Lupine werewolf desires is her fiercely protective guardian. But the sexy, mysterious shifter harbors a dark secret, one he’s determined to hide from Arianna.

Kyle Morgan hungers for the voluptuous Arianna and dreams of consummating the passion smoldering between them. When he’s forced into mating with her to save her life, he must tame the savage, sexual beast inside him before taking the virgin he’s vowed to protect from those hungering to claim her, including himself…

EMBRACE THE DARK, Book #1 of the Blood Rose Series, by Caris Roane
Will she fall to temptation and give herself to a vampire…
Abigail doesn’t mind doing business with the realm-world, until she discovers she’s a rare commodity called a blood rose, something designed to satisfy the deepest needs of a mastyr vampire. She wants nothing to do with that kind of power and servicing a vampire is just wrong. But Mastyr Gerrod’s resistance to her gift, as well as his hot hunkiness in his Guardsman uniform, soon turns her head and she bends her neck to receive a sharp pair of fangs. Mind-blowing sex, ecstasy, all good things follow. But how can she give up her human world to serve as a blood rose the rest of her life?

Former fashion designer Neyla Trihorn had the perfect life until a deadly accident revealed her latent para-abilities—now she’s the army’s hottest asset in their fight against invaders. Rickert D’Angelus, the dangerously sexy assassin from Cascadia, leads a group of warriors into New Seattle to stop enemy soldiers from finding the Iron Portal into his world.

When he captures the beautiful Protection-Talent, a passionate vision appears and stirs something deep inside him. Rickert must decide if it’s a Talent trick, designed to foil the enemy…or the answer to his deepest desires.

Adam Thorne founded the Segue Institute to study and destroy his monster of a brother, but the key to its success is held in the pale, slender hand of a woman on the run. There is something hauntingly different about Talia O’Brien, her unknowing sensuality, her uncanny way of slipping into Shadow. Twilight is the place between life and what comes after—a dark forest of fantasy, filled with beauty, peril, mystery. And Talia is about to open the door.

Bloodlust runs in Antoine’s veins, a dark master waiting for the day it will reign over him. Now a woman with a pure soul and wicked intentions has him in her sights and is determined to crack the ice around his heart, and she might save or damn him. But when Sera discovers the shocking truth about his past and the darkness that lurks within him, will she be strong enough to seize his heart with both hands and win him forever or will she lose him to the ghosts that still haunt him?
Show Less

I saw a box set the other day with like 6 authors and it intrigued me but the price was 4.99 and I thought – that’s crazy. Seriously, my mind is warped when it comes to box sets now. If it isn’t .99c I don’t want it. 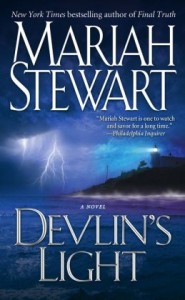 Though India Devlin left her hometown to pursue a brilliant career as a criminal prosecutor, she has always loved historic Devlin’s Light, visiting as often as her busy schedule permits. But when her brother is found murdered on the steps of the lighthouse — the town’s namesake — she returns to uncover who killed Ry. When her brother’s good friend, Nick Enright, offers to help in her investigation, India accepts — after all, he’s the one who found Ry that night, and heard his mysterious last words.

As the list of suspects begins to narrow, India and Nick find themselves undeniably drawn to each other — a feeling India isn’t sure she is ready to admit. Soon a wonderful new emotion is glowing at Devlin’s Light — a sweet, irresistible, very mutual attraction — intensifying with each wave that crashes on the beach of the enchanting town by the bay….

A few years ago, I adored romantic suspense. I read every one in the subgenre. I don’t know when I fell off that bandwagon, but Stewart had a series that I loved. She’s a good author even if every book doesn’t work for me any more. At $1.99, I think you’d be satisfied.

→ Jane
Previous article: REVIEW: Duke of Midnight by Elizabeth Hoyt
Next Post: Wednesday News: Backing up Kindle books; Kobo promises a return to business as usual in 1-2 weeks; Bridget Jones’ latest book has a great first day; Pumpkin spice has no pumpkin in it