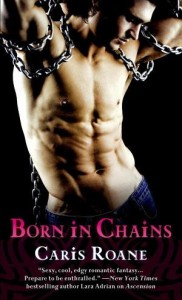 A VAMPIRE IN CHAINS.

Adrien is an Ancestral vampire, one of the strongest of his kind ever to exist. Scarred, tormented and extraordinarily powerful, he’s been imprisoned high in the Himalayan mountains…until a beautiful woman releases him from his chains and demands his help.

A WORLD IN DARKNESS.

Two years ago, Lily’s home was invaded by vampires who killed her family and kidnapped her son. Now she has one mission—to get him back. And the only man who can help her is a vampire whose strength has made him legendary. But can she ally herself a creature who frightens her…and ignites her darkest needs?

As Adrien ushers Lily into his hidden vampire world, he must show her that his kind can be trusted. But when saving her son requires her to unleash a weapon that will destroy his entire race, can he say the same for her?

Google has discounted a number of romances to $3.99 including new releases like Born in Chains by Caris Roane and The Wicked Deeds of Daniel Mackenzie by Jennifer Ashley. I bought Born in Chains a couple of weeks ago when it was released but used a coupon. Good thing or I might feel peeved right now as I haven’t read the darn thing yet.

I need to employ wish lists better and buy when I’m ready to read. 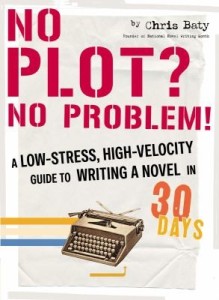 Chris Baty, motivator extraordinaire and instigator of a wildly successful writing revolution, spells out the secrets of writingand finishinga novel. Every fall, thousands of people sign up for National Novel Writing Month (NaNoWriMo), which Baty founded, determined to (a) write that novel or (b) finish that novel in—kid you not—30 days. Now Baty puts pen to paper himself to share the secrets of success. With week-specific overviews, pep “talks,” and essential survival tips for today’s word warriors, this results-oriented, quick-fix strategy is perfect for people who want to nurture their inner artist and then hit print! Anecdotes and success stories from NaNoWriMo winners will inspire writers from the heralding you-can-do-it trumpet blasts of day one to the champagne toasts of day thirty. Whether it’s a resource for those taking part in the official NaNo WriMo event, or a stand-alone handbook for writing to come, No Plot? No Problem! is the ultimate guide for would-be writers (or those with writer’s block) to cultivate their creative selves. 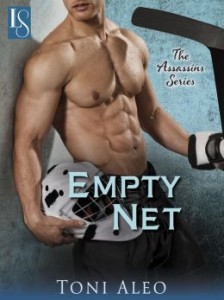 In Toni Aleo’s third novel in her hot Assassins series, the chiseled men of this Nashville hockey team can make anything happen when they go all out for the women they want—even turn a one-night stand into a happily ever after.

Audrey Parker is up against the boards. She’s stuck in a job she hates and pining for a total jerk. Meanwhile, her sister Fallon is moving out and getting married to hockey star Lucas Brooks. Where is Audrey’s Prince Charming? Nothing she does has ever seemed to be good enough for any of the men in her life. Audrey’s about to hit rock bottom . . . until she wakes up next to Tate Odder.

The thrill of moving up from the minors to the Nashville Assassins was a welcome distraction. But not even becoming the first rookie goalie to tally three shutouts in the Stanley Cup finals alleviates the pain. With the loss of his parents and sister weighing as heavily on his soul as ever, Tate Odder can’t keep pretending he’s okay. That’s when he meets smart, sexy Audrey. Her gentle warmth and quirky sense of humor make him feel whole for the first time in too long. But to stay that way forever, Tate must find a way to accept his past and learn to live for love. 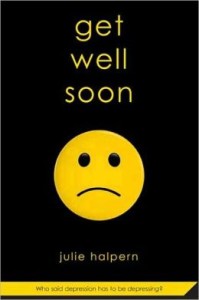 I got a better look at some of my fellow patients in this freak hole, and they all look pretty close to my age. They come up to the check-in desk to get pills. After they take them, the desk people look in their mouths to make sure they’ve swallowed. It’s like something out of The Twilight Zone. Are they going to do that to me?

Anna Bloom is depressed—so depressed that her parents have committed her to a mental hospital with a bunch of other messed-up teens. Here, she meets a roommate with a secret (and a plastic baby), a doctor who focuses way too much on her weight, and a cute, shy boy who just might like her. But wait! Being trapped in a loony bin isn’t supposed to be about making friends, losing weight, and having a crush, is it?

PW says “The talk about kissing and playing cards could make some forget they’re reading about time spent at the loony bin, as Anna sometimes calls it, but Halpern balances these sorts of discussions with Anna’s reactions to fellow patients who hear voices or claim to worship “the Dark Lord” and to rules forbidding all physical contact. As the novel progresses, readers will get a kick out of Anna’s snarky sense of humor and her capacity for self-renewal. “