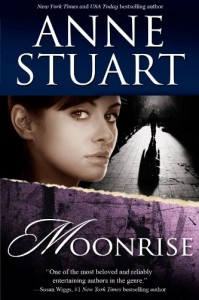 Annie Sutherland is fast finding out her life was built on lies. Haunted by her father’s death, Annie seeks out his protégé in the CIA, James McKinley, and is thrust into a secret shadow world that sends shivers of terror through her. For she finds James is no longer the conservative bureaucrat she remembers, but a mysterious, tortured fugitive—very armed and very dangerous. Annie and James are thrown together on a wild run that draws them closer to each other. Yet Annie is still not sure who James really is—a tender, passionate lover or a ruthless assassin? Who can she possibly trust with violence exploding all around her…and love perhaps the greatest snare of all…? 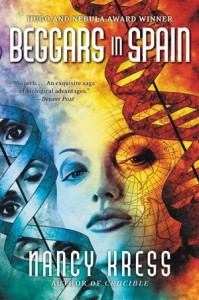 In a world where the slightest edge can mean the difference between success and failure, Leisha Camden is beautiful, extraordinarily intelligent … and one of an ever-growing number of human beings who have been genetically modified to never require sleep.

Once considered interesting anomalies, now Leisha and the other “Sleepless” are outcasts — victims of blind hatred, political repression, and shocking mob violence meant to drive them from human society … and, ultimately, from Earth itself.

But Leisha Camden has chosen to remain behind in a world that envies and fears her “gift” — a world marked for destruction in a devastating conspiracy of freedom … and revenge.

Leisha Camden, the product of genetic manipulation, is a genius and a misfit–she never sleeps, giving her a time advantage over the rest of the world. Resented by the world, the outcasts draw together for self-protection. Then the next, even stranger, generation of mutations comes along.

From PW: “Kress competently handles a well-worn science fiction concept and raises some intriguing scientific and sociological issues. Her dialogue sometimes lapses into stilted philosophical arguments, however, and many of her characters are thinly drawn” 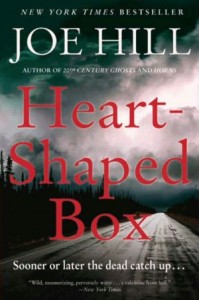 Judas Coyne is a collector of the macabre: a cookbook for cannibals . . . a used hangman’s noose . . . a snuff film. An aging death-metal rock god, his taste for the unnatural is as widely known to his legions of fans as the notorious excesses of his youth. But nothing he possesses is as unlikely or as dreadful as his latest discovery, an item for sale on the Internet, a thing so terribly strange, Jude can’t help but reach for his wallet.

I will “sell” my stepfather’s ghost to the highest bidder. . . .

For a thousand dollars, Jude will become the proud owner of a dead man’s suit, said to be haunted by a restless spirit. He isn’t afraid. He has spent a lifetime coping with ghosts—of an abusive father, of the lovers he callously abandoned, of the bandmates he betrayed. What’s one more?

But what UPS delivers to his door in a black heart-shaped box is no imaginary or metaphorical ghost, no benign conversation piece. It’s the real thing.

And suddenly the suit’s previous owner is everywhere: behind the bedroom door . . . seated in Jude’s restored vintage Mustang . . . standing outside his window . . . staring out from his widescreen TV. Waiting—with a gleaming razor blade on a chain dangling from one bony hand. . . .

A multiple-award winner for his short fiction, author Joe Hill immediately vaults into the top echelon of dark fantasists with a blood-chilling roller-coaster ride of a novel, a masterwork brimming with relentless thrills and acid terror.

From a verified purchaser at Amazon: “Heart-Shaped Box is definitely a fast paced, action packed ghost story…Frankly as the novel moves along it starts to read, at times, like a B grade horror movie, which for this reader was a bit of a turnoff. The later scenes get more and more sappy where Craddock started reminding me of Freddy Krueger from the movie Nightmare on Elm Street and the story really started getting rather campy. ” 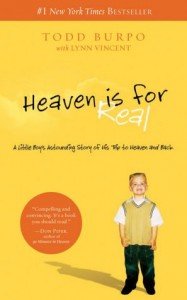 “Do you remember the hospital, Colton?” Sonja said.?“Yes, mommy, I remember,” he said. “That’s where the?angels sang to me.”

When Colton Burpo made it through an emergency appendectomy, his family?was overjoyed at his miraculous survival. What they weren’t expecting, though,?was the story that emerged in the months that followed—a story as beautiful as it?was extraordinary, detailing their little boy’s trip to heaven and back.

Colton, not yet four years old, told his parents he left his body during the?surgery–and authenticated that claim by describing exactly what his parents were?doing in another part of the hospital while he was being operated on. He talked of?visiting heaven and relayed stories told to him by people he met there whom he?had never met in life, sharing events that happened even before he was born. He also astonished his parents with descriptions and obscure details about heaven that?matched the Bible exactly, though he had not yet learned to read.

With disarming innocence and the plainspoken boldness of a child, Colton tells of meeting long-departed family members. He describes Jesus, the angels,?how “really, really big” God is, and how much God loves us. Retold by his father,?but using Colton’s uniquely simple words, Heaven Is for Real?offers a glimpse?of the world that awaits us, where as Colton says, “Nobody is old and nobody?wears glasses.”

Heaven Is for Real will forever change the way you think of eternity, offering?the chance to see, and believe, like a child.

This book has a huge number of positive reviews but delivers a highly Christian (and maybe fundamentalist Christian message). Reviews point out the parents’ belief that prayer cures; predictive end time battles; and the reaffirmation of a one true God. If those things are going to bother you, I would guess that even the most well crafted story would be problematic.

→ Jane
Previous article: REVIEW: Down to You by M. Leighton
Next Post: Wednesday News: Amazon targeted; Pay what you will; Build guns in your basement; Data driven romances.