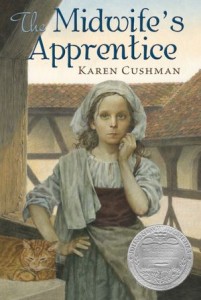 The Midwife’s Apprentice by Karen Cushman. $ 1.99

From the author of “Catherine, Called Birdy” comes another spellbinding novel set in medieval England. The girl known only as Brat has no family, no home, and no future until she meets Jane the Midwife and becomes her apprentice. As she helps the sharp-tempered Jane deliver babies, Brat-who renames herself Alyce-gains knowledge, confidence, and the courage to want something from life: “A full belly, a contented heart, and a place in this world.” Medieval village life makes a lively backdrop for the funny, poignant story of how Alyce gets what she wants. A concluding note discusses midwifery past and present. A Newbery Medal book.

Amazon is price matching Apple’s specials on Newberry winners. In order to get an ePub version at this price, you’ll have to buy from Apple. The featured Amazon review says ” Disappointingly, Cushman does not offer any hardships or internal wrestling to warrant Alyce’s final epiphanies, and one of the book’s climactic insights is when Alyce discovers that lo and behold she is actually pretty! Still, Cushman redeems her writing, as always, with historical accuracy, saucy dialogue, fast-paced action, and plucky, original characters that older readers will eagerly devour.” 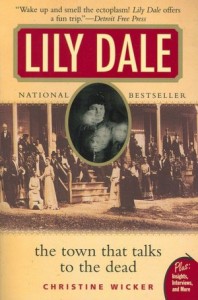 n Lily Dale, New York, the dead don’t die. Instead, they flit among the elms and stroll along the streets. According to spiritualists who have ruled this community for five generations, the spirits never go away—and they stay anything but quiet. Every summer twenty thousand guests come to consult the town’s mediums in hopes of communicating with dead relatives or catching a glimpse of the future. Weaving past with present, the living with the dead, award-winning journalist and bestselling author Christine Wicker investigates the longings for love and connection that draw visitors to “the Dale,” introducing us to a colorful cast of characters along the way—including such famous visitors as Susan B. Anthony, Harry Houdini, and Mae West. Laugh-out-loud funny at times, this honest portrayal shows us that ultimately it doesn’t matter what we believe; it is belief itself that can transform us all.

One of the reviews said that this is a fictionalization and not a true account of Christine Wicker’s forays into Lily Dale, a town that specializes in spiritualism. According to this review (http://www.amazon.com/review/R2USWE8Q32GJX3/ref=cm_cr_dp_title?ie=UTF8&ASIN=B001H1FZXS&nodeID=133140011&store=digital-text), the book exposes some of the tricks mediums use but also “Ms. Wicker does look at what the beliefs of the mediums are. And while I believe she is never totally convinced, she does have material to ponder, and she does question. I found that admirable. I also see where she re-examines her own beliefs, and comes away with some unexpected insights.” 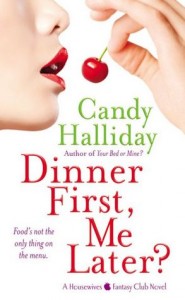 Every Saturday night, best friends and neighbors Zada, Jen, Tish, and Alicia heat up their quaint little cul-de-sac with the infamous Housewives Fantasy Club. Everyone has a secret fantasy to share. Some have better ones to hide.
Imagine! Retired baseball star Jake “The Rake” Sims living here—in the flesh! Well, he won’t find Alicia Greene an easy conquest (she does not do bad boys). So what if his chiseled pecs and grand slam physique—displayed nightly in sexy underwear commercials—once made him her “most valuable” fantasy lover. His wild lifestyle squelched that dream. Now Jake swears he’s reformed, Alicia’s not buying it, and their matchmaking neighbors are doing their best to foil the couple’s “good” intentions. They may be on to something. After one fabulous dinner, Jake takes Alicia in his arms and discovers how forbidden passion—more tempting and sweeter than dessert—can fulfill all her secret fantasies.

I hate this title with the heat of a thousand suns. I reviewed this book because it featured an athlete hero. Meh “Alicia Greene grew up in Chicago and formed an unhealthy attachment to a baseball star by the name of Jake “The Rake” Sims. Early on in his career, he had an interview with Barbara Walters wherein he dashed Alicia’s crush to shreds by coming off as a macho jerk. Fast forward several years and Alicia finds herself living across the street from her former dream man. Determined not to be a number on his bedpost, Alicia immediately declares her disinterest. However, when Jake acts disinterested in return, Alicia is spurred to lure him in. ”

Now that I re-read the blurb and look at the cover I wonder how I could have missed the obvious Witches of Eastwick reference? Probably because there was nothing in the book about it? 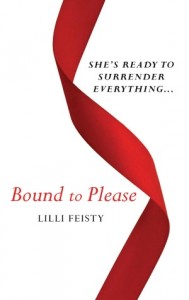 FROM FANTASY TO ECSTASY

Ruby Scott is a beautiful, quiet event planner who leads an oh-so-respectable life. Yet the things that go on in her secret fantasies are anything but. She has every intention of keeping her hidden desires under wraps-until she meets a gorgeous, hard-muscled man ten years her junior. Mark St. Crow is a gifted, up-and-coming musician who collects erotic art and loves to “play” women as much as his piano. After one night of uninhibited passion, Ruby realizes there’s no turning back. But as she surrenders to her deepest needs and lets Mark control every forbidden thrill, her passion for him builds. Can the wild, intoxicating nights they share lead to a love that will last forever?

I reviewed this one as well

(This has gotten a cover redo since 50 Shades)

I believe that Ruby was intended to be portrayed as a strong character who is torn between wanting something exciting and wanting something secure. The greatest problem I had with Ruby was that she came off more like a young twenty something than a thirty-seven year old. She seemed to lack security in herself as a woman, her knowledge of her own sexuality, her reaction to men. I wondered if she engaged in any introspection prior to showing up on stage, so to speak, in the pages of the book because she seemed to lack any self awareness. Contrast this with Mark.

Mark, the younger of the two, has far more personal recognition of himself as an artist, a sexual being, and as a man. His problem? Fidelity, frankly.