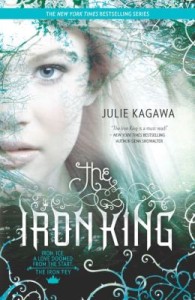 This is a well received series of books. I’ve always meant to read them but never have. Maybe this is a sign? 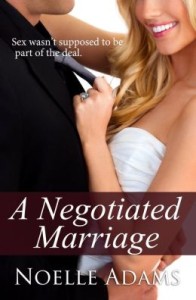 A Negotiated Marriage by Noelle Adams. $ .99

Sex wasn’t supposed to be part of the deal.

Three years into a marriage of convenience, Molly’s high-powered CEO husband wants to add a new term to their marriage agreement. Sex–without any messy emotional entanglements. But weekly sex with Luke, despite their carefully negotiated terms, is likely to get messy eventually.

Content in a mutually beneficial arrangement, Molly isn’t going to fall for Luke the way she fell for an old lover, only to be crushed in the end. She vows to stay strong, no matter how much intimacy develops between them in bed. When her old lover returns, finally wanting a real relationship, Molly has the chance to give her heart to a man who will accept it.

It’s too bad she now wants to give it to her husband, who has never admitted her heart is what he wants.

This is the same author who wrote Escorted. It’s a nice little contemporary that features an already established couple realizing that they are in love with each other. It’s kind of like a Helen Bianchin novel only with a more modern feeling and slightly less angst (and shorter) 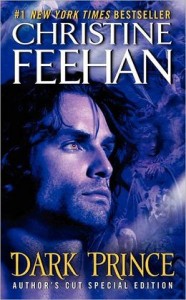 Enter the enchanting world of the Carpathians, where dark adventure, mystery, and love await, and the desires of two daring hearts unite in one irresistible passion

A telepathic hunter of serial killers, Raven Whitney’s work has drained her body and spirit, and now, in need of rest and rejuvenation, she embarks on a vacation far from home.

The powerful leader of the Carpathians—a wise and secret ancient race that thrives in the night—Mikhail Dubrinsky is engulfed by despair, fearful of never finding the mate who can save him from the encroaching darkness.

From the moment they meet, Raven and Mikhail are helpless to resist the desire that sparks between them. But just as fate unexpectedly brings these life mates together, malevolent forces threaten to destroy them and their fragile love.

With an additional 100 pages of new material, Christine Feehan’s magnificent tale of forbidden love mesmerizes as never before. Experience Dark Prince as it was always meant to be!

I cut my teeth on the paranormal romance genre with Christine Feehan. This is the first book in her Carpathian series. If you read it and think, “hey, X author did this before”, likely you’d be wrong. This book was originally published in 1999 and Feehan started the soul mate trend, the vampires that didn’t see color or would go insane without their mates.

I’m tempted to buy and re-read to see if I enjoyed it as much as I did when I first read it. 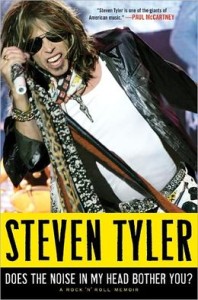 “I’ve been mythicized, Mick-icized, eulogized and fooligized, I’ve been Cole-Portered and farmer’s-daughtered, I’ve been Led Zepped and 12-stepped. I’m a rhyming fool and so cool that me, Fritz the Cat, and Mohair Sam are the baddest cats that am. I have so many outrageous stories, too many, and I’m gonna tell ’em all. All the unexpurgated, brain-jangling tales of debauchery, sex & drugs, transcendence & chemical dependence you will ever want to hear.”

The son of a classical pianist straight out of the Bronx of old Archie comics, Steven Tyler was born to be a rock star. Weaned on Cole Porter, Nat King Cole, Mick—and his beloved Janis Joplin—Tyler began tearing up the streets and the stage as a teenager before finally meeting his “mutant twin” and legendary partner Joe Perry. In this addictively readable memoir, told in the playful, poetic voice that is uniquely his own, Tyler unabashedly recounts the meteoric rise, fall, and rise of Aerosmith over the last three decades and riffs on the music that gives it all meaning.

Tyler tells what it’s like to be a living legend and the frontman of one of the world’s most revered and infamous bands—the debauchery, the money, the notoriety, the fights, the motels and hotels, the elevators, limos, buses and jets, the rehab. He reveals the spiritual side that “gets lost behind the stereotype of the Sex Guy, the Drug Guy, the Demon of Screamin’, the Terror of the Tropicana.” And he talks about his epic romantic life and his relationship with his four children. As dazzling, bold, and out-on-the-edge as the man himself, Does the Noise in My Head Bother You? is an all-access backstage pass into this extraordinary showman’s life.

I read two Rock Star memoirs last year and they were both really engaging. There’s no question that Stephen Tyler’s book has to have some interesting hijinks in it.