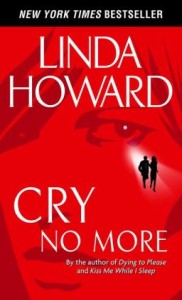 Fueled by an obsession to fill the void in other people’s lives, Milla Edge finds lost children—all the while trying to outrun the brutal emotions stemming from a tragedy in her past. Traveling to a small village in Mexico on a reliable tip, Milla begins to uncover the dire fate of countless children who have disappeared in the labyrinth of a sinister baby-smuggling ring. The key to nailing down the organization may rest with an elusive one-eyed man. As Milla’s search for him intensifies, the mission becomes more treacherous. For the ring is part of something far larger and more dangerous, reaching the highest echelons of power. Racing into peril, Milla suddenly finds herself the hunted—in the crosshairs of an invisible, lethal assassin who aims to silence her permanently.

This is on the top of many readers’ ugly cry lists. 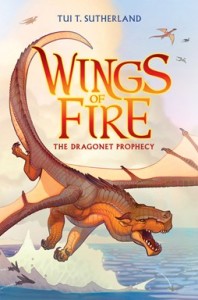 Wings of Fire, Book One: The Dragonet Prophecy by Tui T. Sutherland. $ 2.99

A thrilling new series soars above the competition and redefines middle-grade fantasy fiction for a new generation! The seven dragon tribes have been at war for generations, locked in an endless battle over an ancient, lost treasure. A secret movement called the Talons of Peace is determined to bring an end to the fighting, with the help of a prophecy — a foretelling that calls for great sacrifice. Five dragonets are collected to fulfill the prophecy, raised in a hidden cave and enlisted, against their will, to end the terrible war. But not every dragonet wants a destiny. And when the select five escape their underground captors to look for their original homes, what has been unleashed on the dragon world may be far more than the revolutionary planners intended . . .

My daughter absolutely loves these books. She has looked up the next one on Amazon and is counting down the days until the next one is released in hardcover. (Yes, I have to buy the hardcover so that all the books in the series match). She’ll stop during her reading of the book to read her favorite passages to me and at one time made an excited and shocked noise during reading. Love hearing that. 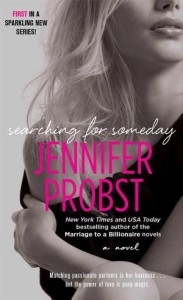 Searching for Someday by Jennifer Probst . $ 2.99

First in a sizzling new series from Jennifer Probst, the USA Today bestselling author adored for her “fresh, fun, and sexy” (Romancing the Book) storytelling!

In charming Verily, New York, Kate Seymour has a smashing success with Kinnections, the matchmaking service she owns with her two best girlfriends. But Kate’s more than a savvy businesswoman: She’s gifted with a secret power, a jolting touch that signals when love’s magic is at work. It rocked her when she picked up a strange volume of love spells in the town’s used bookstore . . . and it zapped her again when she encountered Slade Montgomery, the hot-tempered— and hot-bodied—divorce lawyer who storms into Kinnections demanding proof that playing Cupid won’t destroy his vulnerable sister, Kate’s newest client. The only way to convince this cynic that she’s no fraud, and that love is no mirage, is for Kate to meet his audacious challenge: find him his dream woman. Can Kate keep their relationship strictly business when her electrifying attraction nearly knocked her off her feet? Or has the matchmaker finally met her match?

The secret power for matchmaking is a story I’ve read before – in a mystery/romance series. Help me out readers! I liked it too although obviously not enough that I can remember the title or the author. We’ll blame old age and not the book. 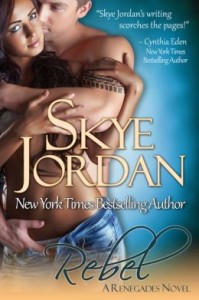 Sassy, smart, and sexy, former supermodel-turned-tech guru Rubi Russo has it all—looks, money, confidence and freedom. Her life is a whirlwind of fast cars and fleeting affairs—and she likes it that way. With a past like Rubi’s, forever isn’t part of her vocabulary. So when studly Renegade stuntman Wes Lawson wants to take their friendship to the next level, she’s all out.

Raised a simple country-boy, Wes knows the brazen Rubi isn’t his type. But after spending time with her, he discovers she’s everything he’s ever wanted in a woman. To win her wild rebel heart, he’ll have to prove he sees behind her smokescreen to all the goodness she tries to hide. Then it’s just a matter of crushing her fears, shattering her barriers, and convincing her that loving him is everything she’s been missing in her life, too.

I liked the first one in this series which I read before I learned that the author was Joan Swan who wrote Fever (review) but I’m willing to take a chance on the second book when it is free.