Two great deals at Amazon include:

Kobo Coupons. These coupons all worked this morning with coupon eligible books.  The larger coupon codes are generally one use: 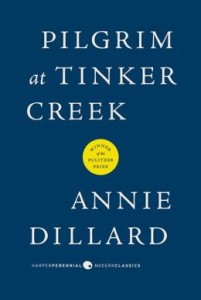 Pilgrim at Tinker Creek is the story of a dramatic year in Virginia’s Blue Ridge valley. Annie Dillard sets out to see what she can see. What she sees are astonishing incidents of “mystery, death, beauty, violence.”

A personal narrative of one year spent exploring the natural wonders, curiosities, frights and revelations experienced by naturalist Annie Dillard in her own backyard.

I’m building my Pulitzer Prize novel library one $1.99 deal at a time. How about you? One of the reviewers said “Ask a 5th grader for their opinion of what it’s like to be a tree and you will get the same imagery in less time without the pretentiousness.” 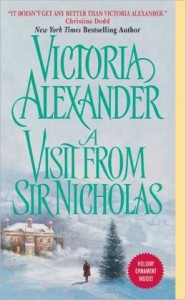 A Visit from Sir Nicholas by Victoria Alexander. $ 1.99

Everyone knows that an Effington always getsher way … but this time it’s not going to be easy!

Lady Elizabeth Effington simply could not suitably feel the joy of the Christmas season. Ten years had passed since she had boldly declared her love for Sir Nicholas Collingsworth. He rebuffed her and set out to seek his fortunes, while Elizabeth was left a woman scorned. Now, she discovers in horror that the inheritance she’s managed beautifully was never hers to control. No, power over her finances lay in the hands of the last man she ever wants to see again: Nicholas!

But running Elizabeth’s life isn’t part of Nick’s plans. He’s intrigued when he discovers that the frivolous and flighty girl he once knew has turned into a beautiful and capable woman. Nick vows to woo — and win — her, and while she seems unmoved by his fervent seduction, he swears he will not rest until she accepts that most precious gift of all — the gift of love.

On facebook the other day, Sara Thorn asked for some holiday book recommendations. She’s read all the Balogh’s. Avon has some of its Christmas historicals on sale. This title has been on sale before. Also on sale is Leica Cornwall’s All The Pleasures of the Season for $1.99. 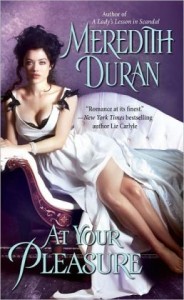 A new and evocative Regency historical novel from rising star Meredith Duran, an author for whom, as Fresh Fiction said, “readers need to make room on their keeper shelf.”

By candlelight, she lures him…

Glittering court socialites and underworld cutpurses alike know that Adrian Ferrers, Earl of Rivenham, is the most dangerous man in London. Rivenham will let nothing—not the deepening shadow of war, nor the growing darkness within him—interfere with his ambition to restore his family to its former glory. But when tasked by the king to uncover a traitor, he discovers instead a conspiracy—and a woman whose courage awakens terrible temptations. To save her is to risk everything. To love her might cost his life.

At swordpoint she defies him…

Lady Leonora knows that Rivenham is the devil in beautiful disguise—and that the irresistible tension between them is as unpredictable as the dilemma in which Nora finds herself: held hostage on her own estate by Rivenham and the king’s men. But when war breaks out, Nora has no choice but to place her trust in her dearest enemy—and pray that love does not become the weapon that destroys them both…

Duran is a fantastic writer. I admit that I haven’t read this one yet but I suspect it is very good. 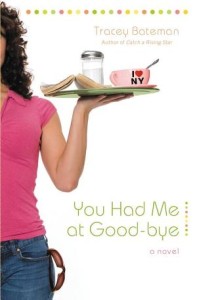 Everything is on the line for aspiring editorial diva Dancy Ames when she’s fired by her publisher. Could this be the time to risk it all on her writing career–and maybe even love?

Dancy Ames has an enemy: Jack Quinn. The man who swoops in, steals her dream job at Lane Publishing, and fires her, saying she just doesn’t have what it takes to be an editor. Now that she’s unemployed, Dancy must find a new career. Coffee barista, English teacher, literary agent. Hmm. Maybe she’ll write a novel–a nasty invective, featuring a relentless job-stealing, coffee-drinking stalker who falls in love with a coffee barista. She’s got time on her hands, so when her friends dare her to send Jack a proposal, under an assumed name, she takes them up on it. If he likes it, she’ll have her ultimate revenge. But what will she do when it turns out that Jack is interested in her book–and maybe more?

At first I thought the author’s name was an actress but I was thinking of Justine Bateman. This is the second in a series called “Drama Queen”. I dunno if Drama Queen as a series title is a real selling point. And, apparently, this is a religious book because the message is “if you trust in God he’ll always show you the way.”