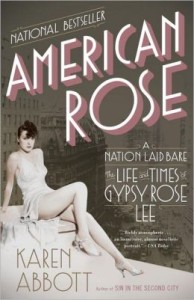 With the critically acclaimed Sin in the Second City, bestselling author Karen Abbott “pioneered sizzle history” (USA Today). Now she returns with the gripping and expansive story of America’s coming-of-age—told through the extraordinary life of Gypsy Rose Lee and the world she survived and conquered.

America in the Roaring Twenties. Vaudeville was king. Talking pictures were only a distant flicker. Speakeasies beckoned beyond dimly lit doorways; money flowed fast and free. But then, almost overnight, the Great Depression leveled everything. When the dust settled, Americans were primed for a star who could distract them from grim reality and excite them in new, unexpected ways. Enter Gypsy Rose Lee, a strutting, bawdy, erudite stripper who possessed a preternatural gift for delivering exactly what America needed.

With her superb narrative skills and eye for compelling detail, Karen Abbott brings to vivid life an era of ambition, glamour, struggle, and survival. Using exclusive interviews and never-before-published material, she vividly delves into Gypsy’s world, including her intensely dramatic triangle relationship with her sister, actress June Havoc, and their formidable mother, Rose, a petite but ferocious woman who seduced men and women alike and literally killed to get her daughters on the stage.

American Rose chronicles their story, as well as the story of the four scrappy and savvy showbiz brothers from New York City who would pave the way for Gypsy Rose Lee’s brand of burlesque. Modeling their shows after the glitzy, daring reviews staged in the theaters of Paris, the Minsky brothers relied on grit, determination, and a few tricks that fell just outside the law—and they would shape, and ultimately transform, the landscape of American entertainment.

With a supporting cast of such Jazz- and Depression-era heavyweights as Lucky Luciano, Harry Houdini, FDR, and Fanny Brice, Karen Abbott weaves a rich narrative of a woman who defied all odds to become a legend—and whose sensational tale of tragedy and triumph embodies the American Dream.

This book seemed neat. I almost think I might have profiled it before but I couldn’t find it in a quick search.  Many reviews complained about how the story was ordered. It jumps back and forth and uses several different names to refer to Gypsy Rose Lee which could lead to confusion to those unfamiliar with her and those who are familiar might think the treatment too shallow. 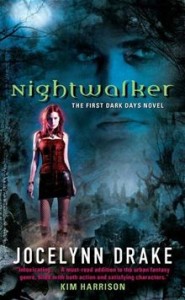 For centuries Mira has been a nightwalker–an unstoppable enforcer for a mysterious organization that manipulates earth-shaking events from the darkest shadows. But elemental mastery over fire sets her apart from others of her night-prowling breed . . . and may be all that prevents her doom.

The foe she now faces is human: the vampire hunter called Danaus, who has already destroyed so many undead. For Mira, the time has come to hunt . . . or be hunted.

Nightwalker was reviewed by Jia and given a C+.

The interesting worldbuilding is one of the reasons why the actual plot disappointed me a little. We have yet another kickbutt heroine surrounded mostly by men, many of whom adore her, hate her, or both love and hate her at the same time. I think this is rapidly becoming one of the genre’s conventions I would gladly do without. What’s wrong with a little more female presence? For that matter, what’s wrong with a little more female presence that’s not considered antagonistic to the lead heroine’s role? I refuse to believe it’s impossible for an urban fantasy heroine to be friends with another woman, but books in which this is the case seem to be the exception rather than the rule. 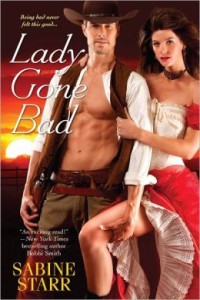 The saloon singer known as Lady Gone Bad is the most drop-dead gorgeous outlaw the West has ever seen. Lady has never met a cowboy she couldn’t entice, or a lawman she couldn’t outrun. But when Lady tangles with a sexy U.S. Marshall, she’s tempted to stick around long enough to watch him lay down the law–in her bed.

U. S. Marshall Rafe Morgan wants to lock up Lady Gone Bad for good–and he won’t let his attraction to her slow him down. But when his attempt to bring Lady to justice goes awry, Rafe is nearly hanged–and by dawn, his face is plastered next to hers on every “Wanted” poster in Texas.

Now on the run together, Rafe and Lady find themselves in very close quarters–and even more compromising positions. As Lady surrenders to Rafe’s touch, she slowly begins to reveal all her secrets–including her real name. Maybe Lady Gone Bad isn’t beyond redemption after all. Either way, Rafe is in for one wild ride. . .

So when I was trying to get the Kobo link for this deal, Kobo wanted to sell me something from “bundles of joy.” I kid you not.

Lynn Spencer from AAR said this “I like a good Western and I enjoy discovering good, new-to-me authors, so I thought I’d give Lady Gone Bad a try. From the plot and the back cover blurb, one gets the impression that it’s supposed to be an action-packed road romance. Reality falls short somewhat, though, as vague plotting and haphazard characterizations drag this story down.“ 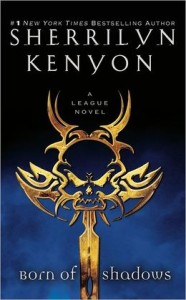 In a world where the League and its assassins rule, where betrayal and treachery are everywhere . . . the only survivors are those ones who are . . .

For Caillen Dagan, a defiant soldier of fortune, survival isn’t a right, it’s a brutal daily battle. Moving through the Ichidaian universe like a wraith, his brushes with the law and death are legendary. But when an act of rare heroism reveals his hidden birthright, he’s forced into a world much more dangerous and cold-hearted than the bloody streets where he was raised-one of obscene wealth and lethal politics.

Ferocious and determined, Desideria serves as an official bodyguard for her queen. Born of questionable genetics, she will do anything to prove herself worthy of the weapons she carries and the position she’s won by combat. But when she uncovers a ruthless plot to assassinate the queen and overthrow her country’s government, Desideria is caught in the crosshairs.

With assassination contracts out on both of them, Caillen and Desideria must learn to fight together or die alone. And if they fail, their governments will fall into the hands of an unimaginable evil.

This is book 4 in the series and from reviews it might be a bad place to start (but you could buy now and wait to see if others go on sale).

→ Jane
Previous article: REVIEW: The Great Escape by Susan Elizabeth Phillips
Next Post: What traditional publishers are doing with digital first for readers