Daily Deals: Illustrated children’s books for $2.99 and under (with a couple of freebie romances) 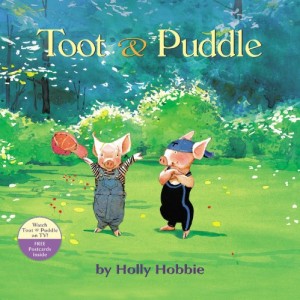 Meet Toot and Puddle–two small, endearing pigs who are friends and as different as different can be. While Toot likes to travel to places unknown, Puddle prefers to stay home and revel in the joys of everyday life. Whimsical postcards capture the excitement of Toot’s travels, while scenes of Puddle celebrate mundane moments spent in familiar confines. Full color.

Toot & Puddle is an adorable book that tells kids that traveling to other places and experiencing unfamiliar things is to be celebrated. The book was turned into a television show that we watched on occasion when the tot was younger.

You can buy a paperback version from a secondary seller for about the same price.

Apple is discounting illustrated children’s books this week and Amazon, of course, has price matched. You will want to have a color device to enjoy these titles. Don’t worry, though, I’ve got a few romance freebies at the bottom. 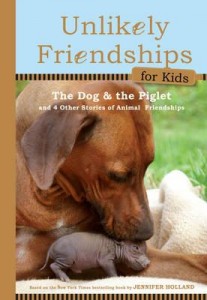 Unlikely Friendships for Kids: The Dog & the Piglet: And Four Other Stories of Animal Friendships by Jennifer S Holland. $ 2.99

Unlikely Friendships is a phenomenon. A book with its compelling message of hope and friendship and differences overcome. Temple Grandin called it “. . . amazing. It shows the power of friendship.”

Now Unlikely Friendships is rewritten for younger readers: Unlikely Friendships for Kids, a series of hardcover chapter books for children, ages seven and up. Here are three collections each with five of the clearest, most interesting stories from the original book, like the monkey and the dove or the leopard and the cow. Chapter books give young readers a strong sense of accomplishment, and these heartwarming animal stories, with their incredible photographs and inexplicable mysteries of attraction, their focus on friendship, love, and the ways that creatures of all different species can find common bonds of affection, will keep kids turning the pages to find out about the unusual ways animals help each other and discover the love of new friends.

Each is a perfect gift for young animal lovers, and a lovely subject to help kids get reading.

As the blurb says, this is a series of chapter books containing full color photographs of the different unusual animal friendships; their story and a few facts about the animals in the pictures. 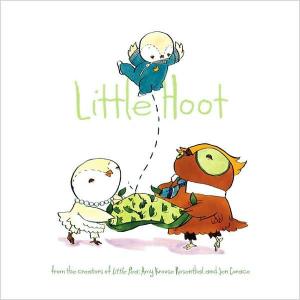 It’s not fair! All Little Owl wants is to go to bed at a reasonable hour, like his friends do. But no . . . Mama and Papa say little owls have to stay up late and play. So Little Owl spends all night jumping on his bed, playing on the jungle gym, and doing tricks on his skateboard–but he’s hooting mad about it ! Children who have a hard time going to bed will love this fun twist on the universal dilemma.

This is a gorgeously illustrated book with dozens of small details. As a parent, you can enjoy finding new things with every repeated reading. It is a perfect story to put into your bedtime rotation because it, of course, encourages your child to go to sleep.

The illustrator is Jen Corace. 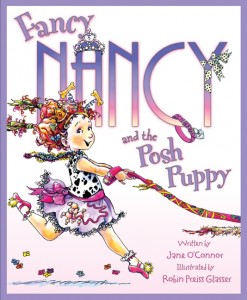 Fancy Nancy is back! And when her family decides to get a dog, she’s certain she can be fancier than ever. After all, a papillon—a small, delicate, fluffy dog—is the ultimate accessory. But her family wants a large, plain dog. How unglamorous!

With Fancy Nancy’s trademark humor and warmth, Nancy discovers that real fanciness does not depend simply on appearance but more on a genuine joie de vivre, which is a fancy phrase for having lots of fun.

My daughter didn’t find the Fancy Nancy series very compelling but I thought they were cute. I loved looking at the adorable and fancy getups that Nancy wore but Nancy’s appeal to parents also resides in the Nancy’s expansive vocabulary. She’s fancy, not only for her dress, but her use of words not ordinarily familiar to children. 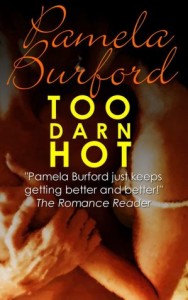 Rule Number One: Never mix business with pleasure. New York restaurant reviewer Lina Holland learned that lesson by watching her beloved mentor self-destruct, and she’s not about to make a similar mistake, even if the chef and owner of the restaurant she’s secretly reviewing is the most sexalicious hunk who ever seared a T-bone. It’s not enough to be scrupulously impartial, she must avoid even the merest whiff of favoritism. Date a restaurateur? She can’t allow herself to even think about it. Okay, she thinks about it, but that’s all. Really!

Chef Eric Reid is a widower struggling to raise twin boys and keep his fledgling Long Island restaurant afloat long enough for word of mouth to lift it out of the red. Little does he suspect that the intriguing new customer groaning in ecstasy over his bourbon pecan tart is none other than the legendary Lina Holland, the reviewer whose thumbs-up could spell the difference between colossal success and the extermination of his lifelong dream. No one in the industry knows what Lina looks like, but he’s convinced she’s a brash, zaftig shrew who applies her makeup with a putty knife. When he finds out how wrong he is, the fun really starts!

Throw in a buttinsky roommate, a lecherous ex-husband, bribery by chocolate, and the fishing excursion from hell, and the result is, well, too darn hot!

I can’t remember ever reading Burford. The reviews on this book are pretty mixed. The most helpful review says that the characters are infuriating behaving like hormonal teenagers and never actually talking to each other.

She lives for danger. A beautiful Pinkerton agent, Jewel Flannery disguises her identity to hunt down outlaws. And she always gets her man.

He lives for passion. A magnetically handsome riverboat gambler, Bret Conners can have any woman he wants. Except the one “jewel” he desires most of all.

When Bret spies the secret fire burning behind Jewel’s disguise, both he and Jewel are searching for robbers. But what they find is a treasure more precious than gold, more savage and reckless than their stolen kiss, and it poses the greatest danger of all.

Originally published as Gypsy Jewel by Sands Publishing LLC in 2001. It was a nominee for best historical romantic suspense by the Romantic Times. A female Pinkerton agent? Kind of awesome.

One review said the book was predictable and another said that it had unusual characters for a historical romance. Someone get the book for free and let us know who is right!