Daily Deals: Historical, short stories, and a YA told from a boy’s POV

When Craig accompanies his supervisor Martin to the Midwest on a business trip scouting big yellow trucks, he doesn’t expect much–the roadside diners and strange currency seem straight out of an old black-and-white movie–but their visit to Martin’s former classmate shows Craig a side of Normal he never anticipated. It’s full of foam fingers and old movie theaters, not-so-good beer and vintage cars with fins, and most of all an attractive woman and her pet-project old-time theater. What Craig finds is that Normal is more intriguing than he’d imagined.

“What all of these tales have in common is masterfully crafted prose, dry but sympathetic observation, and an engrossing allusion to a larger, unseen world.” -Sydney Morning Herald on “Welcome to Normal”

It was such a struggle to find deals this morning that weren’t just at Amazon. This is a collection of short stories and like many collections, some are great and some are just okay per the reviewers.

It was originally published by Random House Australia and looks to be self published in the US or territories beyond Australia. 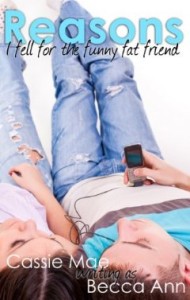 It’s stupid to fall for your brother’s ex. It’s even worse to enlist another’s help to win the ex over. But Brody is desperate and Hayley, his partner in American Sign Language, is more than willing to lend him a few tips. She’s the school’s ‘matchmaker’, and with her bizarre and positive personality, Brody finds her easy to talk too, even about the most awkward situations. Hayley’s tips seem to be working, but as Brody learns more about his matchmaker, he starts finding reasons to spend time with her, and not the girl he thought he was in love with.

But Hayley isn’t ready to fall for anyone. Labeled the “Funny Fat Friend” within her group, her self image makes it impossible for Brody to share his feelings without Hayley shrugging it off as a joke.

Convincing her Brody can, and did, fall for the “Funny Fat Friend” turns out to be a lot harder than simply falling in love.

This sale price is available at Amazon. I think the book is self published although I’m not sure. I read the negative reviews and they didn’t deter me from buying the book. It’s told entirely from the teen boy’s POV and I had great success with “Something Like Normal” by Trish Doller.

The negative reviews called Brody too perfect (one of them said he was Bella Swan) and dumb and boring. Another reviewer didn’t like that Hayley used the word “fart” as a curse word.

The positive reviews said that the book was cute and sweet. Maybe you might be better off reading DUFF by Kody Keplinger but that book isn’t $1.23. 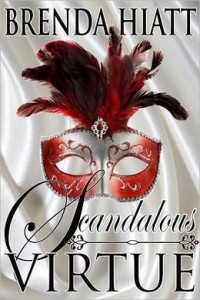 First impressions can be most deceiving!

Under the tutelage of her strict father, then that of an equally strict husband twice her age, Nessa, Lady Haughton, has been trained all her life to be a model of English propriety and virtue. But beneath the inexperienced young widow’s oh-so-prim exterior, she craves a taste of the wickedness she has always been denied. Now that she is finally free, she intends to satisfy that craving!

Notorious rakehell and war hero Jack Ashecroft finds himself unexpectedly elevated to Marquis of Foxhaven. But to claim the fortune that goes with the title, Jack must renounce his wild ways and establish himself as a respectable member of Society. The surest, quickest path, he is certain, will be to find and wed a woman beyond reproach—if one will have him.

When Jack and Nessa meet, each thinks the other is exactly the ticket to the changes they are seeking. Sparks will fly when they discover each other’s true goals—especially if it’s already too late to turn back!

This book was originally published by HarperCollins in 1999. The plot sounds pretty standard (but maybe in 1999 it was innovative). The few reviews seem to point to a decent historical read. 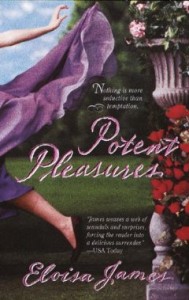 Eloisa James breathes new life into one of the most popular fiction genres with her highly original debut novel Potent Pleasures, a charming, vividly peopled Regency romance. With an uncanny wit and an eye for the whimsical, she unravels a complex–and often hilarious–chain of events inadvertently set in motion by a young woman’s first taste of forbidden pleasure.

About to make her debut in London society, Charlotte Calverstill, beneath the lavish gowns and manners of a well-brought-up young lady, yearns for a taste of freedom. Pushing propriety aside, one evening she sneaks out with a friend to attend a masked ball, and there meets a devastatingly handsome stranger who relieves her–not against her wishes–of her virtue, then vanishes.

Years later, when they meet again, the rogue does not remember Charlotte. But she certainly remembers him; she has since learned not only his identity, but also a titillating piece of gossip about him that is sure to set society abuzz. The intricate web that a now-wiser Charlotte weaves to exact her due ensures justice for some and great merriment for all.

BONUS: This edition contains an excerpt from Eloisa James’s Paris in Love.

If I recall correctly, these are some of the earliest James books and have some really obvious historical inaccuracies. When she was first published, much was made of her Ivy league education and history Ph.D. and this made her an easy target for those who enjoy accurate historical detail. 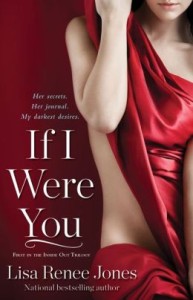 He is rich and famous, and dark in ways I shouldn’t find intriguing but I do. I so do. I don’t understand why his dark side appeals to me, but the attraction between us is rich with velvety promises of satisfaction. . . .

In the bestselling style of Fifty Shades of Grey, Lisa Renee Jones delivers sexy thrills and heart-pounding sensuality with a tantalizing page-turner in which the eyes of a high school English teacher are opened to a world she never knew existed, and she finds a passionate craving within that she never knew she possessed.

The journal comes to Sara McMillan by chance, when she inherits the key to an abandoned storage locker belonging to a woman named Rebecca. Sara can’t resist peeking at the entries in the journal . . . and she finds a scintillating account of Rebecca’s affair with an unnamed lover, a relationship drenched in ecstasy and wrapped in dark secrets.

Next in this thrilling new trilogy: look for Being Me and Revealing Us.

I forgot to include this deal on Saturday and Sunday even though I promised the author I would. I really do appreciate when people give me the heads up about deals. It’s only on sale at Amazon right now. I think it was part of the big BN blow out. So I apologize to the readers and the author for being tardy.

This book is one that was originally self published and then crept into the Kindle top 100 and snagged the attention of Simon & Schuster. It is billed as Storage Wars + Basic Instinct + 50 Shades. Ends in a cliffhanger.

→ Jane
Previous article: REVIEW: Wolf With Benefits by Shelly Laurentson
Next Post: Tuesday News: Scott Turow given platform at NYT to get his hate on and Amazon insider writes ebook about Amazon