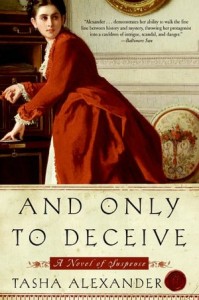 And Only to Deceive

For Emily, accepting the proposal of Philip, the Viscount Ashton, was an easy way to escape her overbearing mother, who was set on a grand society match. So when Emily’s dashing husband died on safari soon after their wedding, she felt little grief. After all, she barely knew him. Now, nearly two years later, she discovers that Philip was a far different man from the one she had married so cavalierly. His journals reveal him to have been a gentleman scholar and antiquities collector who, to her surprise, was deeply in love with his wife. Emily becomes fascinated with this new image of her dead husband and she immerses herself in all things ancient and begins to study Greek.

Emily’s intellectual pursuits and her desire to learn more about Philip take her to the quiet corridors of the British Museum, one of her husband’s favorite places. There, amid priceless ancient statues, she uncovers a dark, dangerous secret involving stolen artifacts from the Greco-Roman galleries. And to complicate matters, she’s juggling two very prominent and wealthy suitors, one of whose intentions may go beyond the marrying kind. As she sets out to solve the crime, her search leads to more surprises about Philip and causes her to question the role in Victorian society to which she, as a woman, is relegated.

This is a much loved Victorian England set mystery series. And Only To Deceive is the first title. The third title, A Fatal Waltz 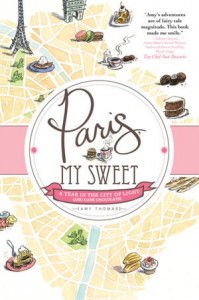 Forever a girl obsessed with all things French, sweet freak Amy Thomas landed a gig as rich as the purest dark chocolate: leave Manhattan for Paris to write ad copy for Louis Vuitton. Working on the Champs-Élysées, strolling the charming streets, and exploring the best patisseries and boulangeries, Amy marveled at the magnificence of the City of Light.

But does falling in love with one city mean turning your back on another? As much as Amy adored Paris, there was part of her that felt like a humble chocolate chip cookie in a sea of pristine macarons. PARIS, MY SWEET explores how the search for happiness can be as fleeting as a salted caramel souffle’s rise, as intensely satisfying as molten chocolate cake, and about how the life you’re meant to live doesn’t always taste like the one you envisioned.

Readers here have loved Laura Florand’s books about her French chocolatiers so I wondered if Jayne would be interested in this title. It’s a non fiction title about an ad executive who goes to Paris while working the Louis Vuitton account. “Thankfully, her vivid descriptions of baguettes, macaroons, and baba au rhum do more than merely tempt-supplemented with an extensive list of Thomas’ favorite bakeries in Paris and New York, readers can get their own taste of two cities, though Thomas’ is the tale to beat.” says PW 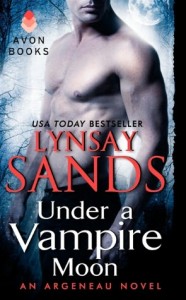 Under a Vampire Moon: An Argeneau Novel by Lynsay Sands. $ 1.99

This is the 16th! entry in Sands’ bestselling Argeneau series. The PW review makes this book sound pretty funny. The heroine is a middle aged ad exec escaping an abusive marriage. On vacation she meets Christian Notte who believes she might be his mate. Because of Carolyn’s relationship skittishness, Christian pretends he is gay and enlists Carolyn as his beard. It made me think of this video about gay men marrying straight guy’s girlfriends if they don’t support gay marriage. 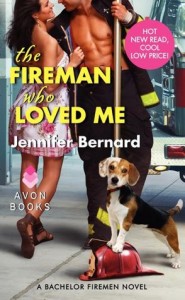 The Fireman Who Loved Me: A Bachelor Firemen Novel by Jennifer Bernard. $ .99.

Fearless, smoking hot, and single: meet the Bachelor Firemen of San Gabriel. These firemen might be heroes, but it’s their bad luck in love that makes them legendary.

News producer Melissa McGuire and Fire Captain Harry Brody couldn’t be more different, though they do have one thing in common: they’re both convinced they’re perfectly wrong for each other. But when Melissa’s matchmaking grandmother wins her a date with Brody at a Bachelor auction . . .

Sparks fly. Passion flares. Heat rises. (You get the picture.)

Add a curse, a conniving nightly news anchor, a stunningly handsome daredevil fireman, a brave little boy, a couple of exes, and one giant fire to the mix, and Melissa and Brody’s love may not be the only thing that burns.

I reviewed the book when it was released in May of 2012. At 99c, I’d say this is a great price for a decent contemporary romance. The hero, Captain Brody, is really adorable and the heroine is also very likeable.

Brody is a really great hero. He’s unshakeable. There is a scene early on in the book where Melissa is relating all her assumptions about firemen and Brody doesn’t rise to the bait. His character was consistent throughout. The steadying hand, the leader, the guy who watches out for others. Melissa was observant, as befitting her role as a news producer, and a quick learner. She led her tribe of news people in her own way. She was quick to make amends, didn’t hold grudges, and allowed herself to be educated.