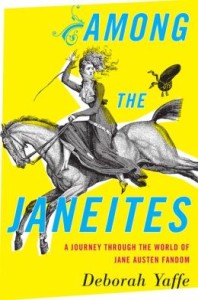 For anyone who has ever loved a Jane Austen novel, a warm and witty look at the passionate, thriving world of Austen fandom
They walk among us in their bonnets and Empire-waist gowns, clutching their souvenir tote bags and battered paperbacks: the Janeites, Jane Austen’s legion of devoted fans. Who are these obsessed admirers, whose passion has transformed Austen from classic novelist to pop-culture phenomenon? Deborah Yaffe, journalist and Janeite, sets out to answer this question, exploring the remarkable endurance of Austen’s stories, the unusual zeal that their author inspires, and the striking cross-section of lives she has touched.

Along the way, Yaffe meets a Florida lawyer with a byzantine theory about hidden subtexts in the novels, a writer of Austen fan fiction who found her own Mr. Darcy while reimagining Pride and Prejudice, and a lit professor whose roller-derby nom de skate is Stone Cold Jane Austen. Yaffe goes where Janeites gather, joining a pilgrimage to historic sites in Britain, chatting online with fellow fans, and attending the annual ball of the Jane Austen Society of North America—in period costume. Part chronicle of a vibrant literary community, part memoir of a lifelong love, Among the Janeites is a funny, touching meditation on the nature of fandom.

It’s Jane Austen’s Birthday today. Prepare for a lot of Jane Austen things. So many things that you may get tired of Jane. 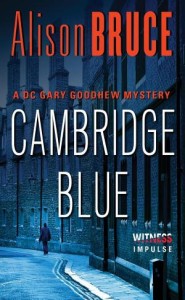 In the legendary university town of Cambridge, the strangled corpse of a young woman is found splayed in an ancient meadow. For Gary Goodhew, the youngest detective in the local police force, it’s a case that could make his career … or end his life. As the body count rises and blood flows through the hallowed halls of the colleges, Goodhew must exorcise his own demons if he’s to survive his first year on the job …

Suspenseful and atmospheric, this mesmerizing thriller will rivet fans of Deborah Crombie and Elizabeth George.

The three star review on Amazon comes from a “verified purchase” which doesn’t mean all that much in today’s world of easily purchased reviews. However, it’s sometimes the only thing we’ve got to help make buying decisions. The reviewer said that the plot was a little thick and denouement was terrible but she enjoyed the writing and was eager for the next book. 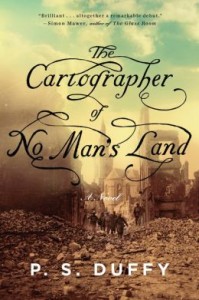 The lauded masterpiece about a family divided by World War I,
hailed as “brilliant . . . altogether a remarkable debut” (Simon Mawer,
author of The Glass Room).

From a village in Nova Scotia to the trenches of France, P. S. Duffy’s astonishing debut showcases a rare talent emerging in midlife.

When his beloved brother-in-law goes missing at the front in 1916, Angus defies his pacifist upbringing to join the war and find him. Assured a position as a cartographer in London, he is instead sent directly into battle. Meanwhile, at home, his son Simon Peter must navigate escalating hostility in a town torn by grief. Selected as both a Barnes & Noble Discover pick and one of the American Bookseller Association’s
Debut Dozen, The Cartographer of No Man’s Land offers a soulful portrayal of World
War I and the lives that were forever changed by it, both on the battlefield and at home.

The sale on this book ends today. The reviews are pretty positive about this book. It’s recommended by BN, received a starred review from Booklist. PW writes “The novel takes a series of surprising plot turns, sometimes leaving the reader wondering how much actually happened and how much was imagined by the characters to protect themselves from horrific realities. Physical and emotional geography are beautifully rendered, and Duffy’s vivid descriptions illuminate war’s transformative effect in fresh ways.” 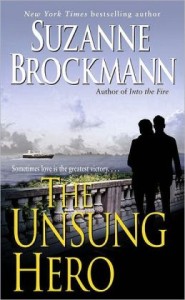 After a near-fatal head injury, navy SEAL lieutenant Tom Paoletti catches a terrifying glimpse of an international terrorist in his New England hometown. When he calls for help, the navy dismisses the danger as injury-induced imaginings. In a desperate, last-ditch effort to prevent disaster, Tom creates his own makeshift counterterrorist team, assembling his most loyal officers, two elderly war veterans, a couple of misfit teenagers, and Dr. Kelly Ashton-the sweet “girl next door” who has grown into a remarkable woman. The town’s infamous bad boy, Tom has always longed for Kelly. Now he has one final chance for happiness, one last chance to win her heart, and one desperate chance to save the day . . .

If you go back over a decade, Suzanne Brockmann was beginning to define the military suspense genre with her SEAL books. It wasn’t until the third book that my attention was really caught but the entire series begins with this book. I recommend not reading past book 5 because it all falls apart after that. The series goes too long and the long anticipated stories that are built up in the first books really fail to deliver. But the first four, particularly books 3 and 4, were great reads.