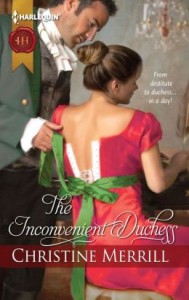 Dear Cici and Father,
I have come to Devon and married a duke. And I’m more tired and hungry than I have ever been in my life. Please let me come home.

Compromised and wedded on the same day, Lady Miranda was fast finding married life not to her taste. A decaying manor and a secretive husband were hardly the stuff of girlish dreams. Yet every time she looked at dark, brooding Marcus Radwell, Duke of Haughleigh, she felt inexplicably compelled—and determined—to make their marriage real!

A holiday story that is free? who is turning down that? No one, I say. No one.  (As you read down and I became more incoherent please note I have a bitch of a head cold today). 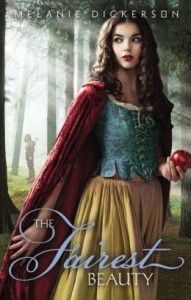 The Fairest Beauty by Melanie Dickerson. $ 1.99

A daring rescue. A difficult choice.

Sophie desperately wants to get away from her stepmother’s jealousy, and believes escape is her only chance to be happy. Then a young man named Gabe arrives from Hagenheim Castle, claiming she is betrothed to his older brother, and everything twists upside down. This could be Sophie’s one chance at freedom—but can she trust another person to keep her safe?

Gabe defied his parents Rose and Wilhelm by going to find Sophie, and now he believes they had a right to worry: the girl’s inner and outer beauty has enchanted him. Though romance is impossible—she is his brother’s future wife, and Gabe himself is betrothed to someone else—he promises himself he will see the mission through, no matter what.
When the pair flee to the Cottage of the Seven, they find help—but also find their feelings for each other have grown. Now both must not only protect each other from the dangers around them—they must also protect their hearts.

Who is not enchanted by her beauty? She looks like Snow White. And the huntsman is RIGHT BEHIND HER. Turn around Snow White, either your lover or enemy is behind you. PS. Your mom hates you. Don’t eat the apple. (also, I have no idea if this is a fairy tale remake). Pubbed by Zondervan. ON NOVEMBER 22, 1963, THREE SHOTS RANG OUT IN DALLAS, PRESIDENT KENNEDY DIED, AND THE WORLD CHANGED. WHAT IF YOU COULD CHANGE IT BACK?

In this brilliantly conceived tour de force, Stephen King—who has absorbed the social, political, and popular culture of his generation more imaginatively and thoroughly than any other writer—takes readers on an incredible journey into the past and the possibility of altering it.

It begins with Jake Epping, a thirty-five-year-old English teacher in Lisbon Falls, Maine, who makes extra money teaching GED classes. He asks his students to write about an event that changed their lives, and one essay blows him away—a gruesome, harrowing story about the night more than fifty years ago when Harry Dunning’s father came home and killed his mother, his sister, and his brother with a sledgehammer. Reading the essay is a watershed moment for Jake, his life—like Harry’s, like America’s in 1963—turning on a dime. Not much later his friend Al, who owns the local diner, divulges a secret: his storeroom is a portal to the past, a particular day in 1958. And Al enlists Jake to take over the mission that has become his obsession—to prevent the Kennedy assassination.

So begins Jake’s new life as George Amberson, in a different world of Ike and JFK and Elvis, of big American cars and sock hops and cigarette smoke everywhere. From the dank little city of Derry, Maine (where there’s Dunning business to conduct), to the warmhearted small town of Jodie, Texas, where Jake falls dangerously in love, every turn is leading eventually, of course, to a troubled loner named Lee Harvey Oswald and to Dallas, where the past becomes heart-stoppingly suspenseful, and where history might not be history anymore. Time-travel has never been so believable. Or so terrifying.

Because there aren’t enough hagiographic novels about JFK, let’s look at this one that apparently is about Jake who travels back in time to become Lee Harvey Oswald. 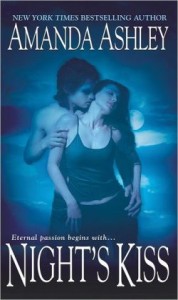 Enter the lush, sensual world of bestselling author Amanda Ashley. . .a place where vampires indulge their appetites, but find they can fall prey to love and desire. Now, an everlasting devotion is sparked across time and space, igniting a passionate affair. . .and a deadly new threat. . .
He Has Found His Soul’s Desire. . .

The Dark Gift has brought Roshan DeLongpre a lifetime of bitter loneliness–until, by chance, he comes across a picture of Brenna Flanagan. There is something hauntingly familiar about her, something that compels him to travel into the past, save the beautiful witch from the stake, and bring her safely to his own time. Now, in the modern world, Brenna’s seductive innocence and sense of wonder are utterly bewitching the once-weary vampire, blinding him to a growing danger. For there is one whose dark magick is strong. . .one who knows who they both are and won’t stop till their powers are his. . .and they are nothing more than shadows through time. . .

Are books published almost a decade ago considered historicals? Maybe retro or vintage? Look at this Vintage Paranormal Romance. They once dominated the landscape of romance and you couldn’t turn around without getting a fang in your face. Now they’ve limped off, defeated by a younger and hotter set of bad boys who fight, do drugs, and kill people. And they don’t angst about those things. Remember all those vampires that just were so emo about living forever and drinking blood? There’s no crying in vampireville, Dracula. Nut up.