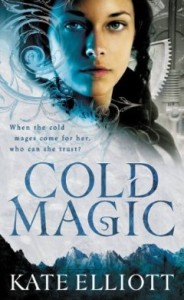 Cat Barahal was the only survivor of the flood that took her parents. Raised by her extended family, she and her cousin, Bee, are unaware of the dangers that threaten them both. Though they are in beginning of the Industrial Age, magic – and the power of the Cold Mages – still hold sway.

Now, betrayed by her family and forced to marry a powerful Cold Mage, Cat will be drawn into a labyrinth of politics. There she will learn the full ruthlessness of the rule of the Cold Mages. What do the Cold Mages want from her? And who will help Cat in her struggle against them?

Jia is a big fan of the Kate Elliott books. I even believe that one year, Kate Elliott’s book was a DABWAHA finalist. Jia reviewed the book:

Cold Magic is touted as Regency icepunk although if it’s set in 1837, shouldn’t it be early Victorian icepunk? Regardless, I hesitate to call this steampunk although I can see why that label could also fit. I actually think gaslight on the verge of becoming steampunk is more accurate. While the novel is very much devoted to Catherine’s story, we are treated to rising tensions in the background between the established order of the cold mages and the impending Industrial Revolution which promises flying dirigibles and other technological wonders. I suspect these will come to the forefront in the sequels. 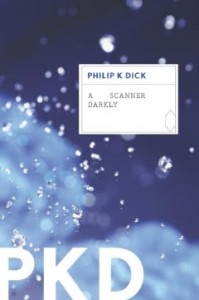 “Dick is Thoreau plus the death of the American dream.”—Roberto Bolaño

Bob Arctor is a junkie and a drug dealer, both using and selling the mind-altering Substance D. Fred is a law enforcement agent, tasked with bringing Bob down. It sounds like a standard case. The only problem is that Bob and Fred are the same person. Substance D doesn’t just alter the mind, it splits it in two, and neither side knows what the other is doing or that it even exists. Now, both sides are growing increasingly paranoid as Bob tries to evade Fred while Fred tries to evade his suspicious bosses.

In this award-winning novel, friends can become enemies, good trips can turn terrifying, and cops and criminals are two sides of the same coin. Dick is at turns caustically funny and somberly contemplative, fashioning a novel that is as unnerving as it is enthralling.

The negative reviews point to a sometimes incoherent narrative which may be explained by the fact that the narrators are high a lot of the time but also that it is hard to connect emotionally because, well, the narrators are habitual drug users who don’t see what is happening to their lives. 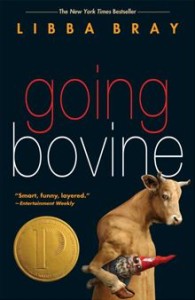 Can Cameron find what he’s looking for?

All 16-year-old Cameron wants is to get through high school—and life in general—with a minimum of effort. It’s not a lot to ask. But that’s before he’s given some bad news: he’s sick and he’s going to die. Which totally sucks. Hope arrives in the winged form of Dulcie, a loopy punk angel/possible hallucination with a bad sugar habit. She tells Cam there is a cure—if he’s willing to go in search of it. With the help of a death-obsessed, video-gaming dwarf and a yard gnome, Cam sets off on the mother of all road trips through a twisted America into the heart of what matters most.

It’s kind of ironic that we have two books here about characters with hallucinations. For many readers, even Bray fans, this book was a bridge too far. Either you are going to love this book or think that you haven’t had enough acid to understand it (which is how I felt when I watched “Eyes Wide Shut”). 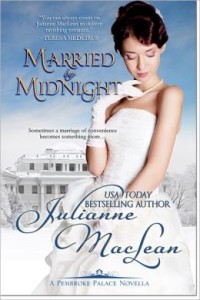 Sometimes a marriage of convenience becomes something more…

AN UNATTAINABLE ROGUE…
For seven years, Lord Garrett Sinclair– the ruggedly handsome illegitimate son of the Duke of Pembroke–has been traveling abroad with no intention of ever returning home to Pembroke Palace… until his father commands that he must marry by Christmas in order to thwart a family curse or lose his inheritance forever. Haunted by a tragic accident that has hardened his soul, Garrett entrusts his brothers to seek out a bride who will agree to a marriage in name only. Her reward? A sizable share of his inheritance–payable immediately after the wedding night….

A BEAUTIFUL TEMPTRESS…
Lady Anne Douglas has been ruined by scandal and disowned by her father. Facing a life of poverty and spinsterhood, she leaps at the generous terms of the marriage contract to ensure her independence. But the charade of a two-week engagement proves more of a challenge than either anticipated when they cannot resist the intoxicating lure of the marriage bed. Anne knows they will part ways after the wedding. Will she dare risk her heart for two weeks of pleasure in the arms of an irresistible rogue? Or will her surrender become her undoing after a most unexpected turn of events mere hours before the wedding?

Reader Kim emailed me about this deal. It is free at BN and Amazon. This is a novella. I’ve never read anything of Maclean’s (that I can recall)