Daily Deals: Famous books that were the inspiration for movies 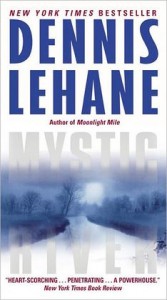 When Jimmy Marcus’ daughter is found murdered, his childhood friend Sean Devine is assigned to the case. His personal life unraveling, the investigation takes Sean back into a world of violence and pain he thought he’d left behind. It also puts him on a collision course with Jimmy Marcus – a man with his own dark past who is eager to solve the crime with brutal justice. And then there is Dave Boyle, a man who hides monstrous secrets beneath a bland facade – secrets his wife, Celeste, is only beginning to suspect. As the race for a killer heats up, all are pulled closer toward an abyss that will force them to face their true selves – and will mark them as irrevocably as the past itself.

Dark and laced with sexually charged violence but widely hailed as fascinating and engaging read. 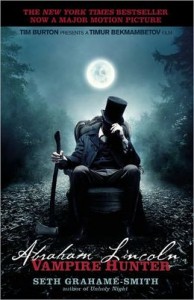 When Abraham Lincoln was nine years old, his mother died from an ailment called the “milk sickness.” Only later did he learn that his mother’s deadly affliction was actually the work of a local vampire, seeking to collect on Abe’s father’s unfortunate debts.

When the truth became known to the young Abraham Lincoln, he wrote in his journal: henceforth my life shall be one of rigorous study and devotion. I shall become learned in all things—a master of mind and body. And this mastery shall have but one purpose.”

While Abraham Lincoln is widely lauded for reuniting the North with the South and abolishing slavery from our country, no one has ever understood his valiant fight for what it really was. That is, until Seth Grahame-Smith stumbled upon The Journal of Abraham Lincoln, and became the first living person to lay eyes on it in more than 140 years.

Using the journal as his guide and writing in the grand biographical style of Doris Kearns Goodwin and David McCullough, Seth has reconstructed the true life story of our greatest president for the first time—all while revealing the hidden history behind the Civil War, and uncovering the massive role vampires played in the birth, growth, and near-death of our nation.

Seth Grahame-Smith’s horror + classic mashups spawned a brief sub genre all its own. 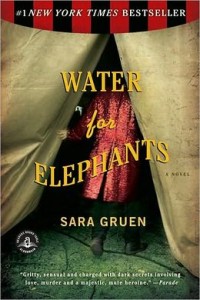 Water for Elephants by Sara Gruen. $

Though he may not speak of them, the memories still dwell inside Jacob Jankowski’s ninety-something-year-old mind. Memories of himself as a young man, tossed by fate onto a rickety train that was home to the Benzini Brothers Most Spectacular Show on Earth. Memories of a world filled with freaks and clowns, with wonder and pain and anger and passion; a world with its own narrow, irrational rules, its own way of life, and its own way of death. The world of the circus: to Jacob it was both salvation and a living hell.

Jacob was there because his luck had run out—orphaned and penniless, he had no direction until he landed on this locomotive “ship of fools.” It was the early part of the Great Depression, and everyone in this third-rate circus was lucky to have any job at all. Marlena, the star of the equestrian act, was there because she fell in love with the wrong man, a handsome circus boss with a wide mean streak. And Rosie the elephant was there because she was the great gray hope, the new act that was going to be the salvation of the circus; the only problem was, Rosie didn’t have an act—in fact, she couldn’t even follow instructions. The bond that grew among this unlikely trio was one of love and trust, and ultimately, it was their only hope for survival.

Surprising, poignant, and funny, Water for Elephants is that rare novel with a story so engrossing, one is reluctant to put it down; with characters so engaging, they continue to live long after the last page has been turned; with a world built of wonder, a world so real, one starts to breathe its air.

John said this about Water for Elephants back in 2011 on Dear Author:

I also read Water for Elephants. Very interesting and melancholy. Not perfect, but it has a certain quality about it that makes you enjoy the ride even if it plods along like a MoFo. 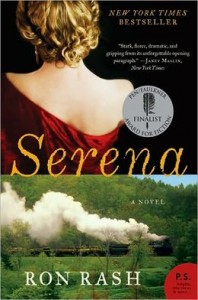 A New York Times notable book of the year

Award-winning and New York Times bestselling novelist Ron Rash conjures a gothic tale of greed, corruption, and revenge with a ruthless, powerful, and unforgettable woman at its heart, set amid the wilds of 1930s North Carolina and against the backdrop of America’s burgeoning environmental movement.

This is a movie coming out in 2013. Apparently Serena, the orphaned but barren young wife, is the villain rather than the weak minded timber baron whose life seems to be controlled by his wife. Don’t read Harriet Klausner’s review unless you want to be totally spoiled.