My only complaint about Holly is sometimes her work veered away from romance and was more fiction. Book One of the bestselling Lux series

When we moved to West Virginia right before my senior year, I’d pretty much resigned myself to thick accents, dodgy internet access, and a whole lot of boring…until I spotted my hot neighbor, with his looming height and eerie green eyes. Things were looking up.

And then he opened his mouth.

Daemon is infuriating. Arrogant. Stab-worthy. We do not get along. At all. But when a stranger attacks me and Daemon literally freezes time with a wave of his hand, well, something…unexpected happens.

The hot alien living next door marks me.

You heard me. Alien. Turns out Daemon and his sister have a galaxy of enemies wanting to steal their abilities, and Daemon’s touch has me lit up like the Vegas Strip. The only way I’m getting out of this alive is by sticking close to Daemon until my alien mojo fades.

If I don’t kill him first, that is.

This is the first in Jennifer Armentrout’s YA series. I haven’t read it but it’s a pretty popular series. Voya gave it a cutting review calling the prose juvenile. RT describes it as a cross between Roswell and Dawson’s Creek.

Note that there are two versions of Obsidian at Apple but one is free and the other is $2.99 An expert in etiquette, Emma takes her pristine reputation most seriously.

But the devilish Lord Marlowe is determined to prove that some rules of proper behavior are made to be broken . . .

This was in the Girl Bachelor series, IIRC. I apparently loved it and gave it an A…Sadly I don’t remember even a bit of it so my grade may have been overinflated. 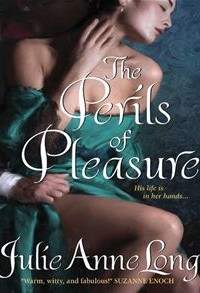 Scandal has rocked the city of London. Colin Eversea, a handsome, reckless unapologetic rogue is sentenced to hang for murder and, inconveniently for him, the only witness to the crime disappears. Then again, throughout history, the Everseas have always managed to cheat fate in style: Colin is snatched from the gallows by a beautiful, clever mercenary.

Cool-headed, daring Madeleine Greenway is immune to Colin’s vaunted charm. Her mission is not to rescue Colin but to kidnap him, and to be paid handsomely for it. But when it becomes clear that whoever wants Colin alive wants Madeline dead, the two become uneasy allies in a deadly race for truth. Together, they’ll face great danger—and a passion neither can resist.

I gave up on the series when I learned that the one romance I wanted to be told wouldn’t be told for quite some time. I guess the question is if I liked the writing, why wouldn’t I just enjoy the journey? I don’t know other than to say I didn’t want to be continually teased in the text about a romance that wasn’t going to happen for years.

Janine gave this book a B

I thought the second half of the book was much stronger than the first. Here, we were given many of the answers to the questions about Madeleine, and learning the truth about her past made her character more whole and complete. This was also the part of the book where Madeline and Colin grew closer and their circumstances improved, so that the charm and humor which had seemed jarring in the book’s first half were more fitting in the second. I enjoyed the second half of the book very much.

I want to mention that The Perils of Pleasure has quite a few strengths. Among them are the unusual plot and setting. I thought the piecing together of the mystery was very well done, and I loved that the book was set in parts of London we don’t often see and featured some unusual side characters.