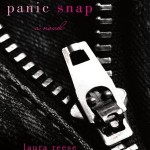 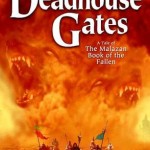 This is the first book in the Malazan Empire series. This title and it’s sequel, Deadhouse Gates, are on sale for $2.99.

“The Malazan Empire simmers with discontent, bled dry by interminable warfare, bitter infighting and bloody confrontations with the formidable Anomander Rake and his Tiste Andii, ancient and implacable sorcerers. Even the imperial legions, long injured to the bloodshed, yearn for some respite. Yet Empress Laseen’s rule remains absolute, enforced by her dreaded Claw assassins.”

“For Sergeant Whiskeyjack and his squad of Bridgeburners, and for Tattersail, surviving cadre mage of the Second Legion, the aftermath of the siege of Pale should have been a time to mourn the many dead. But Darujhistan, last of the Free Cities of Genabackis, yet holds out. It is to this ancient citadel that Laseen turns her predatory gaze.” However, it would appear that the Empire is not alone in this great game. Sinister, shadowbound forces are gathering as the gods themselves prepare to play their hand. 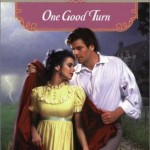 Preorder. November 13, 2012. I’m going to have to shake the DA trees because I know some of the reviewers have read this book. If I recall correctly, One Good Turn is a favored Carla Kelly title. The Romance Reader gave it 5 Stars:

Kelly’s clever prose is a hallmark of her writing, and it’s here in spades. Her style is such that a reader can breeze along, engrossed in the plot, and then be brought up short by a small phrase which reveals a great deal. Take this example, early on, when the hapless Nez observes Liria caring for Sophie:

I am in the presence of female competence, he marveled. God bless the ladies.

Libby’s London Merchant, the predecessor to this book is also on sale for $2.99 (pre order, delivery September 11, 2012)

Beautiful Miss Libby Ames knew little about the man who landed unexpectedly at her country manor. Only that he called himself Mr. Nesbitt Duke, a London merchant. And after one look at Libby, he claimed he’d fallen in love. But it was soon clear that this handsome stranger was not being entirely truthful. 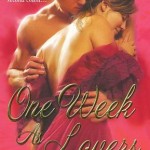 The price is $2.99 at Amazon and over $4.00 at Barnes and Noble. There is a Kobo coupon if you are an ePub reader that brings the price down to $2.30. The Kobo coupon is ac4auto45. Robin reviewed the book at Dear Author:

In essence, One Week as Lovers is the story of Lancaster’s healing from a trauma that has shaped all of his adult life and made a man so easy to love horribly self-loathing. And he needs a woman like Cynthia to help him accomplish the job – a woman who thinks nothing of calling him ridiculous and scolding him for treating her like a china cup on a shelf. And despite Cynthia’s own insistence that she – an uneducated country woman – has nothing to recommend her for a match with Nick, whom she has loved for a long time, Nick recognizes right away that Cynthia is different from all the other women he has known.

Some Pleasures, Once Tasted. . .

Even after finding his betrothed in the arms of another man, Nicholas, the Viscount Lancaster, knows he must wed. Propriety—and the dire state of his finances—decrees it. At least a visit to his country estate provides relief from playing the role of loving fiancé, as well as a surprising encounter with Cynthia Merrithorpe. Once his childhood companion, Cynthia has grown into a lovely, alluring woman—one who’s undertaken a daring ruse to avoid being sold into a miserable marriage.

Are Too Delicious To Forget. . .

When Nicholas left for London to assume his new title, Cynthia was forced to put aside her girlish infatuation. Now he’s returned, more wickedly attractive than ever. And this time, Cynthia is determined to experience the pleasure she’s dreamed of for so long. But with a man like Nicholas, seduction is only the beginning of a sensual journey that will tempt them both to defy convention, and uncover the very heart of desire. . . 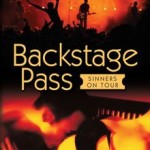 Five stunning guys, one hot woman, and a feverish romance… For him, life is all music and no play… When Brian Sinclair, lead songwriter and guitarist of the hottest metal band on the scene, loses his creative spark, it will take nights of downright sinful passion to release his pent-up genius… She’s the one to call the tune… When sexy psychologist Myrna Evans goes on tour with the Sinners, every boy in the band tries to seduce her. But Brian is the only one she wants to get her hands on… Then the two lovers’ wildly shocking behavior sparks the whole band to new heights of glory…and sin…