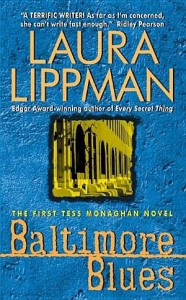 Until her paper, the Baltimore Star, crashed and burned, Tess Monaghan was a damn good reporter who knew her hometown intimately — from historic Fort McHenry to the crumbling projects of Cherry Hill. Now gainfully unemployed at twenty-nine, she’s willing to take any freelance job to pay the rent — including a bit of unorthodox snooping for her rowing buddy, Darryl “Rock” Paxton.
In a city where someone is murdered almost everyday, attorney Michael Abramowitz’s death should be just another statistic. But the slain lawyer’s notoriety — and his noontime trysts with Rock’s fiancee — make the case front page news…and points to Rock as the likely murderer. But trying to prove her friend’s innocence couls prove costly to Tess — and add her name to that infamous ever-growing list.

This is the first book in the Tess Monaghan series. A few reviews said the pacing was awkward and that the book spent too much time building up the family members. However it must be good enough because this was the first of a long running series. 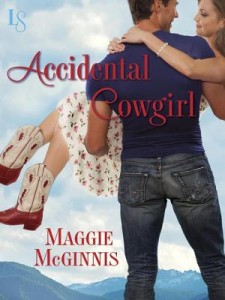 In her Loveswept debut, Maggie McGinnis tells the tale of a city girl who’s running on fumes—and the cowboy who shows her all the good things she’s been missing.

After being betrayed by her con man ex-fiancé, Kyla Bennett nurses a broken heart. But Kyla’s friends have other ideas and when they whisk her off to Whisper Creek, a dude ranch staffed by cowboys so hot they dim the Montana sunset, all Kyla wants to do is hide under a quilt. Then in rides Decker Driscoll. He’s hauling about as much emotional baggage as Kyla, but when he stands close by, both of them want to stay close—and begin to succumb to an undeniable attraction.
After experiencing personal tragedy, Decker never thought he’d see Big Sky country again. But now that his family’s Whisper Creek property is in deep with a Vegas gambler, Decker’s back for the summer—and spending all his time running from “cowgirls” who come to the dude ranch to score some dudes. Then he meets Kyla, a kindred spirit who brings on a stampede of protective feelings . . . and a powerful hankering to sear her with a new brand of love.

The reviews say that this is a sweet romance with no explicit love scenes. The author has a tendency to skip over the big emotional moments which are sometimes recapped at a later date. 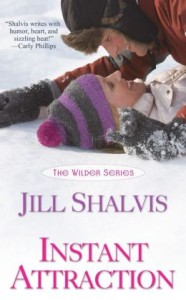 The first in a sensational new series, Jill Shalvis introduces Cameron, Stone, and T.J. Wilder–three bad-boy heroes who effortlessly mix breathtaking adventure and scorching sex appeal. . .
Get Wild. . .And Then Get Wilder. . .

Accountant Katie Kramer is a quintessential good girl–working hard, recycling diligently, all the while trying to ignore the feeling that she doesn’t fit in anywhere. That’s all she wants. Well, that–and amazing sex, and the kind of daredevil escapade she can look back on when she’s crunching numbers in a dusty cubicle. Which explains why she just took a job in Wishful, California, working for Wilder Adventures and Expeditions. Waking up to find a magnificently built stranger towering over her bed–that part defies explanation. . .

I really liked this series of books that starts with Instant Attraction. Instant Gratification and Instant Temptation are on sale for $2.99 as well. Instant Attraction features a former champion snowboarder as he deals with his loss of fame and career after a career crippling injury. This is one of the books that Sarah and I promoted during our Save the Contemporary campaign.

If you can’t remember four years ago, finding a straight contemporary was more difficult than hunting for truffles in the woods. Now they are everywhere. Like moss. 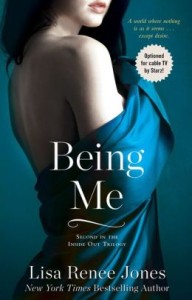 I arch into him, drinking in his passion, instantly, willingly consumed by all that he is and could be to me. . . .
Sara McMillan is still searching for Rebecca, the mysterious woman whose dark, erotic journal entries both enthralled and frightened her. Tormented by a strong desire to indulge the demands of her new boss while also drawn deeper into her passionate bond with the troubled artist, Chris Merit, Sara must face a past as deeply haunting as Rebecca’s written words. In one man’s arms, Sara will find the safe haven to reveal her most intimate secrets and explore her darkest fantasies. But is safety just an illusion, when the truth about Rebecca has yet to be discovered?

This is the second book in the Inside Out series. If I Were You is the first in the series and has been on sale several times. The series is also being made into a television show by Starz.