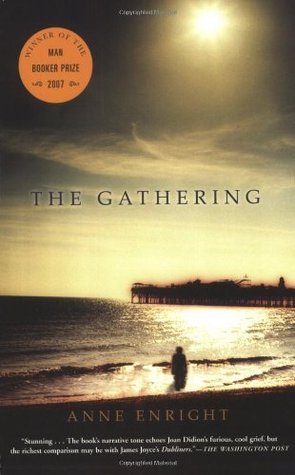 The nine surviving children of the Hegarty clan are gathering in Dublin for the wake of their wayward brother, Liam, drowned in the sea. His sister, Veronica, collects the body and keeps the dead man company, guarding the secret she shares with him—something that happened in their grandmother’s house in the winter of 1968. As Enright traces the line of betrayal and redemption through three generations her distinctive intelligence twists the world a fraction and gives it back to us in a new and unforgettable light. The Gathering is a daring, witty, and insightful family epic, clarified through Anne Enright’s unblinking eye. It is a novel about love and disappointment, about how memories warp and secrets fester, and how fate is written in the body, not in the stars.

NYT says it’s a heavy book which may account for the three star rating on Goodreads. However, despite the tone, the reviewer says “In this new novel, however, Enright hides her painterly brushstrokes. “The Gathering” still casts fiction’s spell, but its detours from reality are surreal, not unreal: nothing happens that could not happen, that has not happened, to somebody. Bringing together the skills she has honed along the way, Enright carries off her illusions without props or dei ex machina, bravely engaging with the carnival horrors of everyday life.

As Veronica struggles to understand her brother’s suicide, she tells herself that she owes it to Liam to acknowledge his past, their past, without flinching. “We know that real events have real effects. In a way that unreal events do not,” she reasons. Liam’s great talent, she believes, was “exposing the lie.” In “The Gathering,” Enright lets Veronica do something even harder: expose the truth.” Pen Holloway’s done with men—in real life.
Guys in game are so much less drama. But when her partner from Heroes of Fallen Gods invites her to the convention of the year, she panics. What if he’s another jerk? What if he’s not?

Cal Burrows is living his dream of being a spy.
One of TRAIT’s misfit spies, but still a spy. It’s the perfect job… until an arms dealer with a taste for blood invades his not-so-secret geek haven. All Cal wanted from ConDamned was to meet his on-line girl. Now, with the threat of mass murder looming, he’s forced to choose between keeping his mission a secret and protecting the girl of his dreams.

Despite their attraction, Pen can’t help but suspect Cal’s hiding something. She also can’t shake the feeling he’s not as much of a stranger as he seems.

Leanne at Goodreads mentioned that it was a little too geeky for her with regular references to shows she’s never seen. “It’s definitely for those who enjoy comics, online-gaming, cosplay and conventions.” They were masters of the darkness, searching through eternity for a mistress of the light . . .

The stranger silently summoned her from across the continents, across the seas, whispering of eternal torment, of endless hunger . . . of dark, dangerous desires. And somehow American surgeon Shea O’Halloran could feel his anguish, sense his haunting aloneness.

Drawn to the far Carpathian Mountains, Shea found a ravaged, raging man, a being like no other. And she trembled. For in his burning eyes she recognized the beloved stranger who’d already become part of her.

I’m gearing up to start a re-read of Dark Prince, the first in the Carpathian series (also $2.10). I remember being blown away when I first read this series. The entire blurb is this “The dashing rogue is finally coming home to claim the exquisite stranger who is living there, a willful beauty he barely knows . . . his bride.”

The reviews are almost universal that the ending was a bit of a let down. On the plus side, there is no bodice ripping, too much dialogue during the sex scenes (yes, I think that’s a plus), and likable characters. But the ending…