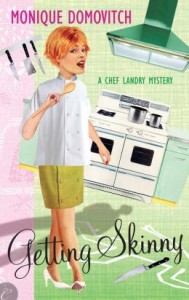 Getting Skinny by Monique Domovitch. $ 2.99

Owning a restaurant is as crazy for Nicky Landry as an alcoholic owning a bar. But despite having to cram herself into a body shaper to look decent in a dress, life is pretty good. She’s throwing the party of the year for her graduating doctor boyfriend, Rob, who she’s sure is going to propose—until his new girlfriend shows up at the party.

After ordering Rob to get his stuff out of her house and get lost, Nicky finds him faceup with her expensive Chroma knife sticking right out of his cheating heart.

As the prime suspect, Nicky is in hot water. And no matter how hard she tries to clear her name, her problems only mount. She’s convinced she can solve the murder—if only she can figure out the identity of the skinny person seen walking away with Rob after the party.

Getting “Skinny” won’t be easy for Nicky, but she never imagined it would be life or death?

I had no idea that Carina Press was doing cozy mysteries.  This is a, as one goodreads reviewer called it, “a Canadian chick-lit detective murder mystery!” 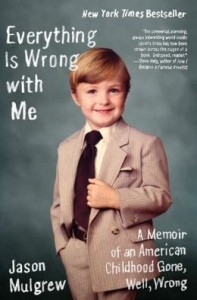 Everything Is Wrong with Me: A Memoir of an American Childhood Gone, Well, Wrong by Jason Mulgrew. $ 1.99

Fans of Jason Mulgrew’s wildly popular blog know that everything really is wrong with him. The product of a raucous, not-just-semi-but-fully-dysfunctional Philadelphia family, Jason has seen it all—from Little League games of unspeakable horror to citywide parades ending in stab wounds; from hard-partying longshoremen fathers to feathered-hair, no-nonsense, kindhearted mothers; and from conscience-crippling Catholic dogmas to the equally confounding religion of women. With chapter titles like “My Bird: Inadequacy and Redemption” (no, he is not referring to a parakeet) and “On the Relationship Between Genetics and Hustling,” Everything Is Wrong with Me proves that, as Jason puts it, “writing is a fantastical exercise in manic depression”—but he never fails to ensure that laughter is part of the routine.

With echoes of Jean Shepherd transplanted to Philly in the eighties and nineties, this book is a must-read for every person who looks back wistfully on his or her childhood and family and wonders, “What were we thinking?”

I guess this would be a book if you wanted insight into the dark and scary space called “male”. Mulgrew doesn’t dwell sentimentally on his parents’ rocky relationship, and in comparison to the seemingly endless run of adventures in ersatz jock-and-studhood, there’s relatively little about his mother or his siblings. Instead, the book takes readers deep into a traditional, working-class social world where sports, Jackass-type pranks, and loyalty reigned. True to the lad-lit form and content, the narrative is often downright crude, with a Maxim-article tone Per Publishers Weekly

In this charming contemporary romance, sure to delight readers of Rachel Gibson and Susan Elizabeth Phillips, a bad girl gone good meets her match when an old flame comes to town.

When life goes awry for wild and sexy Julia Boudreaux, she packs up her stiletto heels and swears off guys who spell nothing but trouble. And to keep her job in television, she decides to create a TV hit—a makeover show. She’s going to turn rugged West Texas men into sensitive guys. Easier pitched than done.

Undercover cop Ben Prescott is so sexy it hurts. Back in Julia’s orbit after a brush with a bullet, Ben steers clear of the woman who used to set his blood afire. She’s changed from Mae West to Mother Teresa, and she’s trying to put him in touch with his emotions. But when life heats up, will this rugged hunk risk everything for a woman who’s about to lose it all?

Originally published in 2004, this is the last of a trilogy of contemporary romances. Reviews say that the plot is rather silly but a nice conclusion to the series.  The rest of the “Simply” series is $2.99 as well. 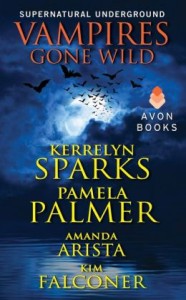 The vampires have gone wild in this collection of never-before-published stories by bestselling authors Kerrelyn Sparks and Pamela Palmer, and two rising stars of paranormal romance!
V is for VampWoman by Kerrelyn Sparks

Pamela decides to shed her prim and proper ways for spandex and a mask to help fight the Malcontents. Now if only she weren’t so distracted by the sexy vampire fighting by her side . . .
A Forever Love by Pamela Palmer

Trapped in Vamp City, Lukas has been unable to return to the beauty who stole his heart. But now that she’s stumbled into his world, it will take every ounce of cunning he possesses to keep her alive.
First Dates Are Hell by Amanda Arista

Valiance’s first date in a hundred years is going great . . . until they’re attacked in the parking lot and quiet, unassuming Esme turns out to be way more than she appears.
Blood and Water by Kim Falconer

Beneath the waves of San Francisco Bay lives a vampire race that wants nothing to do with the “landers” except to feed on them. But when Stellan sets eyes on Angelina, everything changes.