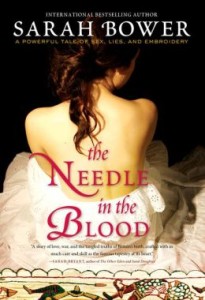 His lust for power gave him everything. But it might cost him the love of his life.

The Bishop hired her for a simple job: embroider a tapestry. It is an enormous work, a cloth trophy of the conquest of England. But her skill with a needle and thread is legendary. It would be uncomplicated.

She plans to kill him as soon as she gets the chance. He and his brother, William the Conqueror, murdered her King and destroyed her world. Revenge, pure and clean. It would be simple.

But neither planned to fall desperately in love. As the two become hopelessly entangled, friends become enemies, enemies become lovers, and nothing in life—or the tapestry—is what it seems. An unlikely love story born of passion and intensity, crafted by critically acclaimed historical novelist Sarah Bower,The Needle in the Blood is a “story of love, war, and the tangled truth of England’s birth.”

This story has an interesting premise but I don’t believe it is a romance. 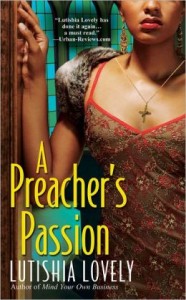 A Preacher’s Passion by Lutishia Lovely. $ 1.99

Overview
After being celibate for five long years, Passion Perkins is ready, willing, and able to end her drought. But she’s also determined to hold out for Mr. Right-a man her friends say doesn’t exist-until handsome Lavon Chapman walks into her life. He’s come to the community to film a DVD about Passion’s minister, Doctor Stanley Lee, and his fiery wife, Carla Lee. Now Passion only has eight weeks to make Lavon her husband and end her celibacy-not necessarily in that order. But she has a most unlikely rival:

Before long, other members of the church community are entangled in scandals of their own, and while some are getting busy in service to the Lord, others are just simply getting busy…

This book has only a few text reviews which are full of praise. 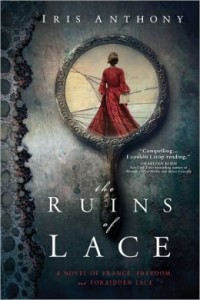 Lace is a thing like hope.
It is beauty; it is grace.
It was never meant to destroy so many lives.

For Lisette, lace begins her downfall, and the only way to atone for her sins is to outwit the noble who know demands an impossible length of it. To fail means certain destruction. But for Katharina, lace is her salvation. It is who she is; it is what she does. If she cannot make this stunning tempest of threads, a dreaded fate awaits.

A taut, mesmerizing story, The Ruins of Lace explores the intricate tangle of fleeting beauty, mad obsession, and ephemeral hope.

This book has some DNF reviews and some positive reviews but even the positive ones say that there is an overabundance of POVs in the story despite the interesting premise of lace as contraband. 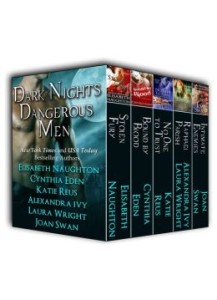 From romantic suspense to paranormal romance; from a full length novel to a bite sized novella, whatever you’re looking for, we’ve got the story for you!

To unearth a centuries-old secret, an archaeologist must team up with the rakish thief who’s stolen both an ancient relic and her heart…

BOUND BY BLOOD by Cynthia Eden

Married to the enemy. In order to save her clan, vampire princess Morgan LaBeaux will do anything…even marry werewolf alpha Jace Vaughn. She may have to trust him with her life, but Morgan vows to never give the wolf her heart.

NO ONE TO TRUST by Katie Reus

When Elizabeth Martinez is shoved into the cross hairs of one of Miami’s death-dealing drug lords she has no choice but to depend on former Marine Porter Caldwell, her ex-boyfriend and the one man she’s tried desperately to forget.

The brilliant and dangerous diplomat of the Pantera shapeshifters, Raphael has devoted his life to discovering the key to the infertility that is threatening the extinction of his puma race. Creating a vast network of spies worldwide, he never expected to discover that the answer might be beneath his very nose. But when Ashe, a beautiful human female, crosses his path, his most primitive instincts are stirred. Unable to resist, he takes her to his bed, and is shocked when she
becomes pregnant with his child. It’s a miracle that might prove to be the salvation of his people, but only if he can keep her safe from the mercenaries determined to kill her.

Untamed and undeniably sexy, Parish, leader of the Pantera hunters, rarely leaves the magic of the Wildlands to deal with the humans he despises. But with the prized and risky Pantera birth on the way, puma shifter, Parish must travel to New Orleans to find and bring back a human doctor. The moment he sees the lovely, talented and all too human Dr. Julia Cabot he cannot resist the wild, potent drive to make her his. Betrayed and destroyed by love, Julia will not let her heart choose her path again. But as she and Parish fight to save the life of an unborn child, a fierce and overwhelming bond develops between them, threatening her frozen heart with the secret hope and ultimate temptation of love and family.

An emergency physician on leave returns to Baja Mexico in search of answers in the deaths of her mother and stepbrother and uncovers buried secrets that threaten her life and a man who threatens her heart.

I’ve not read any of these authors. It seems like a good deal. I really disliked the one Joan Swan book I read.