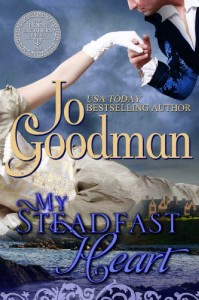 Colin Thorne finds his way out of a London workhouse but at the cost of losing his two younger brothers. With an uncertain future ahead of him, Colin makes seafaring his life until the inexorable pull of revenge draws him back to London. The debt owed to him by the Earl of Weybourne will be paid.

Weybourne Park has been Mercedes Leydon’s home her entire life. Now serving as the estate’s manager and caretaker of her uncle’s two children, Mercedes knows the earl’s frequent absences are what make Weybourne Park a home.

But the earl’s gaming has taken its toll and she and her young cousins are faced with losing everything to a devil-of-a-stranger calling in a debt that can’t be paid.

Casting caution aside, Mercedes will make a new bargain with this devil. If it’s her soul he wants—or her body—she will give it to him and stake her own claim on his steadfast heart.

This is a digital release of a backlist title. I hope that means the Compass Club series is just around the corner! Goodman is one of my very favorite authors but I admit I don’t remember this book. Good thing it is such a nice price. 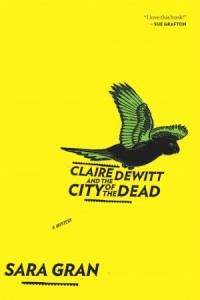 Claire DeWitt believes she is the world’s greatest PI, even if few agree with her. A one-time teen detective in Brooklyn, she is a follower of the esoteric French detective Jacques Silette, whose mysterious handbook Détection inspired Claire’s unusual practices.

Claire also has deep roots in New Orleans, where she was mentored by Silette’s student the brilliant Constance Darling—until Darling was murdered. When a respected DA goes missing she returns to the hurricane-ravaged city to find out why.Claire DeWitt and the City of the Dead is a knockout start to a bracingly original new series.

Claire has “sass and flavor”. Sass. Oye. That was from Elle magazine. I much prefer the description from New Orleans Times-Picayune:

“What would you get if that punkish dragon girl Lisbeth Salander met up with Jim Sallis’s Lew Griffin walking the back streets of New Orleans? Or Sue Grafton’s Kinsey Millhone transformed herself into a tattooed magnolia driving a 4×4? Clare DeWitt, that’s what you’d get . . . DeWitt’s mesmerizing character and memorable voice take your breath away.” 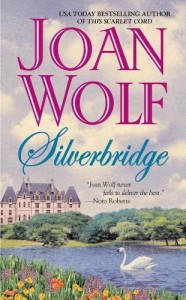 Starring in the role of a lifetime, Tracy Collins goes on location to film a movie set amid the elegance of Regency England. Here, on the lush, sprawling estate of Silverbridge, the American actress is caught between the clashing egos of cast and crew…and undeniably intrigued by Harry Oliver, the devastatingly attractive lord of the manor. Then Tracy begins to have startling visions from the past, more menacing than the dramatic scenes she enacts for the camera. Suddenly, terrifying acts of sabotage and attempted murder-all too real and very much in the present-threaten her and Harry. At stake is a legacy too precious to lose…and a love as fragile as a dream foretold long ago.

I didn’t love Silverbridge but part of my problem with it was that it was too similar to Wolf’s previous stories. It felt recycled to me. If you haven’t read a lot of Joan Wolf, however, you might like this story. 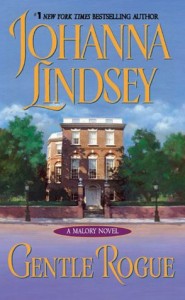 Heartsick and desperate to return home to America, Georgina Anderson boards the Maiden Anne disguised as a cabin boy, never dreaming she’ll be forced into intimate servitude at the whim of the ship’s irrepressible captain, James Mallory.

The black sheep of a proud and tempestuous family, the handsome ex-pirate once swore no woman alive could entice him into matrimony. But on the high seas his resolve will be weakened by an unrestrained passion and by the high-spirited beauty whose love of freedom and adventure rivals his own.

These Lindsey books are cycling through different price points as Amazon likely tests out which price point is optimum. But A Gentle Rogue is one of my favorites. I don’t remember any raping going on in this book! The Mallory series begins with Love Only Once followed by “Tender Rebel”, “Gentle Rogue”, “The Magic of You”, and “ay You Love Me”. Most recently Lindsey put out “The Present: The Malory Holiday Novel.”

→ Jane
Previous article: REVIEW: Mate Claimed by Jennifer Ashley
Next Post: Why I read YA