Daily Deals: Classic gay fiction & YA, and a thrill ride to Christmasland 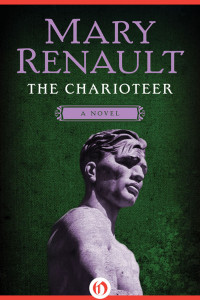 After being wounded at Dunkirk in World War II, Laurie Odell is sent back home to a rural British hospital. Standing out among the orderlies is Andrew, a bright conscientious objector raised as a Quaker. The unspoken romance between the two men is tested when Ralph, a friend of Laurie’s from school, re-enters his life, introducing him into a milieu of jaded, experienced gay men. Will Laurie reconcile himself to Ralph’s embrace, or can he offer Andrew the idealized, Platonic intimacy he yearns for?

This novel has been called one of the foundation stones of gay literary fiction, ranking alongside James Baldwin’s Giovanni’s Room and Gore Vidal’s The City and the Pillar. Celebrated for its literary brilliance and sincere depiction of complex human emotions, The Charioteer is a stirring and beautifully rendered portrayal of love.

This ebook features an illustrated biography of Mary Renault including rare images of the author.

A classic novel of war, love, and coming of age, I reviewed this when it finally came out in ebook form thanks to Open Road. If you didn’t buy it then, you should definitely buy it now. It’s gay romance but the emphasis is on the relationships, not the sex. And the cocktail party scene is worth the price of admission all by itself. It took me forever to finally read this book because I was afraid it couldn’t live up to the hype. Don’t make the same mistake I did! In a richly imagined, beautiful novel, an acclaimed writer gives an epic heroine her voice.

In The Aeneid, Vergil’s hero fights to claim the king’s daughter, Lavinia, with whom he is destined to found an empire. Lavinia herself never speaks a word. Now, Ursula K. Le Guin gives Lavinia a voice in a novel that takes us to the half-wild world of ancient Italy, when Rome was a muddy village near seven hills.

Lavinia grows up knowing nothing but peace and freedom, until suitors come. Her mother wants her to marry handsome, ambitious Turnus. But omens and prophecies spoken by the sacred springs say she must marry a foreigner—that she will be the cause of a bitter war—and that her husband will not live long. When a fleet of Trojan ships sails up the Tiber, Lavinia decides to take her destiny into her own hands. And so she tells us what Vergil did not: the story of her life, and of the love of her life.

Lavinia is a book of passion and war, generous and austerely beautiful, from a writer working at the height of her powers.

I am woefully under-read in Le Guin’s oeuvre but even I know that she is one of the towering writers of the 20th century. This book takes a minor character from Virgil’s Aeneid and imagines her life. It’s technically a YA novel, I guess, but like everything else Le Guin writes, everyone should read it. I can’t do it justice, so I’m counting on the awesome DA commentariat to come to my rescue below. Part 1 of the Touchstone trilogy.

On her last day of high school, Cassandra Devlin walked out of exams and into a forest. Surrounded by the wrong sort of trees, and animals never featured in any nature documentary, Cass is only sure of one thing: alone, she will be lucky to survive.

We’ve talked about Stray many times in comment threads here at Dear Author, but newer visitors might not be award of Höst’s work. It’s free again for a little while, and it’s well worth the cost of your time. I assumed we had reviewed it at some point, but we haven’t. Technically YA, once again, but also written for just about everyone to read. NOS4A2 is a spine-tingling novel of supernatural suspense from master of horror Joe Hill, the New York Times bestselling author of Heart-Shaped Box and Horns.

Victoria McQueen has a secret gift for finding things: a misplaced bracelet, a missing photograph, answers to unanswerable questions. On her Raleigh Tuff Burner bike, she makes her way to a rickety covered bridge that, within moments, takes her wherever she needs to go, whether it’s across Massachusetts or across the country.

Charles Talent Manx has a way with children. He likes to take them for rides in his 1938 Rolls-Royce Wraith with the NOS4A2 vanity plate. With his old car, he can slip right out of the everyday world, and onto the hidden roads that transport them to an astonishing – and terrifying – playground of amusements he calls “Christmasland.”

Then, one day, Vic goes looking for trouble—and finds Manx. That was a lifetime ago. Now Vic, the only kid to ever escape Manx’s unmitigated evil, is all grown up and desperate to forget. But Charlie Manx never stopped thinking about Victoria McQueen. He’s on the road again and he’s picked up a new passenger: Vic’s own son.

Amazon informs me that this title is pronounced Nosferatu, for which I am grateful. Joe Hill has great fiction and horror bloodlines (Stephen and Tabitha King are his parents) but he comes by his high reputation honestly, through the quality of his work. This book will apparently make you see Christmas in a different light, and not necessarily a good one. Presumably it speaks to those of us who think the Christmas season already has some horrifying aspects. Critics suggest that it is longer than it needs to be at 700 pages, to which I say bah. I love Big Fat Books.