Intimate Strangers: A city girl & a hard-bodied cowboy, stranded alone together in the wilderness.

Night Fires: New Orleans. Mardi Gras. A woman on the run, and the lover who may also be her killer.

Fly Like an Eagle: He’s a reformed jewel thief, or so he claims. But he also steals women’s hearts.

Deal With The Devil: A nation in flames. A dangerous stranger can save her, if she agrees to become his wife.

Lovescenes: A rock star making a career change. A struggling actress. Is he using her to get what he wants?

I believe these were originally HPs. Marton’s bio says that she just completed her 80th novel, signed her latest multi-book contract, and has approximately 35,000,000 (and counting!) books in print in twenty-plus languages. 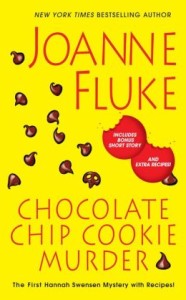 Discover The Delicious Mystery That Started It All!

No one cooks up a delectable, suspense-filled mystery quite like Hannah Swensen, Joanne Fluke’s dessert-baking, red-haired heroine whose gingersnaps are as tart as her comebacks, and whose penchant for solving crimes–one delicious clue at a time–has made her a bestselling favorite. And it all began on these pages, with a bakery, a murder, and some suddenly scandalous chocolate-chip crunchies. Featuring a bonus short story and brand new, mouthwatering recipes, this new edition of the very first Hannah Swensen mystery is sure to have readers coming back for seconds. . .

Hannah already has her hands full trying to dodge her mother’s attempts to marry her off while running The Cookie Jar, Lake Eden’s most popular bakery. But once Ron LaSalle, the beloved delivery man from the Cozy Cow Dairy, is found murdered behind her bakery with Hannah’s famous Chocolate Chip Crunchies scattered around him, her life just can’t get any worse. Determined not to let her cookies get a bad reputation, she sets out to track down a killer. But if she doesn’t watch her back, Hannah’s sweet life may get burned to a crisp.

This is a very successful mystery series. I believe they fall under the category of “cozy mysteries.” 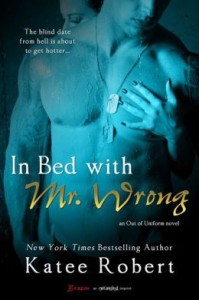 The blind date from hell is about to get hotter…

Brianne Nave is never doing her friends a favor again. When they begged her to go on a blind date, she didn’t expect someone so perfectly gorgeous. She’s a mousy librarian—totally not in this man’s league. And judging by his odd reaction when she opens the door, he knows it, too.

Air Force Pararescuer Ryan Flannery avoids his hometown at all costs. He’s not thrilled about the date until he’s shocked silent by the prickly little librarian’s sweet curves and kissable lips…and her smart mouth. But then an argument leads to a kiss that spirals out of control. How can two people have so little chemistry outside the bedroom when they fit together so perfectly in it?

When their friends strand them in a cabin to “work things out,” Bri’s not sure whether to kill him or put the industrial-sized box of condoms they find to use. Bottom line—Ryan’s career military and hates the tiny town she loves. He’ll leave, just like everyone else in her life. And if she’s foolish enough to give him her heart, he’ll take it with him.

For some reason (and this is not at all like me), I’m having problems pulling the trigger on this book. Can you guys convince me? 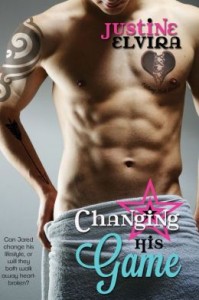 Changing His Game by Justine Elvira. $.99

These are the kind of movies I’ve never planned to watch. It was a taboo topic where I grew up. As a kid I had only heard of it in passing. In middle school my parents would talk about my creepy uncle Frank and how he should look for a job instead of watching “those movies” all day. In High School boys thought it was funny to ask my friends and me to star in the amateur adult films they were making. In college most of my guy friends watched them, but I never had. When I moved to California that changed.

After surprising my fiancé at home and catching him screwing another woman, I hopped in my car and started driving. I was running away from my old life and I needed a change. I remembered my friend Tawny inviting me to visit her in Los Angeles, so that’s where I went.

I didn’t find Tawny when I got there, but I did find her gorgeous roommate, Jared. Our friendship started out rough, but he gave me a place to stay and helped me get back on my feet. He became my best friend. My best friend who millions of women happened to lust over.

Jared plays by a different set of rules, where anything goes. His lifestyle is unlike anything I’ve ever witnessed before and it scares me. When you live your life on the edge, eventually you’ll fall over. I didn’t want to see that happen to him.