is $30 off with SantaHDX coupon code. Free one day shipping on select Kindles. 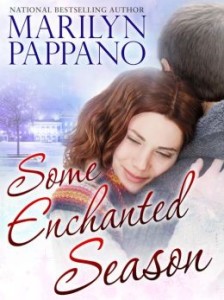 Some Enchanted Season by Marilyn Pappano. $ .99

Overview
Sometimes miracles do happen. When Maggie left her husband Ross that fateful Christmas Eve, their marriage was over. But a near fatal accident on an ice-slick road changed everything. Now another Christmas approaches. While Maggie hasn’t regained all her memory, she’s ready to test her strength at home–with Ross as her only companion. Sharing a house with him once more, putting on the best face for their neighbors, Maggie knows she’s living a lie. Then she glimpses Ross as he used to be: playful and passionate, the man of her dreams before ambition changed him. She couldn’t know he’s feeling the same regrets, the same heartache…or that he fears the return of her memory. What will happen when she remembers the reason she fled from him last year? It will take a miracle to send the walls of anger and secrecy tumbling down and reunite the divided couple. But in the small town of Bethlehem, miracles do happen….

I feel like I included this very same story a week ago but according to a search I haven’t. I guess couples broken up and reuniting are a real favorite of holiday stories. 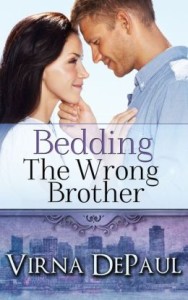 Melina Parker has always excelled in two things: research followed by hands-on application. She prides herself on being a lady in public, but after she’s dumped yet again for being a lady in the bedroom, she’s ready to go back to school. Determined to find her inner sex diva, she enlists her childhood friend, Max Dalton, to tutor her after hours. Instead, she ends up in the wrong bed and gets a lesson in passion from Max’s twin brother, Rhys Dalton, a man Melina’s always secretly wanted but never thought she could have.

Quick read with some eye rolling deep discussions about sex toys per reviews and that the talk about hot sex isn’t met by the love scenes. 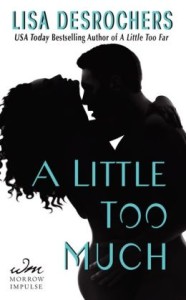 In the follow-up to Lisa Desrochers’ explosive new adult novel A Little Too Far, Alessandro Moretti must face the life he escaped and the girl he left behind.

Twenty-two-year-old Hilary McIntyre would like nothing more than to forget her past. As a teenager abandoned to the system, she faced some pretty dark times. But now that’s all behind her. Hilary has her life on track, and there’s no way she’ll head down that road again.

Until Alessandro Moretti—the one person who can make her remember—shows up on her doorstep. He’s even more devastatingly gorgeous than before, and he’s much too close for comfort. Worse, he sees right through the walls she’s built over these last eight years, right into her heart and the secrets she’s guarding.

As Hilary finds herself falling back in love with the man who, as a boy, both saved and destroyed her, she must decide: Past or future? Truth or lies?

This is the follow up to “A Little Too Far” (on sale for 99c) and even at the low introductory price point of $2.99, the series doesn’t seem to have gained much traction. The hero in this book was the near priest of book 1 and the marginal reviews stem from the lack of Alessandro’s voice in the story. Both are told from the female protags first person point of view and at least one review mentioned that there wasn’t as much romance as she would have liked. 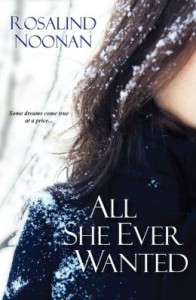 For years, Chelsea Maynard has longed to be a mother. She’s imagined caring for a new baby in the lovely house she shares with her husband, Leo, fondly planning every detail. But after a difficult birth, those dreams of blissful bonding evaporate. Chelsea battles sleep deprivation and feelings of isolation. Little Annabelle cries constantly, and Chelsea has dark visions fueled by exhaustion and self-doubt. Her sister, Emma, insists she gets help for post-partum depression, but Chelsea’s doctor dismisses her worries as self-indulgent.

Doubting her ability to parent—even doubting her own sanity—Chelsea is close to collapse. Then an unthinkable crisis hits. And suddenly, Chelsea is compelled to face both the fragility and resilience of life, and the extraordinary depths of love.

With uncompromising candor and clarity, acclaimed author Rosalind Noonan creates a mesmerizing novel that is gripping, heart-wrenching, and unforgettably poignant.

An interesting look at post partum depression with a kidnapping thrown in.