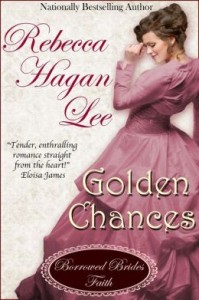 Can you borrow a bride for nine months without her stealing your heart?

A demure member of the Richmond Ladies Sewing Circle, Faith Collins certainly isn’t the type of lady who would answer an advertisement to bear a stranger’s child.

Wealthy Wyoming rancher Reese Jordan isn’t looking for a lady—or a bride. But when the dark-eyed beauty responds to his ad, he cannot resist offering her more than just a contract to provide him with an heir to his fortune.

As they travel west and struggle to guard their wounded hearts, Faith and Reese quickly discover just how easily business can turn to pleasure…and pleasure to love.

Book 1 of the BORROWED BRIDES Series, which includes Golden Chances, Harvest Moon and Something Borrowed

Originally published through Penguin in 1992. I actually might pick this up. It’s a historical but a Western. 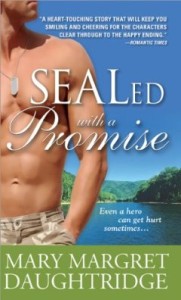 SEALed with a Promise by Mary Margret Daughtridge . $ 2.99

He’ll do anything to move the mission forward, no matter the cost…

Navy SEAL Caleb Delaude is deadly charming. When he discovers that professor Emmie Caddington’s personal connections can help him get the dirty work done, he sets out to win her over. But her quick intelligence and quirky personality sure do start to get under his skin…

She may just be the key to his salvation…

Emmie’s smart and independent and isn’t looking for a brawny guy to take over her life. But this rugged Navy SEAL, who seems so determined to get close to her, hides a fi erce intelligence and deep sensitivity.

When plans go wrong and a child’s life is on the line, Emmie learns what it means to be a SEAL in action, and Caleb discovers that even a hero can get hurt sometimes…

Robin aka Janet reviewed this book and enjoyed it even though Navy SEALs aren’t really her thing. 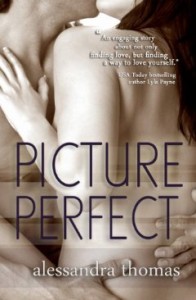 Fashion design major Cat Mitchell has a closet full of gorgeous clothes – and not a single thing fits. After two years of runway modeling for easy cash, an accident shattered her lower leg bone and her self-esteem in just one swift fall. Ten months of no exercise, prescription steroids, comfort eating and yoga pants meant returning to campus as a size twelve instead of her former size two.

When her gorgeous long-time friend with benefits sees her for the first time after her accident and snubs her in front of all her friends, Cat’s self-image hits rock bottom. Her sorority sisters all insist that she looks gorgeous, but all Cat sees is the roll of her stomach when she sits down, or the dimpling at the back of her thighs that wasn’t there last year. Cat’s therapist prescribes something radical to stop the downward spiral – nude modeling for a nearby college’s human form drawing classes.

When Cat faces her fears and bares it all for the class, she realizes that she’s posing naked in front the most gorgeous, buffest guy she’s ever seen in her life. He asks her out after the class, and after one steamy night and six weeks of perfect dates together, Cat’s absolutely smitten.

But when Cat goes home with Nate for Thanksgiving, she discovers something shocking from his recent past that proves that he hasn’t always been so encouraging of women of all shapes and sizes. Cat has no idea what to think, but she does know one thing – this might destroy their relationship before it’s even had a chance to get off the ground.

Before Cat can figure out whether the real Nate is the sensitive, adoring guy she fell in love with, or an undercover asshole, she’ll have to finally feel comfortable in her own skin – even if it means leaving him forever.

This book sounds intriguing but it could easily be terrible given the subject matter. This was a a great review on Amazon that said that the journey between recognizing someone found her attractive to loving herself should have been the focus on the story but wasn’t given enough attention. A corporate takeover, a sexy rival, a potential gold-digger, a marriage of convenience…just another day in the life of a hot CEO.

A Negotiated Marriage by Noelle Adams: Three years into a marriage of convenience, Molly falls for her own husband when sex becomes part of their business arrangement.

Billionaire’s Island Bride by Judy Angelo: During her island vacation, college student Erin ends up blackmailed into marriage with a billionaire bad boy.

Catering to the CEO by Samantha Chase: Cassie is determined to best jaded CEO Adams in a business deal, and the rivalry quickly becomes heated…in more ways than one.

More Than a Kiss by Stacey Joy Netzel: A kiss with Sadie on the set of a commercial sparks the interest of self-made millionaire Zach, until he begins to suspect she’s nothing but a gold-digger.

The Mogul’s Reluctant Bride by Ana E Ross: Rivals Kaya and Bryce will do anything to keep the children they both love—and anything includes getting married.

I’ve posted deals by Noelle Adams aka Claire Kent before. I’ve not read any of the other authors.

→ Jane
Previous article: REVIEW: Turn and Burn by Lorelie James
Next Post: How reading habits shape the publishing landscape and what authors and publishers can do to change it