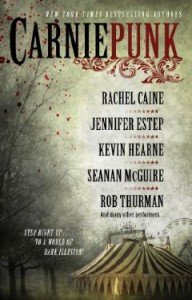 Come one, come all! The Carniepunk Midway promises you every thrill and chill a traveling carnival can provide. But fear not! Urban fantasy’s biggest stars are here to guide you through this strange and dangerous world. . . .

RACHEL CAINE’s vampires aren’t child’s play, as a naïve teen discovers when her heart leads her far, far astray in “The Cold Girl.” With “Parlor Tricks,” JENNIFER ESTEP pits Gin Blanco, the Elemental Assassin, against the Wheel of Death and some dangerously creepy clowns. SEANAN McGUIRE narrates a poignant, ethereal tale of a mysterious carnival that returns to a dangerous town after twenty years in “Daughter of the Midway, the Mermaid, and the Open, Lonely Sea.” KEVIN HEARNE’s Iron Druid and his wisecracking Irish wolfhound discover in “The Demon Barker of Wheat Street” that the impossibly wholesome sounding Kansas Wheat Festival is actually not a healthy place to hang out. With an eerie, unpredictable twist, ROB THURMAN reveals the fate of a psychopath stalking two young carnies in “Painted Love.”

Jia reviewed it and gave the collection a B- overall. 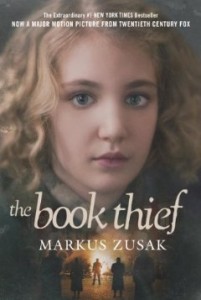 The extraordinary #1 New York Times bestseller that will be in movie theaters on November 15, 2013, Markus Zusak’s unforgettable story is about the ability of books to feed the soul.

It is 1939. Nazi Germany. The country is holding its breath. Death has never been busier, and will become busier still.

Liesel Meminger is a foster girl living outside of Munich, who scratches out a meager existence for herself by stealing when she encounters something she can’t resist–books. With the help of her accordion-playing foster father, she learns to read and shares her stolen books with her neighbors during bombing raids as well as with the Jewish man hidden in her basement.

In superbly crafted writing that burns with intensity, award-winning author Markus Zusak, author of I Am the Messenger, has given us one of the most enduring stories of our time.

School Library Journal says “Zusak not only creates a mesmerizing and original story but also writes with poetic syntax, causing readers to deliberate over phrases and lines, even as the action impels them forward. Death is not a sentimental storyteller, but he does attend to an array of satisfying details, giving Liesels story all the nuances of chance, folly, and fulfilled expectation that it deserves. An extraordinary narrative” 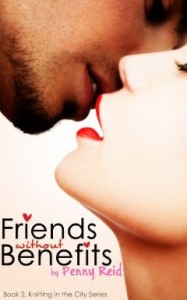 Friends Without Benefits can be read as a standalone, is a full length 120k word novel, and is book #2 in the Knitting in the City Series.

There are three things you need to know about Elizabeth Finney: 1) She suffers from severe sarcastic syndrome, especially when she’s unnerved, 2) No one unnerves her like Nico Manganiello, and 3) She knows how to knit.

Elizabeth Finney is almost always right about everything: the musical merits of boy bands are undervalued by society, “benefits” with human Ken dolls are better without friendship, and the sun has set on her once-in-a-lifetime chance for true love. But when Elizabeth’s plans for benefits without friendship are disarmed by the irritatingly charismatic and chauvinistic Nico Manganiello- her former nemesis- she finds herself struggling to maintain the electric fence around her heart while avoiding electrocution or, worse, falling in love.

Reid wrote this funny book called Neanderthal Seeks Human. The heroine in that book is a high functioning autistic. The heroine in Friends without Benefits is friends with the heroine in Neaderthal Seeks Human. Her one true love died when she was sixteen and Elizabeth is stuck in romantic stasis forever. (or so she believes) Ultimately the lower starred reviews mention this issue as being problematic. Either you buy into that concept or it doesn’t work for you. 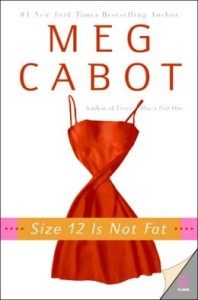 Or, at least, she did. That was before she left the pop-idol life behind after she gained a dress size or two — and lost a boyfriend, a recording contract, and her life savings (when Mom took the money and ran off to Argentina). Now that the glamour and glory days of endless mall appearances are in the past, Heather’s perfectly happy with her new size 12 shape (the average for the American woman!) and her new job as an assistant dorm director at one of New York’s top colleges. That is, until the dead body of a female student from Heather’s residence hall is discovered at the bottom of an elevator shaft.

The cops and the college president are ready to chalk the death off as an accident, the result of reckless youthful mischief. But Heather knows teenage girls . . . and girls do not elevator surf. Yet no one wants to listen — not the police, her colleagues, or the P.I. who owns the brownstone where she lives — even when more students start turning up dead in equally ordinary and subtly sinister ways. So Heather makes the decision to take on yet another new career: as spunky girl detective!

But her new job comes with few benefits, no cheering crowds, and lots of liabilities, some of them potentially fatal. And nothing ticks off a killer more than a portly ex-pop star who’s sticking her nose where it doesn’t belong . . .

This is a fun little series about a Resident Assistant at a NY college. Mixed in with her penchant for solving mysteries is Heather’s struggle with her ex who is becoming famous and her feelings for her ex’s hunky older brother. I enjoyed the ones that I read quite a bit.