Daily Deals: Boxed sets, freebies, a YA retelling of an Agatha Christie mystery, and a western *DUE TO POPULAR DEMAND THIS SPECIAL COLLECTION WILL REMAIN AVAILABLE FOR A SHORT TIME LONGER AT THE AMAZINGLY LOW PRICE OF JUST .99! GET YOURS NOW!

Don’t miss the summer’s best collection of romantic suspense, mysteries and thrillers from masters of the genres!

Chasing Shadows by CJ Lyons
Going undercover, playing the part of a disgraced former Marine, is easy for Chase Westin–until a Christmas Eve mission takes him back to his hometown and face to face with his estranged brother. When KC, an undercover FBI agent, flies into Chase’s life with her Doc Martens, purple, punk-rock hair, and Hollywood-hype leather and chains, Chase realizes that falling in love is more dangerous than catching bullets.

Dirty by Debra Webb
Jackie Mercer can’t abide deception. A woman who single-handedly built the Mercer Detective Agency from the ground up has a right to expect honesty in a relationship. Tell that to the creep who, only this morning, she thought might be Mr. Right. Wrong! Her day only gets worse when an ominous message arrives accompanied by the photo of a man she hasn’t seen in ten years: You were the last one to see him alive. She’s in real trouble when a second message, this one including a dead body, drops into the mix. Jackie does what any smart Texas woman would do: she kicks butt and takes names, while the mystery spiraling around her long lost lover and her attraction to Derrick Dawson plunge her into a tangled web of shocking secrets and deadly deceptions.

Mind Reader by Vicki Hinze
Caron Chalmers is an empath. A mind reader cursed with imaging only victims. She sees what they see, feels what they feel, endures what they endure. But even with all the sensory perception and insights, sometimes she fails to save victims in time. Sometimes she interprets the signs wrong–and a year ago, she did exactly that. She messed up and a victim died. Caron nearly died with her. Her “gift” shut down. Now it’s back. There’s another victim–this time a child–and because of the shut-down, her police contact, though aware of her many successes, isn’t willing to stake his career on her. Yet he can’t dismiss her and calls in help from a private investigator, Parker Simms: a man with a past as bleak as Caron’s and a specific agenda of his own: proving Caron Chalmers is the fraud he believes her to be. In a hostile alliance, Caron and Parker seek the truth . . . and discover a labyrinth of lies and deceptions…

Witch Dance by Peggy Webb
Kate came to Witch Dance to practice medicine. She expected to fall in love with the tribal lands of Oklahoma and its people. She never expected resistance and hostility to her clinic. And she certainly never expected death threats. But something evil is stalking Kate and the Chickasaw children. Only one man can stop the deadly enemy – Eagle Mingo, son of the Chickasaw governor, destined by blood to follow in his father’s footsteps and by fate to fall in love with a forbidden woman. Eagle will do anything to save Kate except shun the traditions that hold him fast to duty. But can he stop the evil spreading through his land and find a killer who calls himself the Avenger? Can he find a way to have the woman of his heart without breaking the heart of a Chickasaw nation?

The Informant by Vr Marks
A dead body is no way to start the day… a fake marriage makes it a special brand of hell.

When her witness is murdered, DEA Agent Hannah Thalberg knows she’s the next target. The only way she can stay close to the case is to lie about getting married and hope her one-time lover goes along with the deception.

5 full length novels and 2 novellas. Lyons, Hinze and D Webb are all authors I’ve read before and are pretty good.

On the golden plains of a new frontier, a smart young schoolteacher teaches a single father a lesson—in the power of love.

Only the boldest of women would set off for the Dakota Territory without a man by her side. But schoolteacher Jana Hartmann is determined to build a new life for herself and her frail sister, Greta. True to her courageous spirit, Jana takes the only job she can find in the town of Bismarck—modeling dresses in a shop window—which has every man staring and every woman gossiping. Adding fuel to the fire, she’s agreed to help raise money in the annual kissing booth, where one handsome cowboy wants to buy every kiss for himself.

Drew Malone is a lawyer, rancher, and father of two little boys. Although Jana is immediately attracted to the handsome and helpful Drew, she fights it, torn between a budding romance and her responsibility to Greta. But Drew persists and sweeps her away for a romantic Christmas at Rimfire Ranch in the Badlands, where Jana finds herself having to win over the toughest critics of all— Drew’s young sons. As Greta becomes more independent, Jana lets down her guard and opens her heart to the three Malone men. But when the boys are kidnapped on her watch, Jana blames herself and flees to the frontier. Drew must race against the clock to get back his sons . . . and to make Jana his Rimfire bride

From the reviews, this book sounds like it is more of a domestic

Get in the bridal spirit with this prequel novella to the fabulous new Harlequin KISS contemporary romance series, The Wedding Season!

Bridal shop owner Amber Davis dreaded the moment she’d run in to Parker Robinson while working on his sister’s wedding. She’d spent every summer in the Hamptons with his family as a kid, fantasizing about kissing him. But she’s shocked to discover that the confident boy who’d given Amber her first taste of love has become a man who mocks its very existence.

Parker can’t believe the girl who used to follow him around has grown into a beautiful woman—one with some very naughty ideas when she fits him for his tux. But Amber also knows why he’s shut everyone out of his life. She’s not the kind of woman Parker gets involved with…even if he can’t keep his hands off her.

Amber doesn’t do one-night stands or casual hookups, but she’s wanted Parker long enough to make him an exception—especially if she can convince him he needs love in his life, too.

Look for all four books in the Wedding Season series from Harlequin KISS: The Unexpected Wedding Guest by Aimee Carson, Girl Least Likely to Marry by Amy Andrews, Maid of Dishonor by Heidi Rice and Last Groom Standing by Kimberly Lang.

Thanks to Kim for the heads up on this one. From the reviews, it sounds like the story is not completed in this volume but that the romance is wrapped up in a second book. The first review on Amazon was from a frustrated reader who really disliked the heroine for trying to force the hero to reconcile with his really awful mother. 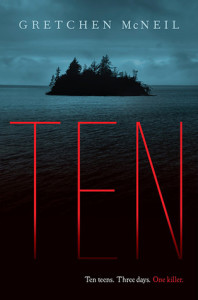 SHHHH!
Don’t spread the word!
Three-day weekend. Party at White Rock House on Henry Island.
You do NOT want to miss it.

It was supposed to be the weekend of their lives—an exclusive house party on Henry Island. Best friends Meg and Minnie each have their reasons for being there (which involve T.J., the school’s most eligible bachelor) and look forward to three glorious days of boys, booze and fun-filled luxury.

But what they expect is definitely not what they get, and what starts out as fun turns dark and twisted after the discovery of a DVD with a sinister message: Vengeance is mine.

Suddenly people are dying, and with a storm raging, the teens are cut off from the outside world. No electricity, no phones, no internet, and a ferry that isn’t scheduled to return for two days. As the deaths become more violent and the teens turn on each other, can Meg find the killer before more people die? Or is the killer closer to her than she could ever imagine?

This is a retelling of Agatha Christie’s Then There Were None. Some people thought the heroine was too much of a martyr but others like the teen version of the murder mystery and said that there was a decent romance in it.