Daily Deals: A YA that is deemed the devil’s work; a sexy PI; and drunk knitters 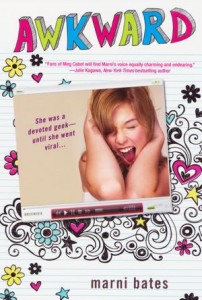 I’m Mackenzie Wellesley, and I’ve spent my life avoiding the spotlight. But that was four million hits ago. . .
Blame it on that grade school ballet recital, when I tripped and pulled the curtain down, only to reveal my father kissing my dance instructor. At Smith High, I’m doing a pretty good job of being the awkward freshman people only notice when they need help with homework. Until I send a burly football player flying with my massive backpack, and make a disastrous–not to mention unwelcome–attempt at CPR. Just when I think it’s time for home schooling, the whole fiasco explodes on Youtube. And then the strangest thing happens. Suddenly, I’m the latest sensation, sucked into a whirlwind of rock stars, paparazzi, and free designer clothes. I even catch the eye of the most popular guy at school. That’s when life gets really interesting. . ..

According to a reviewer at BN.com, this book is “one of the devil’s schemes to poison your mind.” There is apparently cussing and drinking. No sex, though. What a disappointment. Other reviewers say its for fans of Meg Cabot. 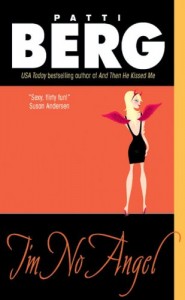 Top 7 Reasons Why She’s No Angel

7. Easily Palm Beach’s sexiest private investigator, Angel Devlin always gets her man — and bad boy millionaire Tom Donovan is at the top of her Most Wanted list.

6. Instinct tells her that drop-dead-gorgeous Tom has something wicked up his sleeve, and she’s going to get up close and personal to find out just what.

5. Her list of nocturnal activities includes lifting a wallet while seductively skimming her hands over her victim’s rock-solid chest and performing a bewitching lap dance at a seedy underground club.

4. There’s nothing sweet or innocent about Angel — she’s as sharp as the steel stiletto she wears strapped to her shapely thigh.

3. Her motto is “dress to thrill.” A tight skirt, a hint of cleavage, and a pair of kick-ass Jimmy Choos will make a man open up and divulge all sorts of little secrets.

2. Angel is devilish, devious, and sexy as sin.

1. She’s the first to admit she’s no angel, but it doesn’t stop Tom from falling head over heels in love with the mischievous blonde.

The reviews for the book are fairly mixed with the most helpful saying that the book was boring which, in the case of a story about a sexy PI, but the positive reviews noted the great chemistry between the characters. It looks like there are hijinks (alligator wrestling) and more serious topics like Alzheimer’s. 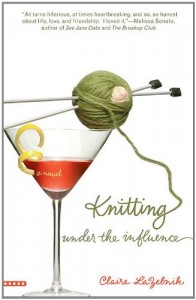 Knitting Under the Influence by Claire LaZebnik. $2.99.

When you’re in your late twenties and nothing in your life seems to be falling into place, knitting is an awfully seductive way to spend your free time. After all, as long as you’re following the instructions, you can knit row after row with the knowledge that the pattern will emerge and you’ll end up with just what you wanted. Life, on the other hand, doesn’t come with a stitch counter, so Kathleen, Sari, and Lucy, the heroines of KNITTING UNDER THE INFLUENCE, just have to figure things out as they go along.

Their weekly Sunday knitting circle is the only thing holding them together as Kathleen is cut off financially by her family and forced to enter `the real world’ for the very first time at the age of twenty-seven, Sari finds herself falling for the man who made her life a living hell in high school but who now desperately needs her help, and Lucy finds herself torn between emotion and reason when her lab and her boyfriend are assailed by an animal-rights group.

At their club meetings, they discuss the really important questions: how bad is it, really, to marry for money if you like the guy a lot anyway? Can you ever forgive someone for something truly atrocious that they’ve done? Is it better to be unhappily coupled than happily alone? And the little ones: Can you wear a bra with a hand-knit tube top? Is it ever acceptable to knit something for a boyfriend? And why do your stitches become lopsided after your second martini?
In Claire LaZebnik’s hilarious and sometimes heartbreaking novel, Sari, Lucy, and Kathleen’s lives intersect, overlap, unravel, and come back together-the result is an utterly satisfying read.

There are some readers of Dear Author who are members of Ravelry, one of the largest community sites on the internet and it’s a site devoted to yarn enthusiasts, mostly knitters. Someday, when I have more time, I’m going to learn how to knit. That said, it sounds like avid knitters were disappointed by the lack of actual knitting patterns and, as one reviewer put it, “shallow and crass” dialogue. 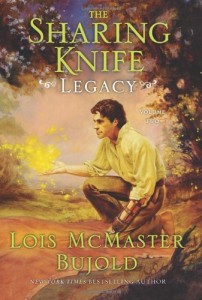 Fawn Bluefield, the clever young farmer girl, and Dag Redwing Hickory, the seasoned Lakewalker soldier-sorcerer, have been married all of two hours when they depart her family’s farm for Dag’s home at Hickory Lake Camp. Having gained a hesitant acceptance from Fawn’s family for their unlikely marriage, the couple hopes to find a similar reception among Dag’s Lakewalker kin. But their arrival is met with prejudice and suspicion, setting many in the camp against them, including Dag’s own mother and brother. A faction of Hickory Lake Camp, denying the literal bond between Dag and Fawn, woven in blood in the Lakewalker magical way, even goes so far as to threaten permanent exile for Dag.

Before their fate as a couple is decided, however, Dag is called away by an unexpected—and viciously magical—malice attack on a neighboring hinterland threatening Lakewalkers and farmers both. What his patrol discovers there will not only change Dag and his new bride, but will call into question the uneasy relationship between their peoples—and may even offer a glimmer of hope for a less divided future.

Filled with heroic deeds, wondrous magic, and rich, all-too-human characters, The Sharing Knife: Legacy is at once a gripping adventure and a poignant romance from one of the most imaginative and thoughtful writers in fantasy today.