Daily Deals: Anti heroes from Germany to the deep South 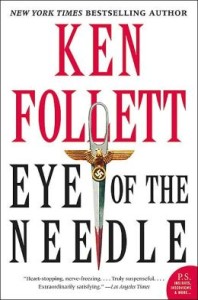 One enemy spy knows the secret to the Allies’ greatest deception, a brilliant aristocrat and ruthless assassin — code name: “The Needle” — who holds the key to ultimate Nazi victory.

Only one person stands in his way: a lonely Englishwoman on an isolated island, who is beginning to love the killer who has mysteriously entered her life.

All will come to a terrifying conclusion in Ken Follett’s unsurpassed and unforgettable masterwork of suspense, intrigue, and the dangerous machinations of the human heart.

This P.S. edition features an extra 16 pages of insights into the book, including author interviews, recommended reading, and more.

This is a WWII thriller and I wonder if Jayne would like it. There is even some kind of love story included. But the story centers around a German Spy master called “The Needle” and his mission to discover the D-Day invasion plans.

Of course, given that The Needle is the antagonist and his love interest is an Englishwoman, the love part of this story might be super tragic. 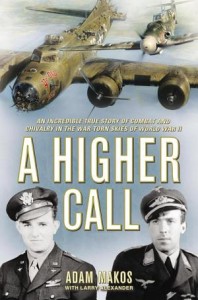 Four days before Christmas 1943, a badly damaged American bomber struggled to fly over wartime Germany. At its controls was a 21-year-old pilot. Half his crew lay wounded or dead. It was their first mission. Suddenly, a sleek, dark shape pulled up on the bomber’s tail—a German Messerschmitt fighter. Worse, the German pilot was an ace, a man able to destroy the American bomber in the squeeze of a trigger. What happened next would defy imagination and later be called the most incredible encounter between enemies in World War II.

This is the true story of the two pilots whose lives collided in the skies that day—the American—2nd Lieutenant Charlie Brown, a former farm boy from West Virginia who came to captain a B-17—and the German—2nd Lieutenant Franz Stigler, a former airline pilot from Bavaria who sought to avoid fighting in World War II.

A Higher Call follows both Charlie and Franz’s harrowing missions. Charlie would face takeoffs in English fog over the flaming wreckage of his buddies’ planes, flak bursts so close they would light his cockpit, and packs of enemy fighters that would circle his plane like sharks. Franz would face sandstorms in the desert, a crash alone at sea, and the spectacle of 1,000 bombers each with eleven guns, waiting for his attack.

Ultimately, Charlie and Franz would stare across the frozen skies at one another. What happened between them, the American 8th Air Force would later classify as “top secret.” It was an act that Franz could never mention or else face a firing squad. It was the encounter that would haunt both Charlie and Franz for
forty years until, as old men, they would search for one another, a last mission that could change their lives forever.

The Google Play book pages appear to be redesigned. This book is of note (as was the John Green book yesterday) because they were both Penguin books! Maybe we’ll see regularly discounting of one or two books each day? 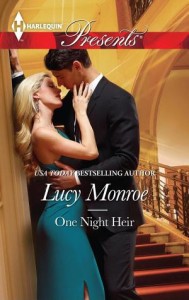 Only a royal wedding…
Bitter life lessons have taught Crown Prince Maksim Yurkovich that duty must come before desire. His country needs an heir, so when he discovers his lover can’t have children, he must sever their ties. Only Maks can’t resist spending one last night in her bed.

…can avert this royal scandal!
Now he faces the biggest diplomatic crisis of his life. Against all odds, Gillian Harris has become pregnant. Maks’s royal reserve masks the heart of a fierce Cossack warrior—one who is not above using their mutual passion to convince a hurt, wary Gillian that she must be his queen!

This sounds particularly angsty. The reviews indicate the conflict is that Maksim keeps pushing Gillian to marry him when first he didn’t think she was good enough (because fertility) and then because he doesn’t love her and she feels the emotional imbalance in their relationship would be cancerous. 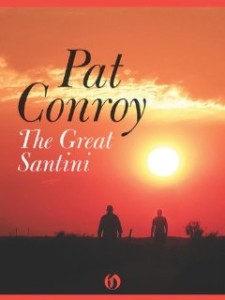 Step into the powerhouse life of Bull Meecham. He’s all Marine—fighter pilot, king of the clouds, and absolute ruler of his family. Lillian is his wife—beautiful, southern-bred, with a core of velvet steel. Without her cool head, her kids would be in real trouble. Ben is the oldest, a born athlete whose best never satisfies the big man. Ben’s got to stand up, even fight back, against a father who doesn’t give in—not to his men, not to his wife, and certainly not to his son. Bull Meecham is undoubtedly Pat Conroy’s most explosive character—a man you should hate, but a man you will love.

Per the reviews, Bull Meecham is an anti hero. An abusive father who inspires both love and hatred in those around him. His kids are the overachieving son and smartass daughter. Neither get the parental approval they desire. One reader said “In the early chapters its made clear why this maverick fighter pilot is hated but as the story continues, and despite the man’s unchanging nature, the reader’s perception changes; until, by the end, you do understand the love his children bear him. It might be Stockholm syndrome, it might be genetics and the biological imperative, it might just be conforming to outsiders expectations”