Avon’s new discount are titles with the word Scandal or Scandalous. The Amazon List

can be viewed here. 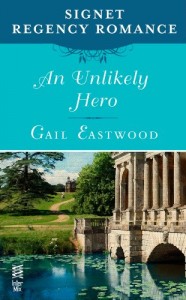 The twin daughters of the Duke of Roxley have beauty, brains, wealth and rank, but they refuse offers of marriage and test all their suitors beyond limits. Badgered into attending a house party at the Duke’s palatial estate, scholar Gilbey Kentwell, the Viscount Cranford, has agreed to help look out for his best friend’s sisters, knowing he is no candidate for their hands. But when he learns the secret they are hiding, and then finds they are threatened by a blackmailer, he asks himself: What’s a hero to do? Can he help them without losing his heart?

The hero is a scholar (albeit with a title) but I’ve always had a soft spot for scholars. There are three five star reviews on Amazon, one written by Annette Blair, the author, who has rated several Signet Regencies five stars, and one from Centreville Savings Bank. I’m not kidding. Click on the Amazon link to see.

For some reason, Kobo does not have this book for sale. 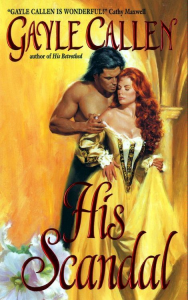 Lady Emmeline Prescott is shocked when Sir Alexander Thornton, the most incorrigible scoundrel in England, suddenly notices she even exists-and starts flirting with her! The dashing cad has a well-earned reputation for carousing that brings a blush to checks, but more distressing still I is the unwanted desire he arouses in her!

To win a wager, Alex must win a kiss from an innocent maiden, But first he must get past the giggly girl’s chaperone-her straitlaced older sister, Lady Emmeline. And to his dismay, it is the enchanting, levelheaded Emmeline who intoxicates him with her soft sensuality and eminently kissable lips. Yet such a conquest is unthinkable-unless Alex abandons his cherished reprobate ways… and surrenders to his heart’s traitorous yearning for a true and passionate love.

This title has several four star reviews from seeming impartial reviewers. It is the second book in Callen’s “His” series. 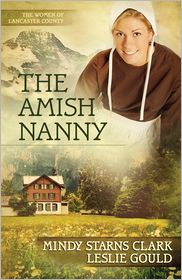 Bestselling author Mindy Starns Clark and coauthor Leslie Gould offer readers The Amish Nanny, Book 2 in the Women of Lancaster County series, which tells the stories of young Plain women as they explore their roots, connect with family, and discover true love.

Amish-raised Ada Rupp knows it’s time to make a commitment to the faith and join the church, especially if she wants a future with the handsome Amish widower Will Gundy.

But when she has the chance to travel to Switzerland as the caregiver of a young child, she leaps at the opportunity.

Anxious to learn more about her forebears, Ada enlists the help of a young Mennonite scholar named Daniel, but even as she develops feelings for him, she cannot get Will from her mind—or her heart. At a crossroads, Ada must decide what she is willing to give up from the past in order to embrace her future.

I’m not sure DA’s readership is interested, but it is a good deal. The ebook is regularly priced at $13.99. These stories are very popular. Currently the deal looks to be Amazon specific although it is only $2.99 at Kobobooks as well. 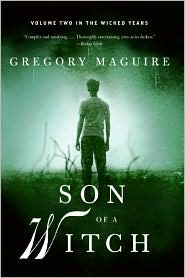 When a Witch dies-not as a crone, withered and incapable, but as a woman in her prime, at the height of her passion and prowess-too much is left unsaid. What might have happened had Elphaba lived? Of her campaigns in defense of the Animals, of her appetite for justice, of her talent for magic itself, what good might have come? If every death is a tragedy, the death of a woman in her prime keenly bereaves the whole world. Ten years after the publication of Wicked, bestselling novelist Gregory Maguire returns to the land of Oz to follow the story of Liir, the adolescent boy left hiding in the shadows of the castle when Dorothy did in the Witch.

A decade after the Witch has melted away, the young man Liir is discovered bruised, comatose, and left for dead in a gully. Shattered in spirit as well as in form, he is tended by the mysterious Candle, a foundling in her own right, until failed campaigns of his childhood bear late, unexpected fruit.

Liir is only one part of the world that Elphaba left behind. As a boy hardly in his teens, he is asked to help the needy in ways in which he may be unskilled. Is he Elphaba’s son? Has he power of his own? Can he

liberate Princess Nastoya into a dignified death? Can he locate his supposed half-sister, Nor, last seen in shackles in the Wizard’s protection? Can he survive in an Oz little improved since the death of the Wicked Witch of the West? Can he learn to fly?

In Son of a Witch, Gregory Maguire suggests that the magic we locate in distant, improbable places like Oz is no greater than the magic inherent in any hard life lived fully, son of a witch or no.

This looked like a cool story. I haven’t read Maguire but I know his Witch stories are quite popular.