Daily Deals: An iconic young adult; a Terry Pratchett novel (he’s kind of an icon); a Pulitzer Prize non fiction novel (the prize is an icon) and a box set (not an icon)

Before we start, the UK Amazon had dropped the price on Angel’s Blood, the first Guild Hunter book. It’s 99 pounds (I can’t make the pound sign on my laptop keyboard). Link here. 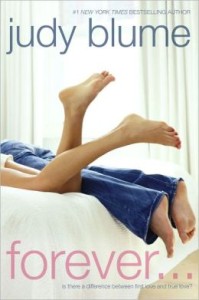 When you build up something in your mind—really imagine it, wish for it—sometimes, when it actually happens, it doesn’t live up to your expectations.

Especially not for Katherine and Michael, who can’t get enough of each other. Their relationship is unique: sincere, intense, and fun all at the same time. Although they haven’t been together all that long, they know it’s serious. A whole world opens up as young passion and sexuality bloom.

But it’s senior year of high school, and there are big changes ahead. Michael and Katherine are destined for another big “first”: a decision. Is this the love of a lifetime, or the very beginning of a lifetime of love?

“No preaching (Blume never does) but the message is clear; no hedging (Blume never does) but a candid account by Kathy gives intimate details of a first sexual relationship. The characters and dialogue are equally natural and vigorous, the language uncensored, the depiction of family relationships outstanding.”–Bulletin of the Center for Children’s Books. ALA Best of the Best Books for Young Adults.

Apparently the sex in this book is descriptive. I think it was on a banned book list. I’ve not read this book but I’m assuming that it doesn’t end with Katherine and Michael living happily ever after. 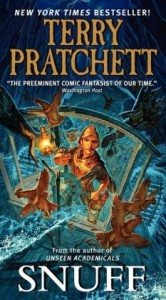 At long last, Lady Sybil has lured her husband, Sam Vimes, on a well-deserved holiday away from the crime and grime of Ankh-Morpork. But for the commander of the City Watch, a vacation in the country is anything but relaxing. The balls, the teas, the muck—not to mention all that fresh air and birdsong—are more than a bit taxing on a cynical city-born and -bred copper.

Yet a policeman will find a crime anywhere if he decides to look hard enough, and it’s not long before a body is discovered, and Sam—out of his jurisdiction, out of his element, and out of bacon sandwiches (thanks to his well-meaning wife)—must rely on his instincts, guile, and street smarts to see justice done. As he sets off on the chase, though, he must remember to watch where he steps. . . . This is the countryside, after all, and the streets most definitely are not paved with gold.

Um, it’s Terry Pratchett. I don’t have a lot to write in this little box other than my guess is if you like Pratchett, you’ll like this one? 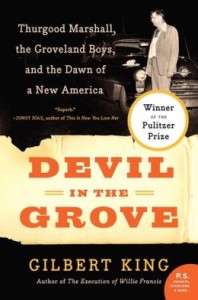 Devil in the Grove: Thurgood Marshall, the Groveland Boys, and the Dawn of a New America by Gilbert King. $ 2.99

Devil in the Grove is the winner of the 2013 Pulitzer Prize for General Nonfiction.

Arguably the most important American lawyer of the twentieth century, Thurgood Marshall was on the verge of bringing the landmark suit Brown v. Board of Education before the U.S. Supreme Court when he became embroiled in an explosive and deadly case that threatened to change the course of the civil rights movement and cost him his life.

In 1949, Florida’s orange industry was booming, and citrus barons got rich on the backs of cheap Jim Crow labor. To maintain order and profits, they turned to Willis V. McCall, a violent sheriff who ruled Lake County with murderous resolve. When a white seventeen-year-old Groveland girl cried rape, McCall was fast on the trail of four young blacks who dared to envision a future for themselves beyond the citrus groves. By day’s end, the Ku Klux Klan had rolled into town, burning the homes of blacks to the ground and chasing hundreds into the swamps, hell-bent on lynching the young men who came to be known as “the Groveland Boys.”

And so began the chain of events that would bring Thurgood Marshall, the man known as “Mr. Civil Rights,” into the deadly fray. Associates thought it was suicidal for him to wade into the “Florida Terror” at a time when he was irreplaceable to the burgeoning civil rights movement, but the lawyer would not shrink from the fight—not after the Klan had murdered one of Marshall’s NAACP associates involved with the case and Marshall had endured continual threats that he would be next.

Drawing on a wealth of never-before-published material, including the FBI’s unredacted Groveland case files, as well as unprecedented access to the NAACP’s Legal Defense Fund files, King shines new light on this remarkable civil rights crusader, setting his rich and driving narrative against the heroic backdrop of a case that U.S. Supreme Court justice Robert Jackson decried as “one of the best examples of one of the worst menaces to American justice.”

Winner of the 2013 Pulitzer Prize for General Nonfiction

This is like the third Pulitzer Prize winner on sale in the last two weeks. That seems like a lot. On sale! Regularly priced at $9.99! Six sexy, exciting, laugh-out-loud books from some of the top names in paranormal romance:

Dive into this six-in-one boxed set and meet six charming heroines who are fighting to find true love in a world full of magic. There’s an empath who meets a ghost in her shower. An unsuspecting demon-slayer who juggles her supernatural career with the demands of a handsome shape-shifting griffin. A demon-fighting soccer mom fighting to keep the suburbs safe and her superhero career secret. A librarian who discovers she’s a witch when she awakens her familiar by accident, incurring the wrath of her sexy astral protector . A matchmaker for werewolves who may have finally found true love for herself. A witch who tries to balance the jumbled politics of elves, half-elves, and fae, even as she uncovers her forgotten past. Six different heroines, for six times the charm!

Jayne was/is a fan of the Carpe Demon book so it’s probably worth the bundle for that book alone. I will note that four of these books have been free in the past.