Daily Deals: A selection of romances, different and cheap

Kobo is having a Boxing Week sale

For those in US and Canada, the prices have already been reduced at Kobo. 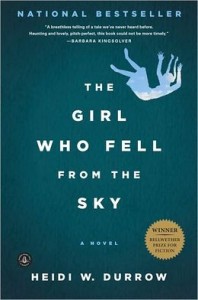 Rachel, the daughter of a danish mother and a black G.I., becomes the sole survivor of a family tragedy after a fateful morning on their Chicago rooftop.

Forced to move to a new city, with her strict African American grandmother as her guardian, Rachel is thrust for the first time into a mostly black community, where her light brown skin, blue eyes, and beauty bring a constant stream of attention her way. It’s there, as she grows up and tries to swallow her grief, that she comes to understand how the mystery and tragedy of her mother might be connected to her own uncertain identity.

This searing and heartwrenching portrait of a young biracial girl dealing with society’s ideas of race and class is the winner of the Bellwether Prize for best fiction manuscript addressing issues of social justice.

From the Washington Post “Durrow’s novel is an auspicious debut, winner of the Bellwether Prize for socially conscious fiction. She has crafted a modern story about identity and survival, although some of the elements come together a little too neatly. Still, this is a fresh approach to an old idea. The Girl Who Fell From the Sky is not just a tale of racial ambiguity but a human tragedy.” 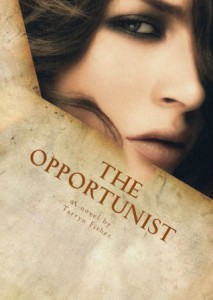 The Opportunist by Tarryn Fisher. $ .99

Olivia Kaspen is a sharp tongued manipulator used to always getting what she wants. With just one exception-Caleb Drake, the one she foolishly let slip away. After a chance encounter brings Caleb back into her life, Olivia finds herself wanting a second chance with her first love, and asking herself how far she is willing to go to get him back. Her only problem is a red head named Leah, Caleb’s new love. Olivia must fight for what was once hers, and in the process discover that sometimes love falls short of redemption.

The blurb has always made me leery of reading this book even though it is a highly recommended self published book. Plus, the end is a cliffhanger but it sounds like a challenging character that the author wrote, different from what you might see in many books. 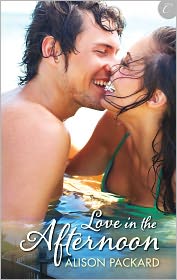 Love in the Afternoon by Alison Packard. $ 1.99

Kayla Maxwell is eager to shed her slasher-flick bimbo image—and she plans to do just that in her new role on daytime’s most popular soap. With a chance to showcase her dramatic range, Kayla will be able to wash away the lingering betrayal and public humiliation left by her controlling, philandering ex-boyfriend.

Sean Barrett, the son of an influential, award-winning actor, is the hottest soap star in the country. Paired on-screen with the talented and beautiful Kayla Maxwell, Sean is determined to keep her at arm’s length, burned before by fame-seeking actresses who had no qualms about using him to get to his famous father.

But when Kayla receives threatening letters, her past as a scream queen seems to be coming back to haunt her. Succumbing to an attraction neither one of them can deny, Sean and Kayla must face down her stalker and their own personal demons before trusting what they both feel—a love that lasts long after the cameras stop rolling.

Sunita gave this book a B-

The romance between Sean and Kayla develops slowly; they get to know each other, as does the reader, and the supporting characters are well integrated into Sean and Kayla’s lives. Sean’s friendship with Matt helps to create a richer context for his character, and I liked the backstory details, like the reason each drove a vintage car. When Sean and Kayla finally get together, the sex is steamy, but it’s also romantic, and we know them as people, not just hero and heroine. 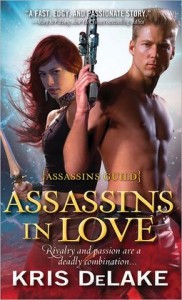 When one killer falls for another

Agent: Misha
Profile: Highly trained in every method the assassins guild has to offer. Always goes by the book.

Agent: Rikki
Profile: Rogue assassin who kills only to rid the world of hardened criminals. Hates organizations. Always does it her way.
Love becomes a matter of life and death

Misha’s mission is to get Rikki to join the guild or give up her guns. He completely underestimated the effect she would have on him…and what heat and chaos they could bring to each other…

I always want to like these Mr and Mrs Smith novels but they rarely work for me.  Has anyone read this?

Just A Kiss Away by Jill Barnett. $Free at Amazon.

Arriving on a lush Pacific island, Eulalie Grace LaRue was soon to be reunited with the father she hadn’t seen since childhood. Yet before Lollie’s dreamed-of meeting could take place, the lovely Southern belle was caught in the crossfire of a violent revolution — and thrown into the rugged arms of Sam Forester.

On the run in the jungle, the battle-scarred soldier of fortune didn’t know what to do with the pampered blonde placed in his care. Survival was his top priority, but he could not resist Lollie’s seductive charm…or deny the growing attraction between them. Though Sam thrived on chance and risk, falling in love was the one chance he wasn’t willing to take.

Powerless against the desire that consumed them both, Lollie surrendered to his passionate embrace. But when he dismissed her affections, she was determined to fight for him…

First published by Pocket Books in 1992, it received the RT Reviewers’ Choice in “Historical Love and Laughter. The cover from that time period is fantastic and I’ve used it here.

→ Jane
Previous article: What Jayne’s Been Reading and Watching Recently
Next Post: New Adult: It’s not about the sex (but don’t be afraid of the sex either)