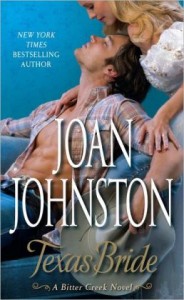 HE MAY BE HER ONLY HOPE.
SHE MAY BE HIS LAST CHANCE.

Miranda Wentworth never imagined becoming a mail-order bride. Now marriage to a stranger is her only hope of finding a home where she and her two younger brothers can escape the brutality of the Chicago orphanage where they live. With any luck, she can even start a family of her own, once the three of them are settled at Jacob Creed’s Texas ranch. But Miranda has one gigantic concern: Her husband-to-be knows nothing about the brothers she’s bringing along. What if he calls off the deal when he discovers the trick she’s played on him?

Jake Creed is hanging on to his Texas ranch by his fingernails. His nemesis, Alexander Blackthorne, is determined to ruin him. Jake will never give up, but he’s in desperate trouble. His wife died six months ago in childbirth, along with their stillborn son, and his two-year-old daughter needs a mother. The advertisement Jake wrote never mentioned his daughter—or the fact that he has no intention of consummating his marriage. He’s determined never to subject another wife to the burden of pregnancy. But Jake doesn’t count on finding his bride so desirable. He doesn’t count on aching with need when she joins him in bed. And he never suspected his bride would have plans of her own to seduce him.

Okay, unlike yesterday’s mistake, this is a real Western. Yesterday’s book took place in Westen OH. :(

In any event, PW says “The attraction between the newlyweds creates romantic tension, but the characters lack dimension, and the story is satisfying but never quite captivating.” 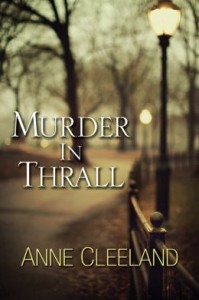 From Anne Cleeland comes the first in a captivating new mystery series, following the perilous exploits of two Scotland Yard detectives as they track down London’s most elusive killer. . .

First-year detective Kathleen Doyle and Chief Inspector Michael Sinclair, Lord Acton, are a most unlikely pair. An Irish redhead of humble beginnings and modest means, Doyle is the antithesis of Acton, the British lord who has established himself as a brilliant but enigmatic figure with a knack for solving London’s most high profile homicides. But Acton senses something exceptional beneath Doyle’s awkward naiveté and taps her to help him with his investigations. And her spot-on intuition is just what he needs to solve a chilling string of murders. . .

When a horse trainer is found dead at a racetrack, Doyle and Acton begin interviewing witnesses and the victim’s associates, but the killer continues to strike and they’re left with more questions than answers. Their investigation is further muddled by their colleagues at CID Headquarters, whose career-driven jealousies and workplace blunders could jeopardize the case—and their nosing into the nature of Doyle and Acton’s after hours relationship could lay bare the most classified information of all. . .

Perhaps the trainer was the target of a jilted lover on a killing spree. Or maybe the victims were collateral damage in a political coup gone awry. As the murders pile up, Doyle and Acton uncover something far more sadistic than they could have imagined, and now that they know too much, they’ll find themselves squarely in the crosshairs of a cold-blooded killer. . .

From the reviews, it sounds like the the heroine is being stalked but you may be surprised as to who the stalker is. You may also be irritated with the heroine’s innocence. But romance readers might find the book appealing. 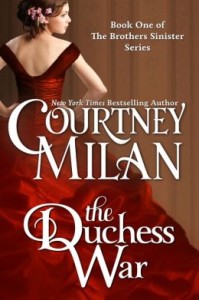 The Duchess War by Courtney Milan. $ .99

Miss Minerva Lane is a quiet, bespectacled wallflower, and she wants to keep it that way. After all, the last time she was the center of attention, it ended badly–so badly that she changed her name to escape her scandalous past. Wallflowers may not be the prettiest of blooms, but at least they don’t get trampled. So when a handsome duke comes to town, the last thing she wants is his attention.

But that is precisely what she gets.

Because Robert Blaisdell, the Duke of Clermont, is not fooled. When Minnie figures out what he’s up to, he realizes there is more to her than her spectacles and her quiet ways. And he’s determined to lay her every secret bare before she can discover his. But this time, one shy miss may prove to be more than his match…

The books in the Brothers Sinister series:
½. The Governess Affair (prequel novella)
1. The Duchess War
1½. A Kiss for Midwinter (a companion novella to The Duchess War)
2. The Heiress Effect

Dark waters are rising. Who will stay afloat?

Architect Vance Nolan has crafted a marvel—shining apartments floating in the peaceful cove of a winding river. The project is partially occupied and about to make investors rich when a sinkhole gives way.

Torrential rains quickly flood the cove, leaving a handful of builders, investors, and residents cut off from the rest of the world.

The motley group is bitterly divided over how to survive.

Vance insists they wait for rescue. Developer Tony Dean wants to strike out into the darkness. And single-mom Danielle Clement, obligated to each man and desperate to protect her young son, Simeon, isn’t sure which one is wiser.

In this watery world, everyone’s secrets will eventually come to light. And deliverance may mean more than just getting out alive.

Another stunning exploration of the human spirit and supernatural possibilities from best-selling author Erin Healy.

PW says “There’s reference to, but not description of, sex in this Christian novel, along with deep faith insights and supernatural armor around some characters. The writing is vivid and smart: “Vance felt like a tarnished penny tucked into a tall stack of crisp new Benjamins.”