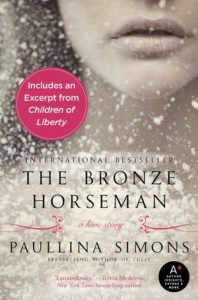 The Bronze Horseman with Bonus Material by Paullina Simons. $ 1.99

See how it all began . . . The golden skies, the translucent twilight, the white nights, all hold the promise of youth, of love, of eternal renewal. The war has not yet touched this city of fallen grandeur, or the lives of two sisters, Tatiana and Dasha Metanova, who share a single room in a cramped apartment with their brother and parents. Their world is turned upside down when Hitler’s armies attack Russia and begin their unstoppable blitz to Leningrad.

Yet there is light in the darkness. Tatiana meets Alexander, a brave young officer in the Red Army. Strong and self-confident, yet guarding a mysterious and troubled past, he is drawn to Tatiana—and she to him. Starvation, desperation, and fear soon grip their city during the terrible winter of the merciless German siege. Tatiana and Alexander’s impossible love threatens to tear the Metanova family apart and expose the dangerous secret Alexander so carefully protects—a secret as devastating as the war itself—as the lovers are swept up in the brutal tides that will change the world and their lives forever.

This is an epic romance and you have to read Tatiana and Alexander to get the HEA. It’s a long book and the couple endures unspeakable separations but I remember reading this when I was on vacation and I could not stop reading it. Keishon, the AvidbookReader, was the one who encouraged me to read this book and I will always love her for it. This is her review.

Note. This is a pre order. 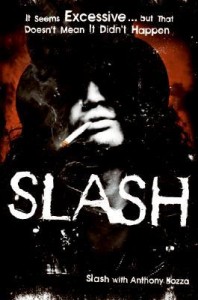 From one of the greatest rock guitarists of our era comes a memoir that redefines sex, drugs, and rock ‘n’ roll

He was born in England but reared in L.A., surrounded by the leading artists of the day amidst the vibrant hotbed of music and culture that was the early seventies. Slash spent his adolescence on the streets of Hollywood, discovering drugs, drinking, rock music, and girls, all while achieving notable status as a BMX rider. But everything changed in his world the day he first held the beat-up one-string guitar his grandmother had discarded in a closet.

The instrument became his voice and it triggered a lifelong passion that made everything else irrelevant. As soon as he could string chords and a solo together, Slash wanted to be in a band and sought out friends with similar interests. His closest friend, Steven Adler, proved to be a conspirator for the long haul. As hairmetal bands exploded onto the L.A. scene and topped the charts, Slash sought his niche and a band that suited his raw and gritty sensibility.

He found salvation in the form of four young men of equal mind: Axl Rose, Izzy Stradlin, Steven Adler, and Duff McKagan. Together they became Guns N’ Roses, one of the greatest rock ‘n’ roll bands of all time. Dirty, volatile, and as authentic as the streets that weaned them, they fought their way to the top with groundbreaking albums such as the iconic Appetite for Destruction and Use Your Illusion I and II.

Here, for the first time ever, Slash tells the tale that has yet to be told from the inside: how the band came together, how they wrote the music that defined an era, how they survived insane, never-ending tours, how they survived themselves, and, ultimately, how it all fell apart. This is a window onto the world of the notoriously private guitarist and a seat on the roller-coaster ride that was one of history’s greatest rock ‘n’ roll machines, always on the edge of self-destruction, even at the pinnacle of its success. This is a candid recollection and reflection of Slash’s friendships past and present, from easygoing Izzy to ever-steady Duff to wild-child Steven and complicated Axl.

It is also an intensely personal account of struggle and triumph: as Guns N’ Roses journeyed to the top, Slash battled his demons, escaping the overwhelming reality with women, heroin, coke, crack, vodka, and whatever else came along.

He survived it all: lawsuits, rehab, riots, notoriety, debauchery, and destruction, and ultimately found his creative evolution. From Slash’s Snakepit to his current band, the massively successful Velvet Revolver, Slash found an even keel by sticking to his guns.

Slash is everything the man, the myth, the legend, inspires: it’s funny, honest, inspiring, jaw-dropping . . . and, in a word, excessive.

HarperCollins is discounting a number of rock star autobiographies. My girlfriend (married to a musician herself) thought this was a stellar memoir. For some reason I can’t find it on BN but it is at Kobo. 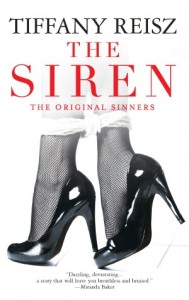 Notorious Nora Sutherlin is famous for her delicious works of erotica, each one more popular with readers than the last. But her latest manuscript is different—more serious, more personal—and she’s sure it’ll be her breakout book?if it ever sees the light of day.

Zachary Easton holds Nora’s fate in his well-manicured hands. The demanding British editor agrees to handle the book on one condition: he wants complete control. Nora must rewrite the entire novel to his exacting standards—in six weeks—or it’s no deal.

Nora’s grueling writing sessions with Zach are draining?and shockingly arousing. And a dangerous former lover has her wondering which is more torturous—staying away from him?or returning to his bed?

Nora thought she knew everything about being pushed to your limits. But in a world where passion is pain, nothing is ever that simple. 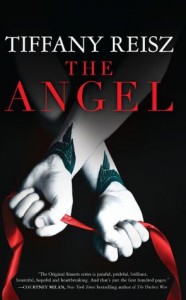 No safe word can protect the heart

Her host, the wealthy and uninhibited Griffin Fiske, is thrilled to have Nora stay at his country estate, especially once he meets her traveling companion. Young, inexperienced and angelically beautiful, Michael has become Nora’s protégé, and this summer with Griffin is going to be his training, where the hazing never ends.

But while her flesh is willing, Nora’s mind is wandering. To thoughts of Søren, her master, under investigation by a journalist with an ax to grind. And to another man from Nora’s past, whose hold on her is less bruising, but whose secrets are no less painful. It’s a summer that will prove the old adage: love hurts.