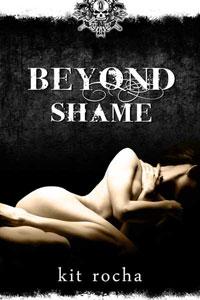 All Noelle Cunningham has ever wanted is a life beyond–beyond the walls of Eden, where only the righteous are allowed to remain, and beyond her stiflingly restrictive existence as a councilman’s daughter. But only ruins lie outside the City, remnants of a society destroyed by solar storms decades earlier.

The sectors surrounding Eden house the corrupt, the criminal–men like Jasper McCray, bootlegger and cage fighter. Jas clawed his way up from nothing to stand at the right hand of Sector Four’s ruthless leader, and he’ll defend the O’Kane gang with his life. But no fight ever prepared him for the exiled City girl who falls at his feet.

Her innocence is undeniable, but so is their intense sexual attraction, and soon they’re crossing every boundary Noelle barely knew she had. But if she wants to belong to Jas, first she’ll have to open herself to the gang, to a dangerous world of sex, lust and violence. A world where passion is power, and freedom is found in submission. 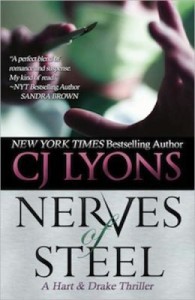 NERVES OF STEEL, Hart and Drake Book #1?
Dr. Cassandra Hart is fighting a war. And losing. ?

A deadly drug epidemic, a killer stalking her hospital…meet the ER doctor who never gives up.

Cassie’s Pittsburgh ER has been deluged by young patients who have overdosed on a new drug, FX. After Cassie discovers that the source of the FX on the streets is her own hospital, her best friend is killed, and Cassie’s life is threatened. She is forced to place her trust in Detective Mickey Drake. ?

Drake’s irascible charm eventually penetrates the barriers Cassie has built around herself, and their relationship progresses from professional to passionate. After Cassie discovers the truth behind the thefts, she and Drake must confront a killer. In the end, their only weapons are their new found love and the courage that it gives them.

There are two versions of this book at BN and Amazon so make sure you are buying the correct one at $2.99. Lyons first wrote medical romances for Berkley and then went on to self publishing success with romantic suspense. She signed a contract with Macmillan but continues to release self published books. I’ve not read her. Medical romances don’t hold a lot of appeal for me. 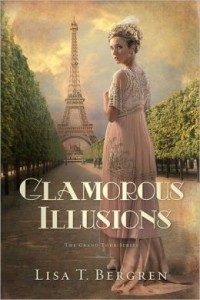 When Cora Kensington learns she is the illegitimate daughter of a copper king, her life changes forever. Even as she explores Europe with her new family, she discovers that the most valuable journey is within. The first book in the Grand Tour series takes you from the farms of Montana through England and France on an adventure of forgiveness, spiritual awakening, and self-discovery.

This is published by an inspirational publishing house but one reviewer at BN said that she didn’t find Bergren to be preachy. 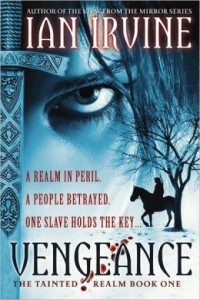 Ten years ago, two children witnessed a murder that still haunts them as adults.

Rix, heir to Hightspall’s greatest fortune, is tormented by the fear that he’s linked to the murder, and by a sickening nightmare that he’s doomed to repeat it.

When a chance meeting brings Tali and Rix together, the secrets of an entire kingdom are uncovered and a villain out of legend returns to throw the land into chaos. Tali and Rix must learn to trust each other and find a way to save the realm — and themselves.

PW write “Although Irvine tells a satisfying story, the pacing is uneven, detailing Tali’s ordeals in slavery and her friends’ bickering at exhaustive length while spending little time on the book’s climactic scenes. The epic fantasy jarringly switches gears for a fight with a naked shape-shifter, used as an excuse for out-of-place juvenile sexual humor. “