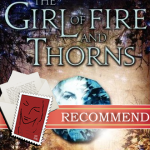 Because the book is awesome. Seriously at this price, you would be foolish not to buy it. We reviewed the book here and it was part of the DABWAHA tourney as a YA finalist. From my review:

Princess Lucero-Elisa of Oravalle is the younger of two sisters. She’s fat and unattractive but she was born with a Godstone in her belly, a mark that comes only once a century. This is a mark that means she is destined for greatness. The story opens on the day of Elisa’s marriage to King Alejandro de Vega, the king of the desert country, Joya d’Arena. Elisa believes (and rightly so) the only reason that she is being married to this handsome king is because of her Godstone. Her sister, Juana-Alodia, is so much more capable and ready to be Queen.

Once a century, one person is chosen for greatness.

Elisa is the chosen one.

But she is also the younger of two princesses. The one who has never done anything remarkable, and can’t see how she ever will.

Now, on her sixteenth birthday, she has become the secret wife of a handsome and worldly king—a king whose country is in turmoil. A king who needs her to be the chosen one, not a failure of a princess.

And he’s not the only one who seeks her. Savage enemies, seething with dark magic,are hunting her. A daring, determined revolutionary thinks she could be his people’ssavior, and he looks at her in a way that no man has ever looked at her before. Soon it is not just her life, but her very heart that is at stake.

Elisa could be everything to those who need her most. If the prophecy is fulfilled. If she finds the power deep within herself. If she doesn’t die young. 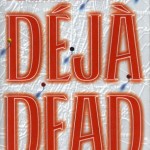 I think this is the first book in the Temperance Brennan series? I watch Bones even though I think David Boreanz is a terrible human being for cheating on his wife while she was pregnant. Some sort of karmic retribution HAS to occur to those men, right? Ironically, I believe he cheated on his wife with the same woman that was Tiger Wood’s mistress. That aside, I enjoy the tv show despite its ridiculous story lines and half assed medicine. Surely the book has to be better?

The raves are in — from Edgar-winning authors and internationally acclaimed forensic experts: Kathy Reichs and Déjà Dead are something special.Rarely has a debut crime novel inspired such widespread excitement. A born storyteller, Dr. Kathy Reichs walks in the steps of her heroine, Dr. Temperance Brennan. She spends her days in the autopsy suite, the courtroom, the crime lab, with cops, and at exhumation sites. Often her long days turn into harrowing nights.
It’s June in Montreal, and Tempe, who has left a shaky marriage back home in North Carolina to take on the challenging assignment of director of forensic anthropology for the province of Quebec, looks forward to a relaxing weekend.

First, though, she must stop at a newly uncovered burial site in the heart of the city. One look at the decomposed and decapitated corpse, stored neatly in plastic bags, tells her she’ll spend the weekend in the crime lab. This is homicide of the worst kind. To begin to find some answers, Tempe must first identify the victim. Who is this person with the reddish hair and a small bone structure? 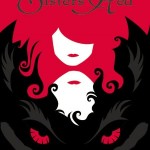 This appears to be a retelling of Little Red Riding Hood. It received a starred review from the Library Journal. The story is told from the sisters’ alternating points of view with a romance between Rosie and Silas. Says Booklist “Despite plenty of gore and werewolf transformations, it’s the compelling love stories that drive the tale—the sisters’ affection for each other, the first breathless flush of infatuation between Rosie and Silas, and Scarlett’s love of the hunt.”

Scarlett March lives to hunt the Fenris–the werewolves that took her eye when she was defending her sister Rosie from a brutal attack. Armed with a razor-sharp hatchet and blood-red cloak, Scarlett is an expert at luring and slaying the wolves. She’s determined to protect other young girls from a grisly death, and her raging heart will not rest until every single wolf is dead.

Rosie March once felt her bond with her sister was unbreakable. Owing Scarlett her life, Rosie hunts ferociously alongside her. But even as more girls’ bodies pile up in the city and the Fenris seem to be gaining power, Rosie dreams of a life beyond the wolves. She finds herself drawn to Silas, a young woodsman who is deadly with an ax and Scarlett’s only friend–but does loving him mean betraying her sister and all that they’ve worked for? 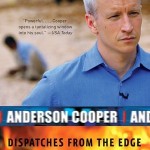 Dispatches from the Edge by Anderson Cooper. $ 2.99.

Anderson Cooper recently came out in an email to Andrew Sullivan confirming that Anderson was gay. I didn’t realize this was a secret but apparently his coming out was a big deal and the internets congratulated him. I liked Buzzfeeds gif collection of reactions to the news the best.

Few people have witnessed more scenes of chaos and conflict around the world than Anderson Cooper, whose groundbreaking coverage on CNN has changed the way we watch the news. In this gripping, candid, and remarkably powerful memoir, he offers an unstinting, up-close view of the most harrowing crises of our time, and the profound impact they have had on his life.

After growing up on Manhattan’s Upper East Side, Cooper felt a magnetic pull toward the unknown, an attraction to the far corners of the earth. If he could keep moving, and keep exploring, he felt he could stay one step ahead of his past, including the fame surrounding his mother, Gloria Vanderbilt, and the tragic early deaths of his father and older brother. As a reporter, the frenetic pace of filing dispatches from war-torn countries, and the danger that came with it, helped him avoid having to look too closely at the pain and loss that was right in front of him.

But recently, during the course of one extraordinary, tumultuous year, it became impossible for him to continue to separate his work from his life, his family’s troubled history from the suffering people he met all over the world. From the tsunami in Sri Lanka to the war in Iraq to the starvation in Niger and ultimately to Hurricane Katrina in New Orleans and Mississippi, Cooper gives us a firsthand glimpse of the devastation that takes place, both physically and emotionally, when the normal order of things is violently ruptured on such a massive scale. Cooper had been in his share of life-threatening situations before — ducking fire on the streets of war-torn Sarejevo, traveling on his own to famine-stricken Somalia, witnessing firsthand the genocide in Rwanda — but he had never seen human misery quite like this. Writing with vivid memories of his childhood and early career as a roving correspondent, Cooper reveals for the first time how deeply affected he has been by the wars, disasters, and tragedies he has witnessed, and why he continues to be drawn to some of the most perilous places on earth.

Striking, heartfelt, and utterly engrossing, Dispatches from the Edge is an unforgettable memoir that takes us behind the scenes of the cataclysmic events of our age and allows us to see them through the eyes of one of America’s most trusted, fearless, and pioneering reporters. (From the publisher.)