Daily Deals: The Spindle Cove series, a great PNR, and a book of vulgar comedy 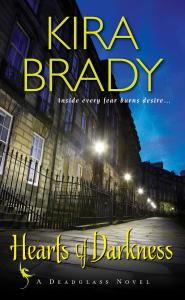 In the first of a dazzling new romantic trilogy, one woman’s courageous search plunges her into a millennia-old supernatural war—and an irresistible passion. . .

Nurse Kayla Friday has dedicated her life to science and reason. But for her, Seattle is a place of eerie loss and fragmented, frightening memories. And now the only clue to her sister’s murder reveals a secret battle between two ancient mythologies. . .and puts Kayla in the sights of lethally-sexy werewolf mercenary Hart. He’ll do whatever it takes to obtain the key to the Gate of the Land of the Dead and free what’s left of his soul. But seducing the determined Kayla is putting them at the mercy of powerful desires neither can control. And as the clock ticks down to hellish catastrophe, the untested bond between Kayla and Hart may lead to the ultimate sacrifice.

I really enjoyed this book. I felt it had a good balance between worldbuilding and romance.

The myths are part Norse, part Babylonian, part Native American.  The characters could be read of any race. (I envisioned Kayla and her sister as black by their hair coloring, skin, and eyes but they could have also been Native American as well).  I’ve spent a lot of time talking about the world building, but the romance is strong and sexy and angst filled.  My biggest complaint was the ending.  I didn’t feel like I quite had enough setup to buy into what happens to a certain character.  It didn’t ruin the book for me by any means, but it seemed too tidy a conclusion.  However, I can’t wait for the next Deadglass novel.  What a debut. A- 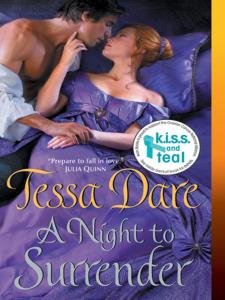 Welcome to Spindle Cove, where the ladieswith delicate constitutions come for the sea air,and men in their prime are . . . nowhere to be found.

Spindle Cove is the destination of choice forcertain types of well-bred young ladies: the painfully shy, young wives disenchanted with matrimony,and young girls too enchanted with the wrong men; it is a haven for those who live there.

Victor Bramwell, the new Earl of Rycliff,knows he doesn’t belong here. So far as he can tell, there’s nothing in this place but spinsters . . .and sheep. But he has no choice, he has orders togather a militia. It’s a simple mission,made complicated by the spirited, exquisiteSusanna Finch—a woman who is determined tosave her personal utopia from the invasion ofBram’s makeshift army.

Susanna has no use for aggravating men;Bram has sworn off interfering women. The sceneis set for an epic battle…but who can be namedthe winner when both have so much to lose?

This is the first in the Spindle Cove series. These are all worth picking up at $.99 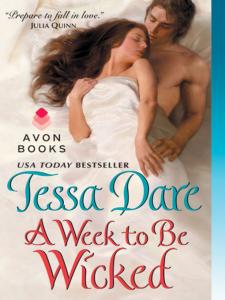 When a devilish lord and a bluestocking set off on the road to ruin . . . time is not on their side.

Minerva Highwood, one of Spindle Cove’s confirmed spinsters, needs to be in Scotland.

Colin Sandhurst, Lord Payne, a rake of the first order, needs to be . . . anywhere but Spindle Cove.

These unlikely partners have one week:
to fake an elopement
to convince family and friends they’re “in love”
to outrun armed robbers
to survive their worst nightmares
to travel four hundred miles without killing each other

All while sharing a very small carriage by day and an even smaller bed by night.

What they don’t have time for is their growing attraction. Much less wild passion. And heaven forbid they spend precious hours baring their hearts and souls.

Suddenly one week seems like exactly enough time to find a world of trouble. And maybe . . . just maybe . . . everlasting love.

This is the 2nd book in the Spindle Cove Series 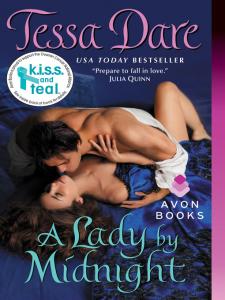 A temporary engagement, a lifetime in the making . . .

After years of fending for herself, Kate Taylor found friendship and acceptance in Spindle Cove-but she never stopped yearning for love. The very last place she’d look for it is in the arms of Corporal Thorne. The militia commander is as stone cold as he is brutally handsome. But when mysterious strangers come searching for Kate, Thorne steps forward as her fiancÉ. He claims to have only Kate’s safety in mind. So why is there smoldering passion in his kiss?

Long ago, Samuel Thorne devoted his life to guarding Kate’s happiness. He wants what’s best for her, and he knows it’s not marriage to a man like him. To outlast their temporary engagement, he must keep his hands off her tempting body and lock her warm smiles out of his withered heart. It’s the toughest battle of this hardened warrior’s life . . . and the first he seems destined to lose. 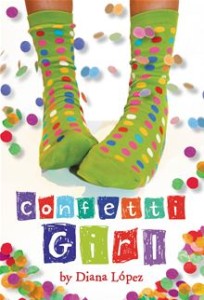 Apolonia “Lina” Flores is a sock enthusiast, a volleyball player, a science lover, and a girl who’s just looking for answers. Even though her house is crammed full of books (her dad’s a bibliophile), she’s having trouble figuring out some very big questions, like why her dad seems to care about books more than her, why her best friend’s divorced mom is obsessed with making cascarones (hollowed eggshells filled with colorful confetti), and, most of all, why her mom died last year. Like colors in cascarones, Lina’s life is a rainbow of people, interests, and unexpected changes.

In her first novel for young readers, Diana López creates a clever and honest story about a young Latina girl navigating growing pains in her South Texan city.

This is a middle grade book and more than one reviewer compared the author to Judy Blume. Says one librarian, I loved all the details of Lina’s Mexican-American community in Corpus Christi, Texas (and HOORAY for a book about Latino kids where race isn’t an issue). Lina’s got a lot to deal with, but the tone of the book is upbeat and I was regularly chuckling out loud. 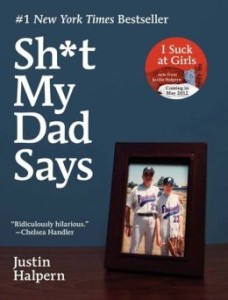 After being dumped by his longtime girlfriend, twenty-eight-year-old Justin Halpern found himself living at home with his seventy-three-year-old dad. Sam Halpern, who is “like Socrates, but angrier, and with worse hair,” has never minced words, and when Justin moved back home, he began to record all the ridiculous things his dad said to him:

“Do people your age know how to comb their hair? It looks like two squirrels crawled on their heads and started fucking.”

More than a million people now follow Mr. Halpern’s philosophical musings on Twitter, and in this book, his son weaves a brilliantly funny, touching coming-of-age memoir around the best of his quotes. An all-American story that unfolds on the Little League field, in Denny’s, during excruciating family road trips, and, most frequently, in the Halperns’ kitchen over bowls of Grape-Nuts, Sh*t My Dad Says is a chaotic, hilarious, true portrait of a father-son relationship from a major new comic voice.

This book started out as a Twitter feed, became a book, and even had a sitcom pilot made out of it, which apparently died. I have no idea if the book is any good. I remember the tweets being funny. I don’t think it reads very well as a story, but the individual lines seem priceless.