Daily Deals: A bonanza of deals

Google is having quite the blow out sale. 100 Bestsellers are 75% off. Yesterday I joked on Twitter about how much I was going to spend this weekend on books. I suspect it is going to be very high. I pulled out four that I thought were worth the money or interesting to me but here’s a list of some romances. If Amazon hasn’t reflected the discounted price, then report the lower price and Amazon will usually match it.

From the Jacket Copy:First in the all-new Cousins O’Dwyer Trilogy
From #1 New York Times bestselling author Nora Roberts comes a trilogy about the land we’re drawn to, the family we learn to cherish, and the people we long to love?

With indifferent parents, Iona Sheehan grew up craving devotion and acceptance. From her maternal grandmother, she learned where to find both: a land of lush forests, dazzling lakes, and centuries-old legends.

County Mayo, to be exact. Where her ancestors’ blood and magic have flowed through generations—and where her destiny awaits.

Iona arrives in Ireland with nothing but her Nan’s directions, an unfailingly optimistic attitude, and an innate talent with horses. Not far from the luxurious castle where she is spending a week, she finds her cousins, Branna and Connor O’Dwyer. And since family is family, they invite her into their home and their lives.

When Iona lands a job at the local stables, she meets the owner, Boyle McGrath. Cowboy, pirate, wild tribal horsemen, he’s three of her biggest fantasy weaknesses all in one big, bold package.

Iona realizes that here she can make a home for herself—and live her life as she wants, even if that means falling head over heels for Boyle. But nothing is as it seems. An ancient evil has wound its way around Iona’s family tree and must be defeated. Family and friends will fight with each other and for each other to keep the promise of hope—and love—alive?

Kati D gave this a thumbs up. It was discounted down to $4.79 at one point but this is the lowest since its release. This is one of the 100 Bestsellers that Google has discounted today and Amazon has price matched. 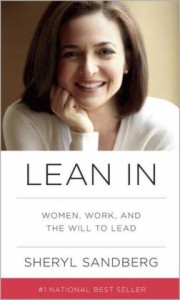 Thirty years after women became 50 percent of the college graduates in the United States, men still hold the vast majority of leadership positions in government and industry. This means that women’s voices are still not heard equally in the decisions that most affect our lives. In Lean In, Sheryl Sandberg examines why women’s progress in achieving leadership roles has stalled, explains the root causes, and offers compelling, commonsense solutions that can empower women to achieve their full potential.

Sandberg is the chief operating officer of Facebook and is ranked on Fortune’s list of the 50 Most Powerful Women in Business and as one of Time’s 100 Most Influential People in the World. In 2010, she gave an electrifying TEDTalk in which she described how women unintentionally hold themselves back in their careers. Her talk, which became a phenomenon and has been viewed more than two million times, encouraged women to “sit at the table,” seek challenges, take risks, and pursue their goals with gusto.

In Lean In, Sandberg digs deeper into these issues, combining personal anecdotes, hard data, and compelling research to cut through the layers of ambiguity and bias surrounding the lives and choices of working women. She recounts her own decisions, mistakes, and daily struggles to make the right choices for herself, her career, and her family. She provides practical advice on negotiation techniques, mentorship, and building a satisfying career, urging women to set boundaries and to abandon the myth of “having it all.” She describes specific steps women can take to combine professional achievement with personal fulfillment and demonstrates how men can benefit by supporting women in the workplace and at home.

Written with both humor and wisdom, Sandberg’s book is an inspiring call to action and a blueprint for individual growth. Lean In is destined to change the conversation from what women can’t do to what they can.

I know that Sandberg’s writings, interviews, and personal policies might be objectionable to some but I enjoyed this book. Sandberg hits on a lot of issues that women struggle with in their professions, whether it be writing or the law. She speaks of the imposter syndrome (the embarrassment of success and the fear of being exposed as a fraud), the tendency to downplay achievements, as well as a woman’s tendency to not speak up. It’s not that Sandberg’s book is gospel for every woman’s experience, but I did enjoy it. Wild: From Lost to Found on the Pacific Crest Trail by Cheryl Strayed. $ 2.49

At twenty-two, Cheryl Strayed thought she had lost everything. In the wake of her mother’s death, her family scattered and her own marriage was soon destroyed. Four years later, with nothing more to lose, she made the most impulsive decision of her life. With no experience or training, driven only by blind will, she would hike more than a thousand miles of the Pacific Crest Trail from the Mojave Desert through California and Oregon to Washington State—and she would do it alone. Told with suspense and style, sparkling with warmth and humor, Wild powerfully captures the terrors and pleasures of one young woman forging ahead against all odds on a journey that maddened, strengthened, and ultimately healed her.

I’ve been eying this book for a while so I guess it’s time to buy it. Cheryl started out with a pack that was half her weight and shoes that fit in the store but began to chafe almost immediately from being too tight. Both objects served as a metaphor for her journey. Her pack didn’t become lighter; she became stronger. 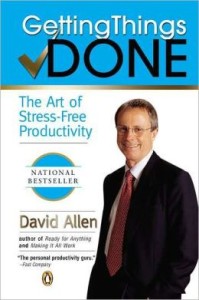 Getting Things Done: The Art of Stress-Free Productivity by David Allen. $ 3.29.

In today’s world of exponentially increased communication and responsibility, yesterday’s methods for staying on top of it all just don’t work. Veteran management consultant and trainer David Allen recognizes that “time management” is useless the minute your schedule is interrupted; “setting priorities” isn’t relevant when your e-mail is down; “procrastination solutions” won’t help if your goals aren’t clear. Instead, Allen shares with readers the proven strategies he has introduced in seminars across the country and at top organizations including Microsoft, Lockheed, and the U.S. Department of Justice. The key to Getting Things Done? Relaxation.
Allen’s premise is simple: our ability to be productive is directly proportional to our ability to relax.

The key to Getting Things Done? Relaxation.

Allen’s premise is simple: our ability to be productive is directly proportional to our ability to relax. Only when our minds are clear and our thoughts are organized can we achieve stress-free productivity.

When I touted the praises of Charles Duhigg’s Seven Habits book, a number of people recommended this one to me as well. Learning to relax? I might have a better time hiking the PCT with illfitting shoes and a heavy pack.