First up is some news for our Australian/New Zealand readers. ITunes is running a “home grown” romance promotion highlighting local Aussie and New Zealander authors. Here are the direct links:

And because Amazon can’t bear to be left out, it looks like they are price matching. Unfortunately, I can’t check the prices for any Aussie/NZ books.  Christina Brooke also emailed me to say that  Penguin Australia was discounting her backlist ebooks–HEIRESS IN LOVE, MAD ABOUT THE EARL and A DUCHESS TO REMEMBER (from $17 originally) to $4.99 and my new release LONDON’S LAST TRUE SCOUNDREL is $6.99. This is on Kindle, Kobo, iTunes, Google and other e-retailers. 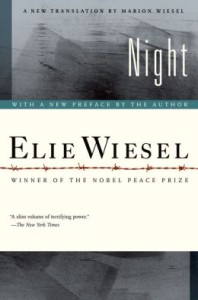 A New Translation From The French By Marion Wiesel

Night is Elie Wiesel’s masterpiece, a candid, horrific, and deeply poignant autobiographical account of his survival as a teenager in the Nazi death camps. This new translation by Marion Wiesel, Elie’s wife and frequent translator, presents this seminal memoir in the language and spirit truest to the author’s original intent. And in a substantive new preface, Elie reflects on the enduring importance of Night and his lifelong, passionate dedication to ensuring that the world never forgets man’s capacity for inhumanity to man.

Night offers much more than a litany of the daily terrors, everyday perversions, and rampant sadism at Auschwitz and Buchenwald; it also eloquently addresses many of the philosophical as well as personal questions implicit in any serious consideration of what the Holocaust was, what it meant, and what its legacy is and will be.

An autobiographical narrative in which the author describes his experiences in Nazi concentration camps, watching family and friends die, and how they led him to believe that God is dead.

I’ve heard a lot about this book. It’s one of those that I think I’ll read when I’m retired and have nothing to do but lie around the house all day reading books. 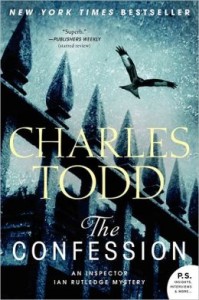 Declaring he needs to clear his conscience, a dying man walks into Scotland Yard and confesses that he killed his cousin five years ago during the Great War. When Inspector Ian Rutledge presses for details, the man evades his questions, revealing only that he hails from a village east of London. With little information and no body to open an official inquiry, Rutledge begins to look into the case on his own.

Fewer than two weeks later, the alleged killer’s body is found floating in the Thames, a bullet in the back of his head. Searching for answers, Rutledge discovers that the dead man was not who he claimed to be. What was his real name—and who put a bullet in his head? Were the “confession” and his own death related? Or was there something else in the victim’s past that led to his murder?

Booklist writes “Todd serves up plenty of period detail and plot twists, but the real attraction here is Rutledge, a shrewd, dedicated detective grappling with the demons of his past.” Sometimes you want someone so much…

Sometimes you need someone so much…

And love can turn into a deadly obsession.

Skye Sullivan knows that someone is watching her. Not just watching–stalking her. Months ago, Skye was involved in a dangerous car accident. The accident ended her dancing career and sent her fleeing back to Chicago. Skye is convinced that her stalker caused the crash, and she fears that he won’t stop pursuing her, not until she’s dead.

When someone breaks into her apartment in Chicago, Skye turns to the one man she believes can protect her–Trace Weston. Once, Trace was her lover. Two lost souls, they’d come together in a firestorm of need and desire. But then Trace had pushed her away. He’d joined the military, vanishing from her life. She’d put all of her emotion into dancing, and she’d tried to forget him.

Now Trace is one of the most successful men in the United States. Rich, driven, and carrying dark secrets, he agrees to help Skye. He’ll protect her from the danger that lurks in the darkness, but Trace wants more than to just be a guard for Skye.

He wants her. And he’ll take her. The years have changed him, hardened him. He’s not just a poor kid from the streets any longer. Now, he can have anything–or anyone–that he wants. And the one woman he has always wanted has just come back into his life. He won’t let her go again.

But with the threats mounting against Skye, she suspects that her stalker may be intimately close. He’s a man who knows her too well. As his attacks grow ever more dangerous, she realizes that if she trusts the wrong man, she could be making a fatal mistake.

Just how far would you go in order to possess the one person you want the most?

Author’s Note: MINE TO TAKE is a sexy romantic suspense novella–it contains approximately 41,000 words. MINE TO TAKE is intended for adults. Sexy situations and adult language will be found within the pages of this story–please consider yourself warned.

This is a novella but it is a fairly good length one. The author recently hit the USA Today list with this book, probably in part due to the lowered price. 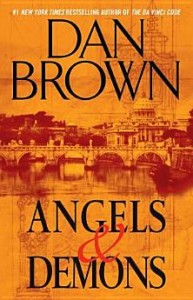 A devastating new weapon of destruction.

When world-renowned Harvard symbologist Robert Langdon is summoned to a Swiss research facility to analyze a mysterious symbol — seared into the chest of a murdered physicist — he discovers evidence of the unimaginable: the resurgence of an ancient secret brotherhood known as the Illuminati…the most powerful underground organization ever to walk the earth. The Illuminati has now surfaced to carry out the final phase of its legendary vendetta against its most hated enemy — the Catholic Church.

Langdon’s worst fears are confirmed on the eve of the Vatican’s holy conclave, when a messenger of the Illuminati announces they have hidden an unstoppable time bomb at the very heart of Vatican City. With the countdown under way, Langdon jets to Rome to join forces with Vittoria Vetra, a beautiful and mysterious Italian scientist, to assist the Vatican in a desperate bid for survival.

Embarking on a frantic hunt through sealed crypts, dangerous catacombs, deserted cathedrals, and even the most secretive vault on earth, Langdon and Vetra follow a 400-year-old trail of ancient symbols that snakes across Rome toward the long-forgotten Illuminati lair…a clandestine location that contains the only hope for Vatican salvation.

An explosive international thriller, Angels & Demons careens from enlightening epiphanies to dark truths as the battle between science and religion turns to war.

Entertaining even if historically inaccurate. Does this qualify as a wallpaper?

→ Jane
Previous article: REVIEW: On the Edge by Ilona Andrews
Next Post: First Page: You Stole My Heart