Daily Deals: 2 classics and 2 republished digital backlist titles for $.99 each 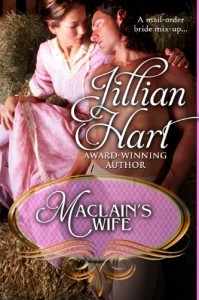 The Sheriff and the Outlaw

Polly Brown was nothing like typical women whose only dream was to marry and start a family. The daughter of a notorious outlaw, Polly grew up wearing six-guns and learning to ride horses and cook over an open fire. But while being pursued by an enemy with a grudge, Polly decides her best option is to pose as a mail-order-bride. In the disguise of a proper lady, she knows there is no way her enemy will recognize her. Little does Polly know that the husband waiting for her is the handsome sheriff of Indian Trails.

Sheriff Ben MacLain isn’t a man to be easily fooled. He quickly realizes that Polly is not who she says, but Ben after seeing how quickly his daughter has taken to Polly, he finds himself in on hurry to send her away. Instead he tries to strike a deal: marriage or jail. With outstanding warrants for Polly’s arrest, Ben knows this may be his only chance to convince Polly to stay, and although he plans to have a marriage of convenience for the sake of his daughter, the passion that draws the two together cannot be denied.

Originally published in 2000 by Zebra Kensington, Hart republishes the digital version. One of the three star reviews characterizes this book as fun but somewhat unrealistic. The characters are likeable and she was rooting for their HEA. That’s about all you can expect from a 99c book, right? 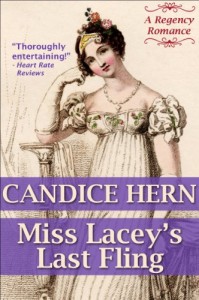 Customers who enjoy the traditional Regency Romances of Georgette Heyer, Barbara Metzger, and Carla Kelly will enjoy this witty, award-winning Regency romp by New York Times bestselling author Candice Hern. Miss Rosalind Lacey has spent all her 26 years in the country, quietly managing the lives of her widowed father and five younger siblings. When she learns she has contracted the illness that killed her mother, she decides to spend her last few months doing all the things she’s never had the time or opportunity to experience. With the help of her worldly and notorious aunt, the simple country miss is transformed into a dashing Town sophisticate who cuts a wide and wild swath through London Society. Since she won’t be around to face the consequences of her behavior, Miss Lacey does and says exactly what she pleases, even becoming involved with the infamous rake, Max Davenant. It is an exciting and heady time for the one-time country mouse, until she receives a fateful letter bearing news that turns her glittering new world upside down. The ballrooms and gaiety of the London Season form a backdrop for this sparkling tale of a young woman who hasn’t lived enough, and a man who’s lived too much.

I thought this review at Amazon was useful:

Basically it was an entertaining read but had a few issues. “I enjoyed this book, the second I’ve read by Hern. However, a few niggles left me unable to rate it more highly. The diagnosis of Rosalind’s ‘illness’ was badly handled; why would any doctor confirm something the nature of which he wasn’t aware of? Rosalind’s status as an instant hit at balls and so on was surprising, considering her age; she would more likely have been sniggered at as an ape-leader or something. And I couldn’t take seriously her sudden flight and rejection of Max once she knew that she wasn’t sick after all.” 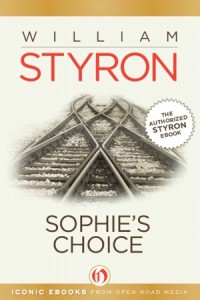 Winner of the 1980 National Book Award, Sophie’s Choice is William Styron’s classic novel of love, survival, and regret, set in Brooklyn in the wake of the Second World War. The novel centers on three characters: Stingo, a sexually frustrated aspiring novelist; Nathan, his charismatic but violent Jewish neighbor; and Sophie, an Auschwitz survivor who is Nathan’s lover. Their entanglement in one another’s lives will build to a stirring revelation of agonizing secrets that will change them forever.

Poetic in its execution, and epic in its emotional sweep, Sophie’s Choice explores the good and evil of humanity through Stingo’s burgeoning worldliness, Nathan’s volatile personality, and Sophie’s tragic past. Mixing elements from Styron’s own experience with themes of the Holocaust and the history of slavery in the American South, the novel is a profound and haunting human drama. The result is Styron at the pinnacle of his literary brilliance.

This ebook features a new illustrated biography of William Styron, including original letters, rare photos, and never-before-seen documents from the Styron family and the Duke University Archives.

It’s a classic. Says the most helpful review on Amazon “Styron balances Sophie’s tragic past with her tragic present in Brooklyn. In love with Nathan, a brilliant drug addict subject to violent fits of jealousy, Sophie has no chance of building a “normal” life in America. But, given her experiences in the concentration camp, it is impossible to imagine how she could. Rather than present an unbelievable fairy tale of survival, Styron uses the tortured relationship between Nathan and Sophie as the catalyst for her revelations to Stingo, as well as the vehicle of her ultimate, and well-foreshadowed, undoing.”

The ePub version can be purchased at Google for $.99 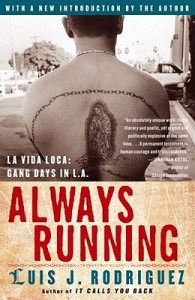 Luis J. Rodríguez joined his first gang at age eleven. As a teenager, he witnessed the rise of some of the most notorious cliques and sets in Southern California and knew only a life of violence—one that revolved around drugs, gang wars, and police brutality. But unlike most of those around him, Rodríguez found a way out when art, writing, and political activism rescued him from the brink of self-destruction.

Always Running spares no detail in its vivid, brutally honest portrayal of street life and violence, and it stands as a powerful and unforgettable testimonial of gang life, by one of the most acclaimed Chicano writers of his generation.

This ebook features an illustrated biography of Luis J. Rodríguez including rare images from the author’s personal collection.

I don’t buy every deal I present to you guys because I would go broke if I did but this one I did. I love what this goodreads review said

“Rodriguez speaks from his own experience, acknowleding his own mistakes without exactly apologizing for them. In general, there’s not a whole lot of editorializing, the author simply describes the events as he remembers them. While you could look at Always Running as street-journalism, I think that’s really selling it short; the book is filled with characters you actually care about, and that, for any writer, is no easy trick”

The ePub version can be purchased at Google for $.99