Note: the publication of deals will return to 2:0o pm CST after today. 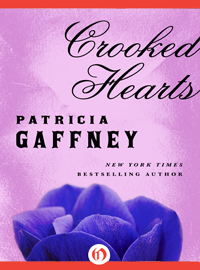 In a stagecoach en route to San Francisco, Grace Rousselot is posing as a nun to drum up “donations” from fellow travelers. Across from her, Reuben Jones is faking blindness to prey on unsuspecting travelers. Both grifters are surprised to learn that they have competition, and even more surprised when their stagecoach is ambushed and robbed, leaving them both flat broke.

Not keen to discuss the robbery with the police, Reuben and Grace decide to work together to recoup some of their losses. Soon enough, what starts out as a practical partnership evolves into something more. And with the Chinese mafia hot on their heels, neither is sure just how far they can trust a man—or a woman—with a crooked heart.

Everything in the Open Road Media catalog is on sale for 80% off. For romance readers, that includes authors like Heather Graham, Mary K McComas, Patricia Gaffney, Andrea Kane, and Nan Ryan. We’ve also reviewed a few Barbara Hambly titles favorably.

Jennie gave Crooked Hearts a B+. 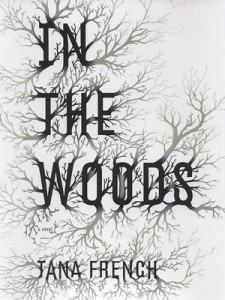 As dusk approaches a small Dublin suburb in the summer of 1984, mothers begin to call their children home. But on this warm evening, three children do not return from the dark and silent woods. When the police arrive, they find only one of the children gripping a tree trunk in terror, wearing blood-filled sneakers, and unable to recall a single detail of the previous hours.

Twenty years later, the found boy, Rob Ryan, is a detective on the Dublin Murder Squad and keeps his past a secret. But when a twelve-year-old girl is found murdered in the same woods, he and Detective Cassie Maddox—his partner and closest friend—find themselves investigating a case chillingly similar to the previous unsolved mystery. Now, with only snippets of long-buried memories to guide him, Ryan has the chance to uncover both the mystery of the case before him and that of his own shadowy past.

Richly atmospheric, stunning in its complexity, and utterly convincing and surprising to the end, In the Woods is sure to enthrall fans of Mystic River and The Lovely Bones. And look for French’s new mystery, Broken Harbor, for more of the Dublin Murder Squad.

Bought this for Ned. I’ve heard the Tana French mysteries are fantastic. 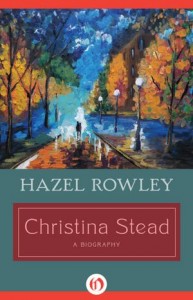 Hailed as “everything a literary biography should be,” Christina Stead is a stirring and tragic account of the life of the incomparable writer

Like the author herself, Christina Stead’s novels were challenging and engrossing. Raised by a narcissistic father, Stead left for London at the age of twenty-six and soon met William Blake, a writer, broker, and Marxist political economist who became her life partner. His personal ambitions and their politics resulted in a nomadic existence, with Stead sidestepping the traditional feminine role in exchange for a career. She struggled to find an audience for her work, however, only succeeding late in life with the reissue of The Man Who Loved Children. Hazel Rowley’s richly detailed and even-handed biography spans Stead’s life, expertly blending her encoded personal papers with interviews of her closest confidants. Masterfully written and researched, Christina Stead is a fascinating chronicle of one of the twentieth century’s greatest novelists.

This is another Open Road Media title. I highlighted it because it would a) make a great gift book and b) it sounds pretty fascinating albeit tragic. 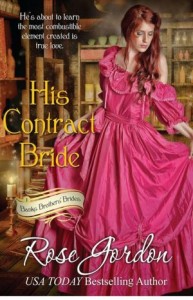 Edward Banks, Lord Watson has known most of his life that one day Regina Harris was to be his bride–but somebody forgot to inform her…

An avid academic and aspiring scientist, Edward is pleased to find that he won’t have to bother with the nonsense involved in courting a young lady.

Young and naive, it doesn’t take much for her social-climbing father to convince Regina the gentleman she’s to marry has requested her hand out of love, but devastates her when she learns the truth.

Now, it’s up to a gentleman who’s more comfortable in a conservatory than a drawing room to prove to Regina that she’s more than just the proverbial sacrificial lamb that helped gain her family their foot in Society’s door and that he–if no other gentleman–is trustworthy. But he just might be the one doing the learning as he’ll be forced to acknowledge that sometimes the most combustible elements aren’t the ones you control, but sometimes the ones you don’t.

This looks to be a self published book. The book has almost all positive reviews, although not many of them, so it is hard to judge whether this would be a satisfying read. I did like the idea of the scientist hero.

→ Jane
Previous article: Monday News: New stalking laws in the UK; Useless Websites; Integrity of science journals in jeopardy; Algorithms misused
Next Post: REVIEW: With Everything I Am by Kristen Ashley