Daily Deals: A range of romances from 3.99 and under 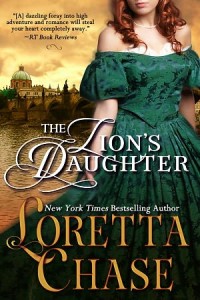 Gorgeous, stubborn Esme Brentmor, daughter of a disgraced lord, is used to a wild, dangerous life among the tribes of Albania, to whom her father is the legendary, controversial Red Lion whose death she’s courageously vowed to avenge –even if it leads to her own. Instead, her quest finds her rescued by the most unlikely (and very reluctant) hero!

Lazy and spoiled, Lord Varian St. George has gambled away his heritage and lives on his considerable looks, charm and wits. All he wants is the good life, and instead, he finds himself in rough country, with a tempestuous whirlwind of a female who’s as savage as he’s civilized. How did this termagant become his responsibility? And how can he escape?! Yet as he and Esme plunge headlong into even more peril, he may surprise even his own jaded self and become the man that Esme (foolishly) believes he is!

Jennifer Lohmann says “it felt too much like a madcap Laura Kinsale plot without the over-the-top emotions of Kinsale to go with it.” 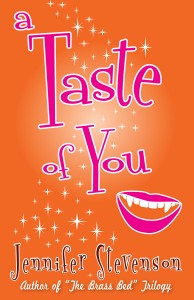 A Taste of You by Jennifer Stevenson. $ 2.99 at Bookview Cafe

A roller derby vampire romance set in Hinky Chicago from the author of The Brass Bed.

Hel is an energy vampire. Nick is an anti-magic cop. Hel loves Nick’s yummy energy. Nick is aroused by magic. If he figures her out, he’ll send her to Hinky Guantanamo. But can they keep their hands off each other?

When Hel was seventeen, she found a magic coin that granted her wish and made her into an energy vampire. Shortly after that, she had her first sex–and reduced the poor guy to ashes. Forty years later, Hel still looks seventeen. She’s teaching hyperactive children for entry-level pay, skating roller derby for the extra energy it generates, and worrying how to pay her mother’s mounting hospital bills.

Nick Jones switched from normal cop to federal anti-magic cop when his family died in the magic blitz that destroyed Pittsburgh.

Jennifer Stevenson is offering a special $2 off DA-only couponthrough the end of November.  Use coupon code ATASTEOFYOU-$2OFF-2012-DA at Bookview Cafe. 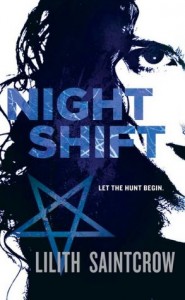 Not everyone can take on the things that go bump in the night.

But Jill Kismet is not just anyone.

She’s a Hunter, trained by the best – and in over her head.

Welcome to the night shift…

Jia gave this a C

One thing I did especially like was how the gender roles in the Jill and Saul relationship were flipped. Their relationship reminds me of those movies where the jaded, world-weary killer finds a gentle, kind woman to take care of him: tending his wounds, cooking his meals, cleaning his house. That said, I really would have liked to see more of why Saul decided to settle on Jill. As a shapeshifter, there are some definite complications in his choosing her and since I had a difficult time grasping Jill, I could not understand why he’d bother. It felt like he went from snarling at her to treating her like a mate in the blink of an eye. Even though the story is told from Jill’s point of view, I needed a few more clues to fully buy the romantic subplot. 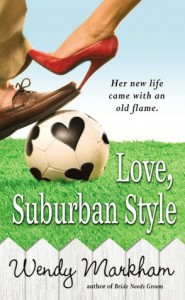 Fed up with her moody teenage daughter, Meg Addams decides what they both need is a good dose of suburban wholesomeness. But when they leave Manhattan behind for Meg’s humble blue-collar hometown, they find it crowded with wealthy strangers and upscale boutiques. Settling into a creaky fixer-upper, Meg finally spots a familiar face right next door—and it belongs to none other than Sam Rooney. The would-be love of Meg’s high school life is now a single dad, her daughter’s new soccer coach—and a neighborly ghost-buster whenever things go bump in the night. With three kids and an undeniable attraction between them, Meg and Sam are in for some heart-racing, wee-hour encounters that have nothing to do with spirits…but everything to do with hearts.

Apparently this is the pseudonym for Wendi Corsi Staub who writes suspense for Avon. (Her husband spams readers on Goodreads too) The reviews indicate that the characters are likeable but the plot is predictable and cliched.